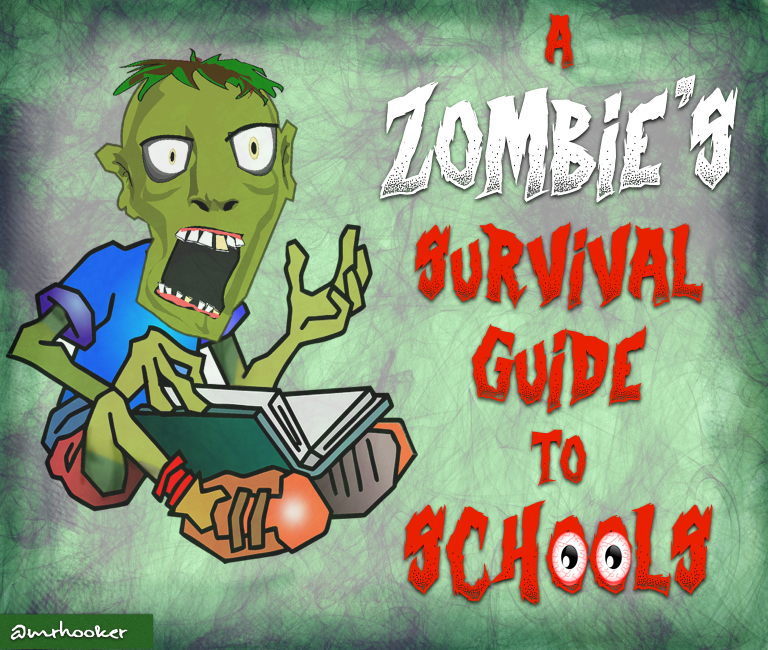 In honor of the return of the hit TV show The Walking Dead and my general love of zombie lore, I thought I would post this somewhat tongue-in-cheek “A Zombie’s Survival Guide to Schools.”

As a zombie limping through the world looking for a good meal, a school may seem like a good place to start. Lots of people trapped in a building for an entire day sounds very appetizing, but you might need to beware of some traps. Follow these tips and you might be able to survive.

I’ve written an obituary for these pieces of common classroom furniture in the past, but as a zombie, you might want to be aware. These devices are meant for restraint and order, so if you should stumble into a classroom and make your way into one of these desks, you might never get out. Try and find some classrooms with more flexible and mobile furniture.  Not only will the brains be more engaged and tasty, you won’t fall into any of those old deathtraps known as the all-in-one desk.

Like I said above, any zombie looking for good brain always knows that they have a fresher taste after the bodies that accompany them have some sort of movement. In a traditional classroom with those all-in-one desks, this might be hard to find, but with recent research about the positive effects of movement and the brain, more and more classrooms are integrating #brainbreaks into their daily routine.  Look for these classrooms as you groan your way through the halls of the school.

One of the best ways to kill a zombie is a sharp stick or knife to the skull. As weapons aren’t allowed in schools, this means there are fertile feeding grounds to safely roam and moan through the halls. Except for one time of year…standardized testing season. Not only are the brains less tasty then (see above comment) but the students come armed with super sharp No. 2 pencils to bubble in their scantrons.  Sure there are other times throughout the school year where kids use pencils for learning, writing, sketching and creating, but during this time of year, with the brains pretty well drained, it might be best to avoid visiting a school during testing season. Don’t believe me? Watch my mini-keynote about #Undeadlearning.

This survival tip is actually the same for the living as it is for the dead. I don’t know what happens in there, but it’s almost impossible to leave without some sort of combo-stench of urine and lysol. Don’t be an embarrassment to your other undead friends by dragging through the halls with a piece of toilet paper stuck to your gnarled foot.

More and more classrooms are putting mobile devices in the hands of their students. This can be a great thing for students, but sometimes the way the devices are used can make them more powerful (and dangerous for zombies).  In classrooms where they are only used for consumptive tasks, you can venture safely. However, if the students are using them for research and creative pursuits….beware.  They may discover a ways to survive the zombie apocalypse which would mean the end for you.  A student with an open mind, a problem to solve, and a piece of mobile technology can be a dangerous thing for zombies.

While you might think it’s cute to take a “Zelfie” with your latest victim, remember, what you post online sticks with you long after you have died, even a second time. Best to just keep focused on your prey. Besides, there are clowns on there now and they are even more creepy than zombies.

Tip #7 – Beware of the copy/break room

Most schools come equipped with rooms that contain a large number of paper (which can either cause multiple paper cuts or set fire to you) or worse, the dreaded paper cutter – a large machete essentially secured to a piece of wood. Some even have pots of two-to-three day old scalding hot black liquid that humans like to drink called “coffee” (and they make fun of us eating brains). Luckily most modern copy rooms no longer contain the deadly odor of Risograph ink (unfortunate for the teachers that liked the smell, but good for you), but you’ll still need to proceed with caution.  Teachers can get moody waiting for their copies or their coffee, so you’ll want to steer clear of many of these rooms while in school.

Of course, technology can help you during your visit into schools.  A couple of the most popular apps out there amongst the zombie youth. If you are looking to lose a little weight after your latest meal, why not download the Zombies, Run! app for your smartphone (assuming the battery isn’t DEAD). Or if you really want to fit in, try something that combines augmented reality with the latest robotic/STEM movement and download the “Rolling Dead” by Sphero.  It’s entertaining and you might learn a thing or two about coding while you are at it.  Who ever said a dead brain can’t learn?

These tips are intended to help you survive your stay in the schools today.

Ultimately, it’s up to you whether you take my advice.

Best of luck and break another leg.

0 comments on “A Zombie’s Survival Guide to Schools”