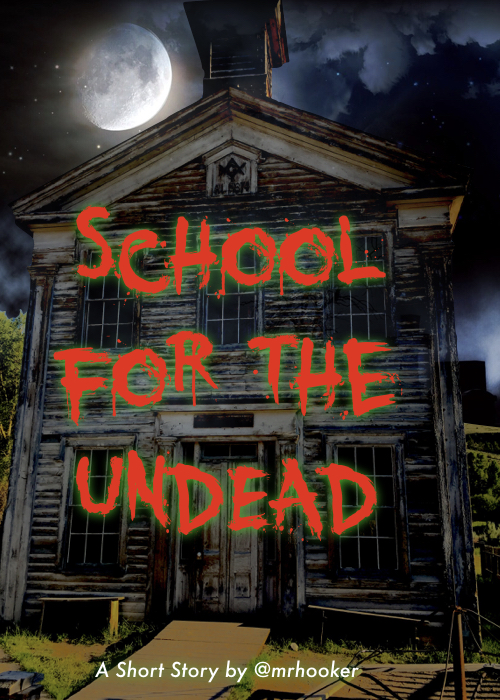 As I approached the my new school, I had some serious apprehension. Why did mom make me transfer to Zed Middle School? None of my friends were here and the stories about this school were unreal. Scary stories. Stories I really don’t want to believe.

There were rumors of vampires living in the attic and strange creatures living in the basement. Stories about detention being one of those spike-enclosed coffins where you couldn’t move without fear of losing a limb. As I walked into the front doors a loud creeeeeeak echoed down the dusty and cobweb-filled hallways. Were the stories true? Or were they worse?

The front office secretary was a witch. I’m not sure if this was because today was October 31st or if she was an actual witch, but after speaking with her, I supposed it was the latter.

“Where’s your transfer slip?!?” she screeched.

“YOUR TRANSFER SLIP!” she bellowed.

“Oh, you mean this?” and I handed her the slip of paper that had come with me from Viva Middle School, along with my tattered backpack and my Ghostbusters trapper keeper.

I approached my first class and looked for room 666. Frank N. Stein had been a teacher at this school for what must have seemed like hundreds of years. His style of teaching was a mash up of body parts and trendy instructional approaches of years past. Think Madeline “Vampire” Hunter-style with some SAMR (Scary Anthrax Mummified Ruins) model thrown in for good measure.

My teeth were starting to chatter as I made my way towards my seat where my first of a series of horrors would begin. Unlike the nice flexible furniture at Viva Middle, the desks in these schools were akin to all-in-one torture devices. A metal arm bar dug into my ribs as I sat on the hard, flat chair. My back began to ache but I dare not move.

That’s when I noticed it.

All the kids had their heads down, noses buried in their textbooks. I looked at the kid to my left. He had blood coming out of his ears.

“Um, excuse me,” I whispered, “you have blood coming out of your ears.”

His eyes seemed to have a cloudy haze over them and brownish-drool began to drop from his mouth. I looked around the room frantically for help. All the students seemed to be in a dazed stupor as they looked at their Fearson textbooks. Mr. Stein continued to speak to the class in what seemed like some sort of spell or chant. I leaned forward and tapped on the shoulder of the student in front of me. She turned to reveal greenish, torn skin and black teeth.

“Arrrrrrraaaach” she growled as her head turned and red eyes looked me up and down like a piece of meat.

What is this place? Where am I?

The next class wasn’t much better. In fact, it was worse. The teacher was some sort of banshee. You couldn’t see her face through her stringy black hair and she walked almost like in fast-forward at times. Jumping around the room from desk to desk. In her hands, she clutched a piece of paper with lots of little dots on it.

Oh no. I had heard rumors of these. The scrolls of the dead. They were called Scaretrons. Little bewitched pieces of paper that you have to fill out with blood and slowly suck away your soul.

It was at that moment that I realized where I was.

Zed was a school for the undead.

And the soul-sucking high stakes assessments filled out via Scaretron.

This was not a place to learn. This was a place where brains go to die.

0 comments on “School for the UnDead”