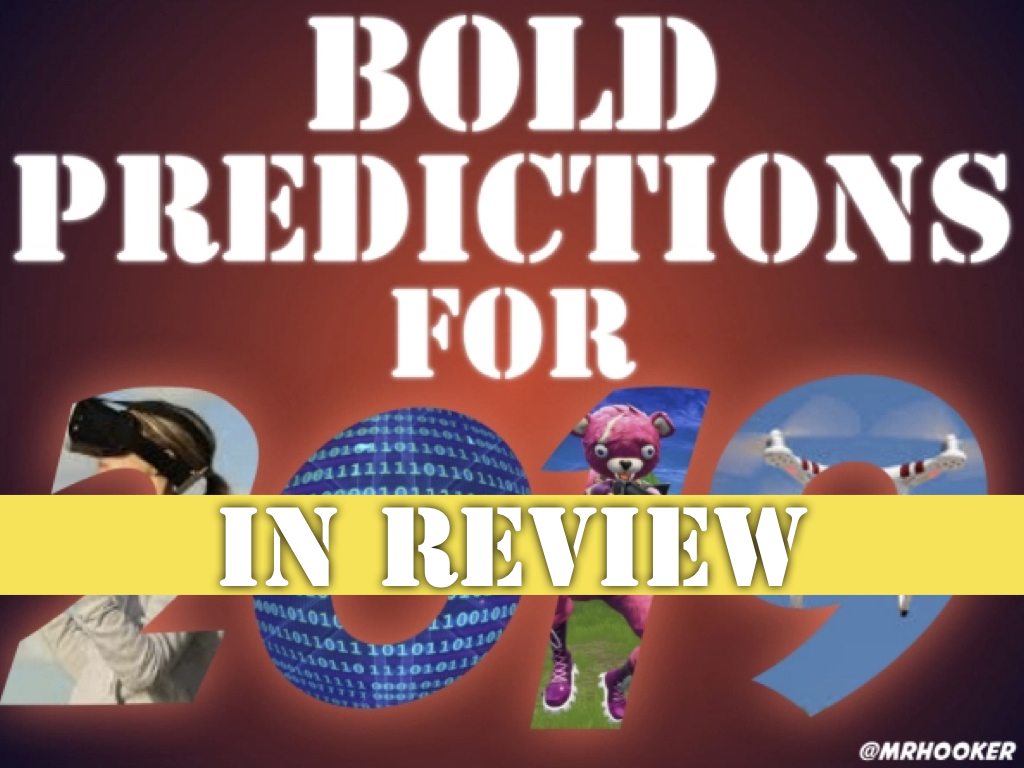 For the past several years I’ve made an attempt to make some bold predictions on the future of technology and its impact in schools and society. They range from semi-realistic to too-silly-to-be-true, but ironically, some do come true. Before I post my list for 2020, it’s always good to look back and judge how I did. After all, the internet never forgets, so I might as well own my mistakes.

While some would say this post is a bit of a softball toss considering VR has been around for more than a decade, recent explosions in inexpensive hardware has made it much more attainable. I still think we are only scratching the surface of this prediction and will be interested to see how it progresses in 2020.

Outcome: No lo creo (translation: I don’t think so)

Like most new things in tech, the first generations of these translators are still pretty awful. I don’t think the foreign language department or language immersion schools have much to worry about…yet. However, my guess is people that worked for Blockbuster thought similar things about Netflix and Redbox….and you see how that ended up.  Not very bueno.

Yes, this was a strange and morbid prediction loosely based on my story from the previous year of “When Smart Homes Attack“. However, about 2 months after I posted this, a retired firefighter actually returned to his home and found that his 3rd gen Echo Dot had set ablaze. While this wasn’t exactly what I predicted (my thought would be that some sort of stove would turn on by accident), it does raise awareness of the power of AI as we put it into our homes.

Prediction: Netflix will launch an EDU Version of its service

Outcome: Still out of service

While many other video streaming companies are out there vying for clicks and views, the major player in paid video streaming is still not taking my calls or emails to launch NetflixEDU. Sounds like a wasted opportunity to me or more than likely a way to avoid major copyright infringement by them. Some how, it has to work though…

It’s becoming more and more of a status symbol for fancy restaurants to block and ban cell phones to the supposed joy of patrons. However, it’s not just fancy restaurants doing this as I snapped this quick pic of a BBQ joint outside of Ft. Worth over the holidays. (blurry because as I took out my phone, someone yelled at me)

Prediction: Someone will write a blog/paper using only predictive text

Outcome: It has been predicted

This one was definitely silly, but I thought I would put it out there in the universe and even tried to write a sentence in predictive text. I will say, that my Gmail is getting smarter and smarter at completing my sentences for me (at what cost? who knows…) but we are still a few years off (maybe?) at this happening over an entire blog post. Yes there are tons of social media bots out there doing this to manipulate us daily (reminder folks, it’s 2020 – election time), but not a blog post. However, someone at the New Yorker took my idea an ran with it in this October 2019 article titled “The Next Word“. Close enough for a win for me!

Prediction: A couple will get married over Facetime

Outcome: Still illegal, but not for long

In doing some more digging around this prediction, technically it is possible to have a proxy marriage and Facetime could facilitate that. However, that still hasn’t happened. That said, it is interesting that there are a WIDE variety of Facetime marriage counselors out there…which is interesting.

Prediction: There will be a FortniteEDU for schools

I might have cheated on this one a tad as I know Mike Washburn was working on this behind the scenes. I chatted with him a bit last month while being interviewed on his recent OnEducation podcast and while we didn’t bring the topic up on air, he mentioned some recent developments on this front.  In December he posted a link on his twitter account (pic below) to Epic Games reaching hosting an Interactive 3D contest for teachers with likely more ideas to come.

Prediction: A SMART toilet will save someone’s life

Outcome: Not fully flushed-out yet

I’m a CES nerd, so when I saw these trending last year, I thought there might be a chance someone would buy one and have it save their life via early detection.  As of this writing, it hasn’t happened yet that I can find, but someone did write just a few weeks after my prediction about the future of these devices and our health. This prediction isn’t totally down the toilet yet(although my puns are starting to stink).

Prediction: LearnFestATX will again break the rules when it comes to a conference

Outcome: It was a game-changer (and ender)

Little did I know when I wrote that post that it would also mark the end of my 13-year tenure with Eanes ISD. However, we did do some pretty epic things to finish out the event including the still-never-attempted “Dueling Keynotes” using silent disco headphones. What a great way to end my run in the district and kick off the #NextChapter in my career as speaker/consultant. I’ll miss that event and iPadpalooza that came before it, but predict there might be other exciting events to lead in my near future…..stay tuned.

Outcome: We will See-3PO if it happens

I think this ground swell is continuing to grow and we’ll see more and more examples of teachers using inventive ways to use coding and robotics to showcase student learning. I’ve been lucky to advise on one of the companies (Trashbots) and have seen them really work hard at seamlessly integrating STEM into mainstream curriculum without a ‘heavy lift’ for classroom teachers. I’m excited to see where the future of this ends up in our schools.

Prediction: THIS will be the year my children’s book series actually gets published

I predicted this for 3 years and finally started down the path to production. By soliciting the help of best friend, fellow educator and amazing artist Chris Parker (@kreyus), I might have finally overcome the final roadblock holding this project back. Hoping for a summer launch of this new series as well as…wait….don’t want to give too much away. 🙂

So there you have it. Overall, 2019 wasn’t a bad year for my predictions although there were some surprises. I’ve got some ideas brewing for 2020 and will have those up in the next week but here’s a hint: It’s time to be BOLD.

0 comments on “A Look Back at Bold Predictions from 2019”