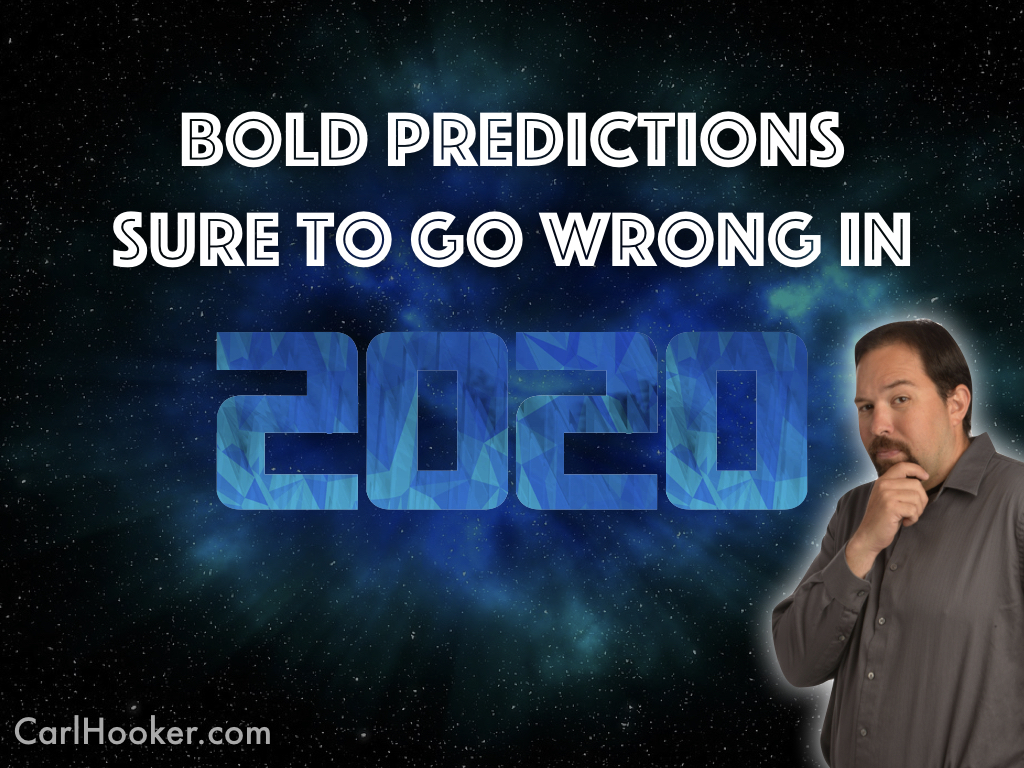 A new year AND a new decade.  WOW. That went by pretty fast. It feels like just last year I was in the classroom trying to figure out why the Reader Rabbit CDs weren’t working on my Compaq computer. A lot has changed in the past decade and a lot WILL change in the next one. It’s hard to believe that I’ve done these predictive posts every year now since 2013.

Last year, one prediction that I totally missed was that I would leave my district administration job after 21 years in schools to take on the role of full-time consulting and speaking. While I didn’t predict that, I can say that so far I’ve loved working with schools and conferences all over the world to collaborate on thoughts and ideas for improving education. When it comes to my predictions over the last 7 years, my success rate has been around 50% which is much better than any baseball player or professional gambler.

That said, these predictions are meant to be taken with a grain of salt. They are meant to challenge both your thinking and mine. Some of them may seem like a future Black Mirror episode while others are just silly, but I’m trying to be BOLD so cut me some slack. So buckle up for 2020!

Social Media gets a mute button

With the 2020 election coming up at the end of the year, you know social media will be rabid with people from both sides of the aisle as well as a LARGE amount of trolls from Russia. While some companies like Facebook have tinkered with a snooze button, I think this is the year that an app comes out that takes all of your social media, text messages, emails, smoke signals, etc. and mutes them all for a period of time. This would be much simpler then having to delete all of your accounts or even mess with notification settings (although those are good skills to teach students).

Last week I caught wind of a tweet by @MrHamiltonPE (which as since been deleted) where they started a “READ and RIDE” program at their school designed to get some motion into their day. Almost immediately twitter tore it apart claiming it had to have been an article from the Onion or at best it was a misinterpretation of “active learners”. Part of the dangers of thinking differently is that you risk ridicule, but I don’t think the concept is completely out of realm of possibility. Personally, part of my daily routine is to now spend an hour on a stationary bike doing research or reading a book. Movement is a good thing when it comes to increasing oxygen levels in the brain and awaking the receptors for learning. So while this strategy might not be the right fit, there is something to adding more movement to the classroom. So why not go 1:1 with exercise bikes?  Remember when we used to spend thousands of dollars on eClickers?

With gamification and Orange Theories popping up everywhere, it might only be a time before a tool like CyclePath becomes widespread.  It connects to games that you play on a mobile device so if you want to run in the game, you have to actually cycle faster.  Not a terrible idea…

Back in 2017, following Lisa Johnson’s inspiration, we began an Ed Tech Poetry Slam (click here to watch the ISTE 2018 version). What started as a fun after-conference event idea has grown substantially since then, mostly due to the amazing educators who are a part of the Ed Poet’s Society. Brett Salakas (@mrsalakas) has taken this idea to Australia and really started to run with it, hosting his own poetry slam events down under. This year, he and I have a couple of tricks up our sleeves, but our hope is that this becomes less a prediction and more of a self-fulfilling prophecy as we try to make Ed Poet’s a global phenomenon. Stay tuned!

The 2020 Election will be heavily influenced by TikTok

As I mentioned in my first post, social media will play a huge role in the 2020 election. This particular prediction may have seemed crazy a few years ago, but when you think about how the last few years have gone with our leaders and their use of social media, is this really out of the realm of possibilities?  I think with TikTok announcing tighter security measures and guidelines last week, they are setting up to potentially be the go to source for where the masses get their information. While the company wants to remain politics free, this is social media…they should know by now that they have no control over that. This year, the election will be televised! (in little 10-15 second cute, loopy videos)

The mogul has taken on space travel with SpaceX and extremely strange concept electronic cybertruck recently. He is known for taking on concepts and ideas that seem to be rooted in traditionalism and then re-imaging them. So why not education? It’s 2020 and we are still hearing terms about how education needs to take a step into the 21st century. Flexible furniture and mobile devices aren’t enough, we need significant changes in mindset and vision. Time for Mr. Musk to take a crack at disrupting education. Let’s just hope it turns out better than his truck windows.

The Ambient Classroom becomes a concept

We’ve heard a lot about artificial intelligence and the use of digital assistants like Google Home and Amazon’s Alexa to help us through our day at home. Despite some security concerns, some schools have even started to implement programs with the consumer listening device in classrooms. This isn’t a new thing as you can find articles from the past couple of years about using inexpensive Echo Dots in the classroom.  “Ambient Intelligence” is the next level in artificial intelligence and I predict (assuming security concerns are addressed), that it could have a HUGE impact in the classroom.  Imagine a classroom environment that adjusts based on the mood, lesson, time of day, activity, etc? It is technology that actually reacts to the users in the room. How’s that for personalized learning?

“WiFi for All” finally happens

In 2013, President Barack Obama announced his ConnectEd initiative with the goal of getting internet access to underserved schools all over the country. While this has only been mildly successful, there are still many without access. With the rapid push towards 5G and the launch of satellite internet in the past year, there should be a point in the near future where students shouldn’t have to go to Starbucks for free WiFi. The LEO (Low Earth Orbit) satellites launched by Amazon and Tesla claim to offer robust internet access to even the most rural communities. Not only that, but with more internet options (like in my neighborhood, where I only have one), that would mean competitive pricing for current internet services. So, while it might not be free yet, I think we are closer to being a completely internet-saturated country, which will be important for all the TikTok videos we’ll be watching this year.

Remember back in the day when schools would spend over $5000 to install an interactive whiteboard to be mounted on the wall? It was one of ed tech’s early attempts at “modernizing” the classroom, but in reality, it only perpetuated the ‘sage on the stage’ approach to learning. Now many districts are shifting to large, mobile interactive displays. While I like that these are becoming more mobile, they are not very cost-effective for the district trying to keep their budget afloat. One of the districts I consult with was trying to come up with an idea for making presenting information more mobile but at a lower price than those large mobile displays. We decided to try a mobile micro-projector. For around $250, they purchased a handful of these Nebula Capsule and almost immediately saw benefits to both teacher and students in having an alternate way to display information. With built-in airplay and an HDMI port, any device can connect and display information on a flat surface. The screen instantly adjusts and bezels based on what it is projecting on. (hint – the lighter the color of the surface the better) It was amazing to see how just having one other projector made the classroom much more dynamic and less “front of the room” focused.

I will publish three VERY different books this year

I’ve been predicting that I will publish a children’s book for the last 3 years and failed on that prediction every year, but this year, I’m raising the bar.

This year I will publish 3 books in three different genres.

This prediction could be more about me blackmailing, but I already have the early ground work laid to make this happen. I’m hopeful I can find a willing publisher out there to take a risk with me, but if not, maybe I’ll take the ultimate risk and self-publish!

There you have it folks. My latest bold predictions for tech and it’s impact on education in 2020. One thing I didn’t list is less of a prediction and more of a hope. As I travel around in my new role, I hope that I get the opportunity to meet and engage in conversation with more fellow educators and colleagues. Despite all the excitement and rapid changes in technology, I still find that having good discussions with thoughtful educators is the biggest thrill for me.

I wish you all an innovative and safe 2020 and hope to see you at an event in your neighborhood this year!