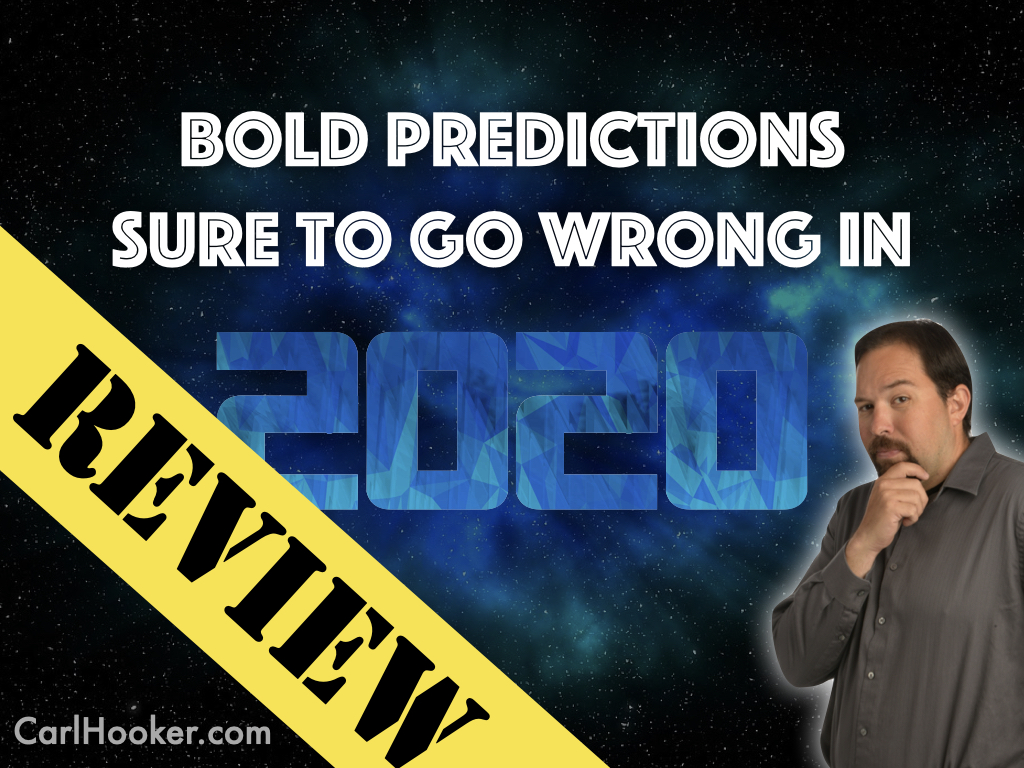 I can honestly say after doing this article for the past 7 years, I never would have predicted 2020 would turn out to be so…dramatic?

Whenever I make these bold predictions, it’s usually a mix of social experimentation and educational prediction. I try to see what the state of the world is at the turn of the year and take my best guesses as to what might happen in the year to come. These are BOLD, but I’ve had a pretty decent hit rate, although some predictions took a few years to hit.

In many ways, the COVID19 pandemic has accelerated education into the future (in some cases, kicking and screaming). We’ve seen a massive shift to online and remote learning and started to question some of our institutional norms that have been a part of education for decades. Needless to say…my bold predictions for 2021 will be REALLY BOLD. But before we get to that, I think it’s always good to review last year’s prediction to see how I did. Here’s a look at my 2020 post for reference.

While the prediction was that some app would come out that would mute all your social media accounts, in some ways, this did come true. Both Twitter and Facebook made some sweeping changes to their platform that included tagging posts as false or unverified information. While this has been met with some criticism from anti-censorship advocates, it has helped raised awareness of digital literacy. Even some of the president’s tweets were labeled as misleading.

To be fair, I’m going to blame the pandemic on this one not coming true. I had some inkling that schools were shifting towards more attention in physical movement in the classroom. And when you throw in the Orange Theory-type competition format, it could be a pretty cool idea during brain breaks in the classroom, especially in bad weather days. No more rainy day recess!

While this never happened, there is a chance that Ed Poet’s co-founder Brett Salakas and I make this happen in a virtual setting. What better year to try it than this year? How poetic that would be…

I didn’t really predict this. I was just seeing if you were paying attention. 🙂

Prediction: The 2020 Election will be heavily influenced by TikTok

Outcome: Trending in the right direction

Social media played a huge role in the election. From conservative-leaning people spinning up their own social media site (Parler) to the flagging of posts as “misleading” mentioned above, social media was a part of everything. It turns out that TikTok did heavily influence the elections in different ways, but the most notable was K-pop fans using the platform to essentially troll the Trump Tulsa rally.

While he has announced that he’s moving to my backyard, Elon hasn’t tried to take on the challenges of education. He could potentially have an impact in education and our students home with his launch of Starlink – an inexpensive satellite broadband internet system. With over 9 million students still without internet access at home, this could be a huge win for low-bandwidth communities and schools.

Outcome: Win on a technicality

So the idea was that schools would use smart lights, speakers and digital assistants like Google Home and Alexa to create a dynamic learning atmosphere. While that didn’t happen, it did happen in many homes across the country as parents struggled to convert their homes into learning pods. We heavily rely on our Alexa’s to not only remind our kids when to log onto their next Zoom call, but also to help them with their homework.

Prediction: “WiFi for All” finally happens

This prediction was really brought to the forefront with the pandemic. The broadband gap was really exposed as schools scrambled to send out hotspots to families or work with their local ISPs to get some internet into homes. There is some hope that this happens (see Elon Musk prediction from above) and with some new direction on the federal level, we might finally see a future where internet is treated like electricity. A given.

While I’m still sure that a multi-screen experience will be built into the classrooms in the future, the truth is all funds were put on hold or diverted to supporting remote learning. It will be interesting to see what happens with the classroom environment moving forward when things return “to normal.”

Prediction: I will publish three VERY different books this year

So while I was well on my way to writing two of the three books, things went on hold once March hit. I still hope to get these out there in the future, but was excited to create my first public online course – The Remote Learning Coach. I’ve done several courses in my previous role as a district administrator, but this course really let me showcase the best strategies and ideas around remote learning. So, no books yet, but a course! That’s sort of a win right?

This year was a doozy when it came to predictions. In reflecting on these, I’m actually quite happy with how close I got considering everything that took place in 2020. If 2021 is anything like this year, my predictions in a few weeks will really have to be bold. Stay tuned!

0 comments on “A Look Back at Bold Predictions from 2020”