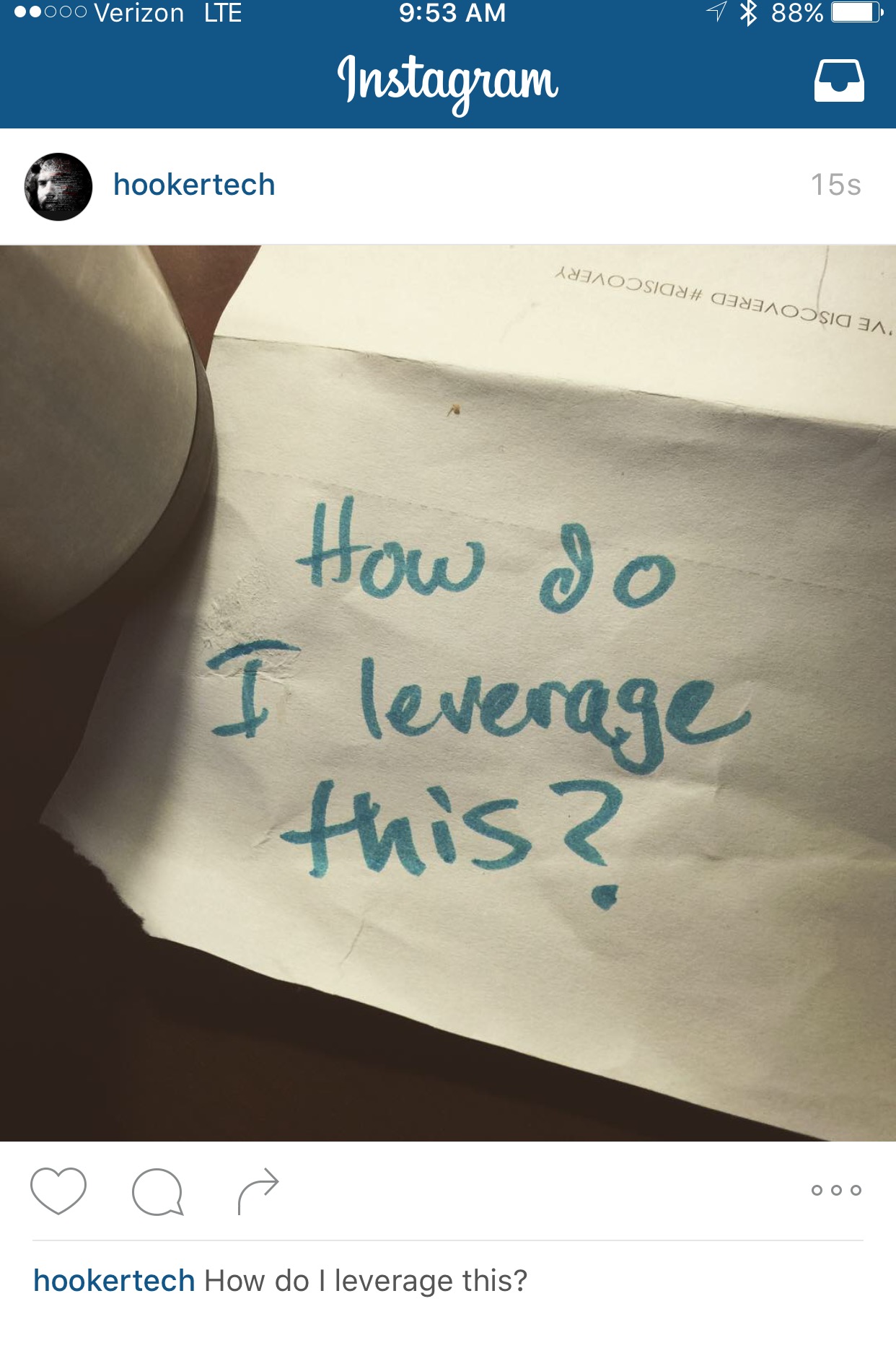 “How are you leveraging the power of social media?”

I hear this question a lot in the educational world but even more in the marketing world.  It always seemed like such a nebulous thing to me.  I mean, let’s look at the first definition of the word POWER: (courtesy dictionary.com)

So in theory, if you are “doing or accomplishing something” with social media you are leveraging the power behind it. Again, a very nebulous explanation to me. I spend many days out of my year speaking to parents and students in our local community about social media.  While most of those talks center unfortunately center on cautionary tales and things to watch out for like this Yik Yak post from last year, I also try and mix in some good things about social media.

I’ve seen first hand the power of connecting with people via Google Hangouts when it comes to solving a problem or working on a project together.  I’ve used Pinterest to help communicate ideas with community parents (and my wife). The past couple of years I’ve utilized Facebook groups to host Weight-Loss challenges with my friends across the country.  These are very useful ways to utilize social media, but I never really viewed them as all that powerful.

At some point in the late summer I really started to “see” what potential power social media has for all of us.  Here are five personal examples of how I’ve experienced first-hand the power of social media. I’ll start with a fairly innocuous example:

While attending iPadpaloozaSouthTx this August, one of the vendors there had a booth set up with a task for those that visited.  Simply take a selfie with their product and use the conference hashtag to post on Instagram or Twitter and they would give you a Starbucks gift card.  While this may seem like a shallow way to leverage social media for caffeine, it does have its perks. (get it?)

During two summer trips I had bad experiences with both Delta and United airlines.  Flight delays happen, but these were extremely frustrating in the sense that neither were due to weather.  In the case of United, I even got to watch my connecting plane sit at the gate while I stared (and recorded) my plea out the window.

I continued to pester both companies on social media.  There was no response from United, but Delta replied right away:

Through a series of DMs that I’ll keep private, Delta reached out and actually granted me a credit for the next time I fly with them. Talk about instant power!

I attempted the same with United, but for some reason their social media account was pretty anti-social so I took to good ol’ fashioned email to get my refund.  What I gained from this is that industries have a social image to maintain and when we take to social media to vent about their service, it could potentially hold more power than an email. It means me and my 9,963 followers (maybe I’ll hit 10K after this) also get to weigh-in and see the experience I am having.  This isn’t a post about “get as many followers as possible” but I do think having the support of a large group helps with leverage when it comes to customer service issues like these.

Fixing errors in the local newspaper:

I follow a lot of local news on Twitter and some of the local news follows me back (which is scary to think I have anything newsworthy to share). The Westlake Picayune (@picayunenews) recently posted an article about our upcoming Digital Learning Symposiums but had a couple of errors.  Rather than call and spend time on hold or leave a voice mail, I took to twitter and got an immediate response and correction.

(Thanks to the Picayune for your help and support!)

I have a wide variety of friends on Facebook that share various political and religious beliefs.  I keep myself fairly private on Facebook except for the requisite picture of the girls or something tasty my wife I get to eat on the rare occasion we go out without kids and have an adult conversation.  However, this summer, I sparked a monumental debate on my Facebook page.  My controversial post would reveal a lot about my friends and family as well as shake the very ground of their core beliefs with this question:

When showing the Star Wars films to your kids for the first time, which film should you start with first? Episode 1 or New Hope?

The amount of advice, links and argument lasted for several days and 40 plus comments. The responses ranged from Adam Bellow’s very to the point response:

Regardless of outcome, I thought this was a great way to get a wide array of opinions from people you trust.  (Editor’s note: We decided to start with New Hope (Episode IV) as it made the Vader reveal [SPOILER ALERT] more powerful)

Getting out of a Traffic Ticket (ok, maybe not):

Having had so many powerful and successful examples of using social media to help me through life, I headed into the school year feeling cocksure and ready to take on the world.

A couple of days before school started, I was utilizing my “pick-up truck” skills to help iVenger Jennifer Flood move from one campus to the other.  With Westalke High School under some major construction this summer, my parking options close to the back door in the 100 degree heat were limited to a handicap spot or a fire lane.  Thinking I would only be 15 minutes, I opted for the fire lane.  When I returned to my truck, I had a souvenir from the Travis County Sheriff’s office waiting on my windshield.

My head was spinning.  This is what I get for helping someone?  Why are sheriffs waiting in the weeds to write tickets to educators?  I immediately took to twitter and Instagram:

I then decided to directly start tagging the @TravisCoSheriff account to see if I could get some response.  What ensued was incredible:

So apparently the power of social media does not mean you can break laws and ultimately, despite my frustration and social media back-and-forth with the sheriff’s office, I did send in my fine (reluctantly) as ultimately I do obey and respect the law.  However, I did rest a little easier knowing that my refund from Delta covered the exact cost of the ticket. 🙂

I know that sharing these personal examples can be very ego-centric, but showing real-world examples from my life versus some I found online I felt packed a bigger punch.  Do you have similar stories? I would love to hear them!  Comment below, tweet me, Instagram me, or write me an old fashioned letter and share your experiences (both positive and negative) with social media.

Until then, please continue to leverage this power for good rather than evil and remember kids….don’t park in fire lanes!

3 comments on “Does Social Media Really Have POWER?”