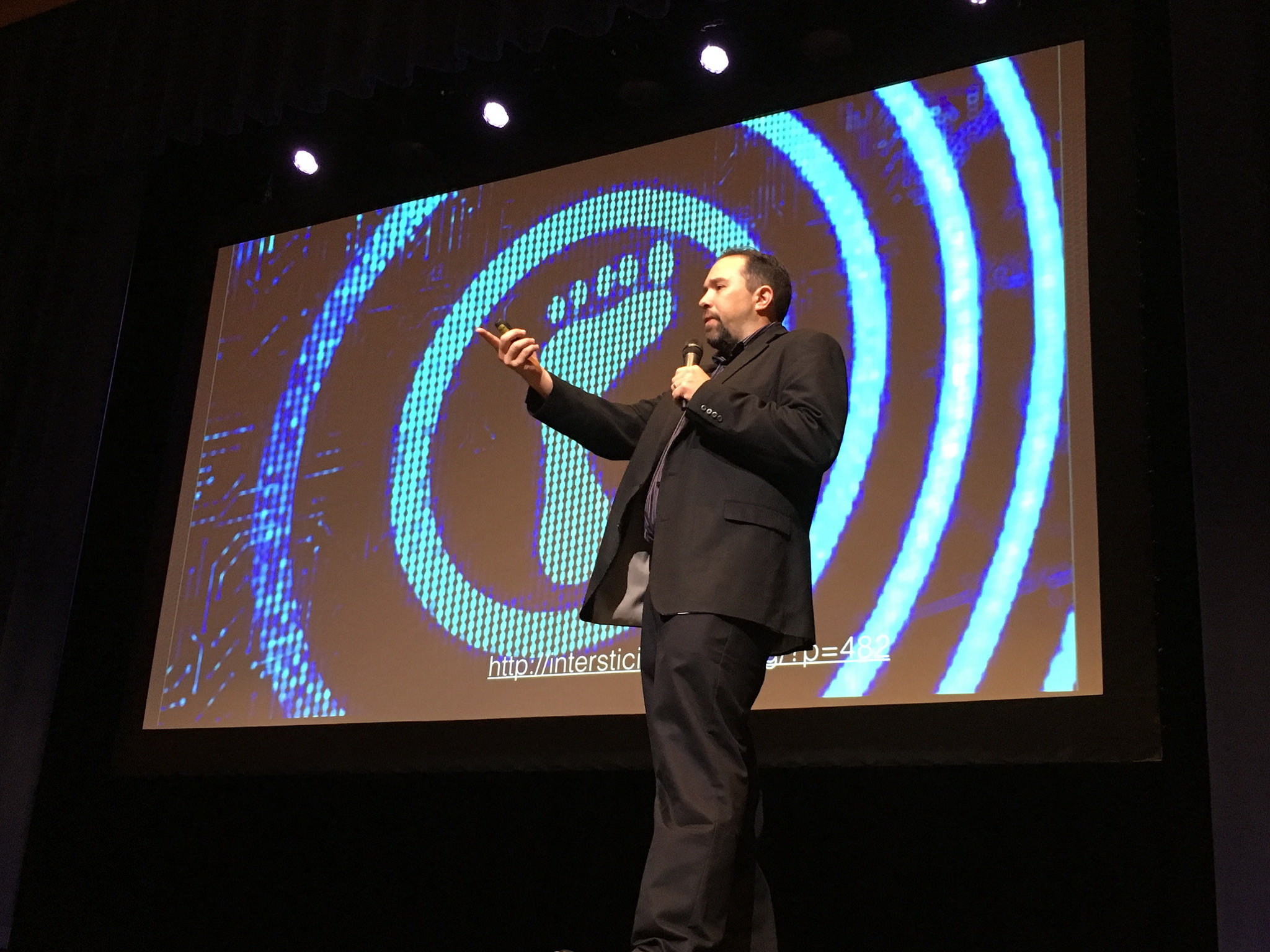 It’s interesting what we think of when the words “Social Media” are mentioned. For parents, our minds drift to a couple of different places mainly; Facebook and bad things with teens.  For kids, it’s actually a very different experience.  Looking at the definitions above (courtesy Merriam-Webster), the technical definition of social media is “Spending time together interacting and communicating(social) through a system which can be spread to a large number of people(media).”

This past month, I had multiple opportunities to host discussions with students of all ages when it comes to social media and technology.  The first opportunity was with my very own Westlake High School students. The second was with the students of Casady School in Oklahoma City, OK (home of EdTech guru Wes Fryer @wfryer. Here’s a link to his post about my visit). I wanted to use these opportunities as a chance to not only have conversations with kids about social media, but also pick their brain about what they think is happening online and better yet, what they think adults think about their use of social media.

Given this dedicated time with students who live and breathe in this world, I wanted to make the most of it.  Here’s a break down of some of the challenges I did with students during our time together.

In teams of 3 or 4, I challenged the students to name as many social media platforms as they could in 2 minutes.  While I knew this would bring about some silly answers, I also knew that the competitiveness would kick in at some point.  Many of the teams had more than 25 different responses, including 32 from one team of middle school students.  I did my best to collect these quickly and have students explain the ones I didn’t get.

Here are a couple of the lists from the Westlake group (excuse my bad handwriting):

Some of the usual suspects were shared by both groups:

Some of the messaging faves:

Some not so usual suspects:

There were some mentions of dating sites as social media:

There were some sites I have never heard of:

And some we warn our kids about:

Then things got interesting.

One of the students stood up and said “Amazon”.  I went to write it down and paused….”You mean, like the place you go to buy stuff?”

Yes. The student began to explain his thinking.  He says that if you recommend something you can actually use that space to interact with customers and companies. Therefore making it “social” in nature.  Looking at our definition of social media stated above, I would say he’s actually on to something here. At that point students began to mention many other platforms and places where they are social online.

This left me somewhat floored.  Not only were these lists growing, but now EVERYTHING could be social media?  It actually reminded me this video that Wes had shared with me a month ago:

(Note: This is satire…not everything on the internet is real)

Using comment sections on any site instantly turn it into a social media site. I don’t know about you, but I want to check out this new “Happy Fast Kitchen” site.

The second activity we participated in was a game I call “Love/Hate” or “Agree/Disagree”.  In this case, I asked students to stand or move to one side of the room if they agreed with the statement.  If they disagreed, I asked them to stay seated or move to the other side of the room.  Here are the questions and some of the results:

Statement 1: Cyberbullying is getting worse.

At Casady school, as it was done in a large performance hall, I used my CatchBox to elicit audience response. It’s always a dangerous thing to give a teenager a microphone in a large crowd, but the kids at Casady were honest and respectful when answering.  Here’s what it looked like: (thanks again to Wes Fryer for capturing this)
https://vine.co/v/ij7tq9BqH0g/embed/simplehttps://platform.vine.co/static/scripts/embed.js

Responses: Many of the students agreed with the statement with the rationale that because there are so many more social media sites out there, there must be more cyberbullying.  Some students mentioned the ease with which you could be anonymous now on many of these platforms, which makes it easier to cyberbully.  Those that disagreed said that they felt their generation is much more aware of the permanence of their actions online and how everything has a trace, even if you think it’s anonymous. According to this report by U.S. News, it’s actually been on a steady decline since 2005.

Statement 2: You can post a photo, then delete it and it will be gone forever.

Apparently students at both campuses have heard this loud and clear.  Not a single student even stood up as a joke.  They know that if it’s online it could be accessed. However, when I relayed my story about my niece Jordan and her first run in with SnapChat, it made some of them squirm in their seats.  I told Jordan that I could hack the SnapChat server (like this guy) and access all the user accounts, including their photos.  Her face began to turn pale as did the faces of many of the kids in the audience when I relayed that story.  So while they believe in this statement, their actions may not necessarily follow suit when it comes to posting “temporary” photos.

Statement 3: Adults don’t understand what teens do on social media.

This one and the next statement had the groups the most divisive.  Those that agreed with the statement mentioned in some cases that parents hear a negative story about an app or a kid on social media and assume that means only terrible things are happening online. Another mentioned that his parents just don’t take the time to ask and understand what an app is and how he is using it.  One student summed it up by saying, “Imagine if their (adults) parents told them to stay off the phone because someone could potentially prank call them. That’s how we feel sometimes when it comes to social media and our parents.”  For those that disagreed, they mentioned that parents are much more tech-savvy these days.  They have smartphones, access to other parents easily (via social media ironically) and can Google search just about anything.

Statement 4: I think my social media use could help me get into college or land my first job.

Another statement that had the groups split right down the middle.  In fact, it was almost corollary with the previous statement in terms of who agreed and who disagreed.  Those that disagreed with the statement claimed that it depends on the type of job, which might make this statement false.  They also said that they had been made so scared to get on social media that they hoped it didn’t hurt them in the future. Many of the students that agreed mentioned how it could help build their online profile and make connections with them that would help in the future. One precocious 12-year old girl shared that “more and more colleges and businesses are looking at your online profile everyday.  That means their is a great opportunity to use that profile to help you land a job or get into college.”

I relayed my own story of how I screen our Ed Tech applicants through social media. While it doesn’t hurt the applicants not to have anything online, it doesn’t help them either.  This CareerBuilder.com press release goes into great detail about how many companies are looking at social media profiles and what they are finding that is either helping or hurting prospective employees.

For the final challenge, I asked the students if they have ever “Googled Themselves”? Most of the students raised their hands.  When I asked some of the students to share what they discovered, there were some amazing and hilarious stories.  One of the students mentioned that his name comes up as a local car dealership for Mini-Coopers.  Another shared that he shares the name (and look) of a famous soccer player. When I asked them how many had googled their teachers, about half the hands were raised (along with some snickers and giggles). About the same amount admitted to Google searching their parents, where one teen mentioned that she discovered that her dad had been part of a pretty famous rock band before her time.

As part of their “homework”, I asked the kids to consider things they could do to improve their online profile and also ways that they could use social media for good.  I also asked those kids that were sitting during the statement about parents “not understanding” about social media that they use this as an opportunity to have a discussion with mom and dad about all the good things they are doing online. (I asked the parents to do the same at a parent talk later in the evening)

I’m sharing all of this because I think schools need to be having these conversations with kids and parents.  We can bring in an Assistant DA to scare kids and parents away from social media, but the reality is, we need to work together on ways to understand these new methods of interacting, communicating and well, being social. That doesn’t happen when you tell kids what they should be doing. It happens when you ask kids what they think they should be doing. I’m hoping that if you’ve read this far, that you will try something similar with the kids in your school or neighborhood.  Please post comments below and share your social media story.

7 comments on “The Truth About Teens – Everything is Social Media”