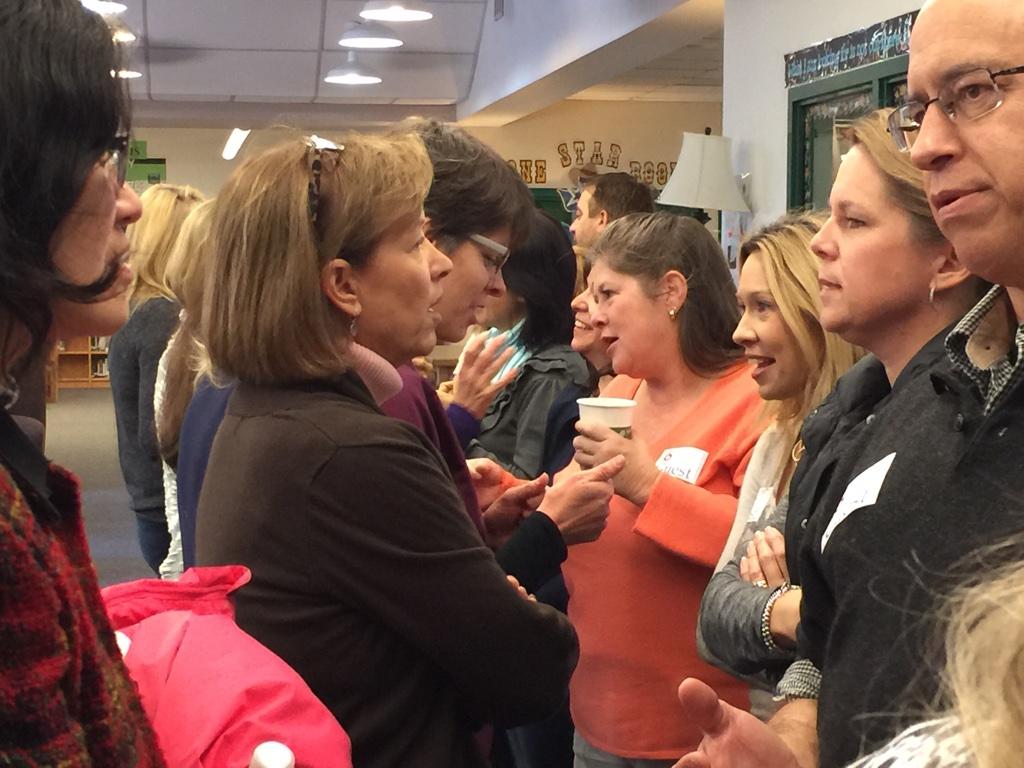 Our focus in education has always (or at least should always) been on the kids.  They are the reasons the school building exists.  However, we’ve blurred the lines in modern education between school and home. Once you start inviting technology into your school (via BYOD) or you start supplying the technology (via 1:1) you instantly put some pressure on parents to not only comply but be on board.

Where most districts fail (and where we failed initially) is that thinking a “parent night” type meeting or newsletter would be enough to notify parents of this disruptive change. I use the word “disruptive” here not as hyperbole, but to really drive home the point that many parents are not ready for the digital world that lies ahead for their teens.  Whether you are doing any type of mobile device initiative or not, there NEEDS to be conversations taking place on your campuses about this from elementary through high school.

I feel like as a district, we’ve improved from the unidirectional communication methods to more of a collaborative conversation with our parents around technology usage and their kids. I’ve written in the past about our Digital Parenting 101 course.  This semester’s 6-week course had over 130 parents involved and one of the best parts of the course is the discussion forums.  As an administrator it’s such a blessing to be able to have insight on the struggles of the community with screen time, gaming addiction and social media troubles.  It helps me stay informed as well as finding resources to help parents in this digital era.

Yesterday, we took the discussion a step further.

With the help of a parent (Jeff Brantley – father of 3 boys and a guru at facilitating discussion) and a couple of my team members (Tim Yenca and Kacy Mitchell), we started our first of many parent-led collaborative workshops.  In the spirit of sharing,  here’s just a few highlights and a fabulous infographic that Kacy designed to summarize the meeting.

As parents walked into the meeting they were presented with some sticker dots.  Around the room, we had posted the top 5 biggest issues for parents (based on the discussions in the iTunesU course and informal discussions with community members).  Those 5 issues were:

We gave every parent 5 stickers and told them they could place as many as they wanted on the posters.  In retrospect I would have only given them 3, which would have forced them to decide on just their top three topics.  Doing this tells the facilitators which topics are the most pressing for the parents.

Following some brief introductions, we asked parents to line-up based on how “Social Media Savvy” they felt they were.  I first saw this done by Tim Lauer at iPadpalooza last summer.  Once the line was successfully flattened (they tend to group in the middle) we folded the line in half so that the least savvy person was paired up with the most savvy person.  Once in partners, they discussed their views on social media both with themselves and their kids.  After a few minutes, we had the pairs group into quads and continue the discussion.  This served a couple of purposes:

1. It forced the parents to be in groups with people other than their friends, thus avoiding the “echo chamber effect.”

2. It opened up discussion amongst each other around ideas and strategies when it comes to social media.

Staying in their teams of 4, the groups then went to one of the 5 topic posters around the room. It worked out that there were 5 teams in the room, but you could have them combine if there are more. Once at their poster they were given three different color post-it notes to relay either strategies, problems, or quotes they hear around their house about these topics.

The discussions within these groups were incredible!  After rotating every 5 minutes and insuring that every group had time in front of a station, we had them come back and regroup for a final activity.

Now that parents had spent time in at a station, we let them choose the one that they were most concerned with and regroup with “like-troubled” parents. The final group’s job was to discuss the problems and report out some final strategies that parents can use to solve the challenges presented.  While we didn’t solve everything we did open up several connections within the community and came away with a wealth of discussion and resources.

Here’s an amazing infographic that Kacy Mitchell captured and created to synthesize the day’s activities:

I’m looking forward to continuing these parent-led collaborative workshops throughout the year and the data that they will yield.  One word of caution is that it may be necessary to frame the day for parents prior to starting. Mentioning the goals of the workshop are to find solutions rather than ranting about issues would be a good thing. It could be easy for one or two parents to turn this from a positive experience to a negative one if they have an axe to grind so going over norms would be good.

0 comments on “Giving Parents a Voice in a 1:1 or BYOD Environment”