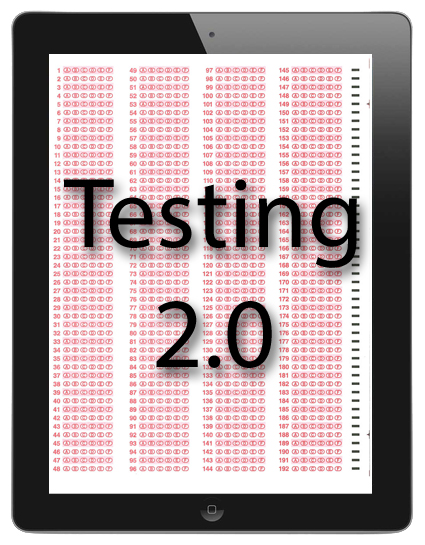 Today marked a hallmark day in the Eanes Independent School District when it comes to high-stakes testing. After some back and forth with the Texas Education Agency (TEA) and the commissioner, last spring we were granted the ability to pilot using iPads as graphing calculators during the state assessment.  Following months of planning and prep, the dreams of using iPads on actual state assessments became a reality today as 600+ students took their 8th Grade Math STAAR assessment.  This decision and process encompassed many hours of careful planning and practice before today’s big test.  As far as I know from colleagues around the country, we were the first district to try this approach. As such, I’m writing this post to not only document our process but also to help others that may try this in the future.

For years (and decades) our students have had the ability to purchase an expensive graphing calculator like the TI-84 plus to help them with higher level math problems and classes.  This calculator retails at around $180 (roughly half the cost of our iPad2s) and is purchased by either the campus or the parents to support their students taking these courses.  With the constant financial pressure and underfunding from our state and the fact that every student has an iPad, we decided to formally request that we be allowed to use the Desmos Test Mode app (FREE) on the 8th Grade Math assessment.  With the successful completion of this pilot, we may even look at other areas (dictionaries?) where we can save money and provide a better experience for our students.

What kind of technical expertise do you need to pull this off?

Our district utilizes a Mobile Device Management (MDM) system known as Casper Suite by JAMF software. Casper includes a feature called “Focus” which allows teachers to lock students into a certain app.  Students are not able to use the camera, take a screen shot or even get out of the app until the teacher releases them from focus. With the assistance of our technology department and Mobile Integration Specialist Tim Yenca, we have been piloting this feature in individual classrooms throughout the fall and spring.  However, on testing day we knew it would mean putting all 600 of the students into one giant class and then locking them down.  Needless to say, there’s a lot that can go wrong technically with that so we decided to test it a couple of times before the actual testing date.

How did we prepare for this?

This plan would have never been possible without the support of our tremendously talented campus Educational Technologists (Ed Techs).  Running two tests simultaneously with a 12-mile gap in between campuses meant that there needed to be a point person on the ground that coordinated everything. Kacy Mitchell at WRMS and Jennifer Flood  at HCMS provided plans, organized teachers, communicated with students and supported the administration during this entire process.  When I asked Kacy how she thought the day went this was her reaction:

“We knew there were going to be issues. There are always issues. Pioneering the concept of locking down district-issued student iPads was pretty scary for most of us at first. My principal even wondered aloud what my heart-rate was about 5 minutes after the bell rang today. In the end, everything turned out just fine. A successful execution of plans A, B and sometimes C was due to careful planning and LOTS of patience from our teachers. “

Jennifer added this insight into the planning process:

“Leading up to today we held two tests of the system in as close to “day of” testing environments as possible.  Having WRMS attempt at the same time gave us more room to experiment with start times and classroom processes than we would have normally had. Between the tests at both campuses, and many conversations walking through all possibilities, our plans reflected every possible outcome that we had some control over.”

I honestly don’t think we could have pulled this off without these two Ed Techs providing daily support on their campuses.  We are lucky to have them here at Eanes ISD.

What about the app?

When the TEA released their revised policy in spring of 2014, they didn’t specify which device or app was required.  Their main concerns were that whatever device used has to be locked down so that students can’t get on the internet or take photos of the test.  The graphing calculator app needed to be a non-CAS (Computer Algebra Systems) calculator and could not contain tutorials or places for storing formulas (which can be a problem with TI calculators).

With the help and advice of resident math guru Cathy Yenca (aka Mathy Cathy), we had been looking into the original Desmos graphing calculator app.  The only problem was the app has CAS capability and stores some examples that students could potentially use.  Cathy and Tim (aka “the Flying Yencas”) were able to work with Eli from Desmos on some feature requests and changes that would be necessary to make the app acceptable for state testing.  Desmos was extremely responsive and open to the changes and after working on some test pilots of the app, released the “Test Mode” version of their app free to the public.  Much like the support of Kacy and Jennifer, this wouldn’t have been possible without the Yencas and Desmos working together to make it happen.

With the support of the team, the administration, the teachers and the technology department, we set forth today to make this plan a reality.  Through all the collaboration and discussion with the team it was determined that we should have both a few regular calculator back-ups on hand and a few iPad back-ups on hand already locked into the app.

As with anything involving technology there are always problems.  Those problems multiply when you try to lock down 600 devices over wireless on two separate campuses at the same time.  Add to the mix a third campus (elementary) and four 5th grade students in advanced math taking this test too, and this process became even more complex.  Thanks to our Ed Tech Margie Brown for helping get those elementary students set up on testing day as well.

Despite our best efforts, a handful of students showed up this morning and decided to update their iPad.  A couple of others forgot to plug their iPad in over the weekend.  The forethought and planning of our Ed Techs and technology department accounted for this and a few spare iPads were on hand in the hallways where the tests we being administrated.  Students that couldn’t didn’t get locked down were given a locked down spare before the test. Students that brought their own iPad were put into Guided Access mode by the teacher prior to the test. Teachers in testing rooms were given a “blue card” that they could slide under their door if they had technical issues during the actual test (thankfully, none of them did).

As you can tell, it takes an entire team of thoughtful and prepared staff to pull this kind of a pilot off.  I knew today was a success when I looked up at noon and noted how quiet the day had been.  That’s a tribute to the hard working people in this district like Kacy, Tim, Jennifer, Margie, our technology department, our testing coordinators, teachers, STEM Director and those outside of the district like Eli from Desmos. Without their collaboration and planning this dream could have quickly turned into a nightmare.

Thank you all for your effort in taking on this monumental challenge!  Now on to the next!

5 comments on “Using an iPad as a Calculator on a State Assessment: Dreams Do Come True”