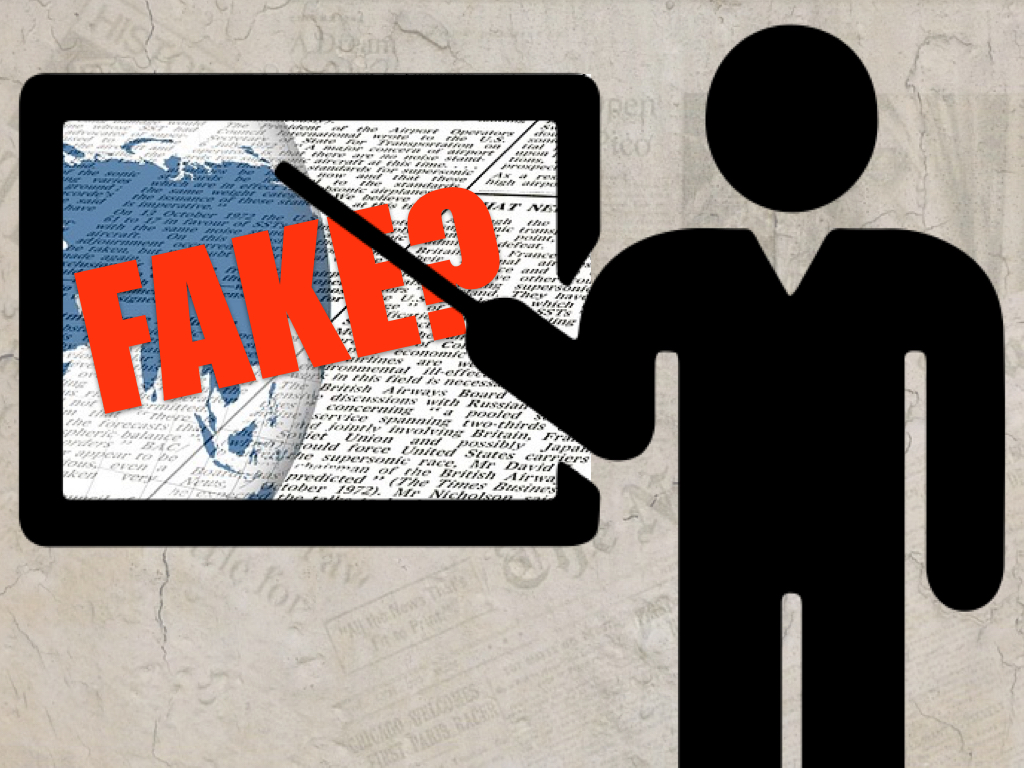 Unless you have been living under a rock, the last several months in the U.S. has meant an onslaught of news stories around our election and the political aftermath that followed a Trump presidency. As someone who works closely with students and teachers, I’ve been traveling to various schools both in and out of my district to talk about a great many things surrounding social media. Lately, many of these talks have turned towards “fake news” and the premise of what is real and what isn’t.

As kids learn and grow up in the 21st century, they quickly realize that information is cheap. Unlike hundreds of years ago, where only the literate could relay information (sometimes with their own spin), now we have everyone, including the leader of our country sending messages directly to the masses in 140-characters or less. While this level of direct communication may seem like a great way to filter out the “fake news” types, it also means that news is not being vetted as it reaches our inbox or Twitter feed. Students (and adults) today now need to take every post, tweet, or website with a grain of salt.  Kids may be able to get information freely and instantly, but it takes work to determine what is real and what isn’t.

In 1938, Orson Welles decided to get behind the microphone of his radio show and realistically re-enact an invasion from aliens in a show he called “The War of the Worlds”. As people believed that anything from the radio was true, hearing this tale of aliens taking over the planet created a state of mass-hysteria. Back then, as the radio was the only means of mass communication, it meant that intermingling news with entertainment happened from time to time. People not privy to this fact were indeed sent into hysterics as they ran outside their homes looking up for the UFOs that would surely be landing at any moment. Making it seem real was what made it so believable.

Thousands of years ago, ancient civilizations told their stories by drawing pictures on walls in the form of hieroglyphics. We are now experiencing a revitalization of that image-driven movement on the web. Memes, animated gifs, and infographics now clog most of our social media feeds as an eye-catching way to get a click. Look on most major websites and you’ll see links to several stories with sensational titles and an image to make us click.  Headlines like “What happened next will shock you” with an image of a man with a shark behind him seem to crowd my “recommended stories” section of most websites I visit. This too, isn’t a new thing with mass media. The National Enquirer in some ways was the original “click bait” before the internet even existed on a wide scale. Grocery store shoppers standing in the check-out isle would see the headline about batboy or the latest from Brad-gelina and be tempted to purchase just to see more details inside.

Most sources have a spin

Between the direct messages we can receive on social media, there are also professionally published news stories that reach our stream one way or another. A couple of months ago this image  went viral as it broke down various news agencies based on range of complex to sensationalist vertically and liberal to conservative viewpoints horizontally. This is a great image to share with students because it shows that while all of these websites, newspapers and broadcast shows are technically “news” they do come with their own biases. Vanessa Otero actually created the original infographic and has a great breakdown of the Reasoning and Methodology Behind the Chart that really is worth the read. She even points out that she created the graphic because we are in a day and age where we don’t read everything and that we are more and more visually driven (see previous point).

So how do we teach kids about all of this?

Teaching kids to think critically about all of this can seem like a monumental task. During my talks with 4th and 5th graders this month, I’ll show them a series of websites and images and ask them to determine if they are fake or real. One of the best recent resources I’ve discovered comes out of a study taken last year from Stanford University. The study (executive summary here), shows a variety of activities shared with high school students to determine whether or not a news story is real or not. One example that I’ve used from the study is the Fukushima nuclear flower picture and post below:

Many students immediately say the picture is fake or photoshopped. When I reveal to them that it is actually a real photograph, most claim that it must be a true photo and probably happened new Fukushima, Japan. However, when I ask them how they know it was near Fukushima, they realize that they poster of the image could have made that up, especially given that the site imgur lets anyone upload and comment on images without vetting the sources.

Having these sort of activities with students can cause them to pause and be skeptical of sources and not just take them at face value. And while sites like Snopes are essential in the critical thinking tool kit, students should still check multiple sources before validating and image or resource. Need help getting the conversation started in your class or school? Check out this 2:10 video on how to quickly fact check fake news sites via Channel 4 FactCheck to help kick off discussion.

As I’ve shared, this isn’t a new phenomenon, but now the variety of channels of mass media and a contentious presidential election has brought this issue to the forefront and it’s time we started having these discussions with our students. Seriously. Let’s get real.

Other resources on this topic:

Connected Teaching and Learning post – How Can You Spot Fake News? via Ann S. Michaelsen @annmic