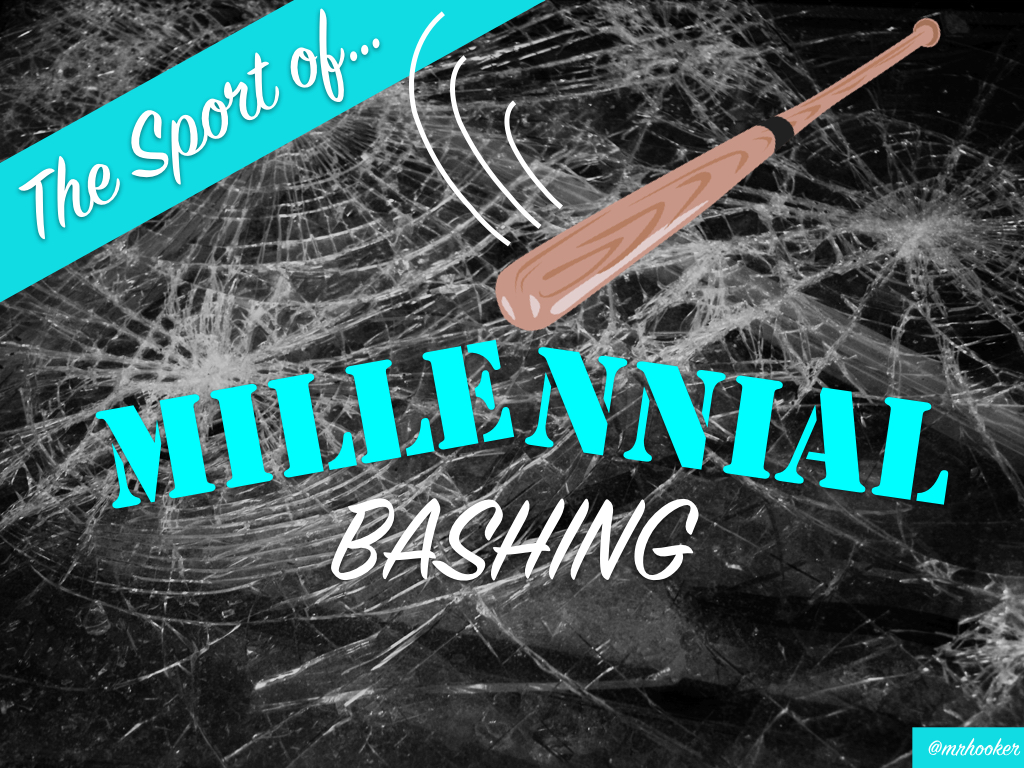 I’m not a Millennial, but I work with them. I’m not a Baby Boomer, but I work with them too. As a member of “Generation X”, I remember living through some of the turmoil that seems to be plaguing our Millennial generation today. We were labeled as unmotivated slackers that would rather spend our time in record shops wearing grunge clothing while having meaningless pop-culture conversations. There are any numbers of movies out there showing our cynicism and slacker-ness from Reality Bites to Empire Records to Singles.

“Why don’t you have ambition?” the older generations would ask. “Do you just want to work at a  coffee shop your whole life?”

Fast forward a couple of decades and now many of my Gen-X counterparts find ourselves in a unique position of being caught in the middle of the two largest generations in our country. And, much like two decades ago, the older generations are at it again (with some Gen-Xers adding to the mix), this time turning their ire toward those under the age of 30.

“You can’t all be CEOs.” we say.  “You think you are entitled to everything. You should go to college, get a job, and own a house like we do. Do that before you change the world.”

Over the last couple of months, I’ve spoken with many different people of retirement age and it’s almost like an itch they can’t help but scratch. “Look at that kid with their face in their phone. These Millennials are so disconnected. Why can’t they just talk to each other!?”

Recently, Simon Sinek (@simonsinek), a man I’ve come to respect and who’s work I’ve studied and even quoted in my books, released his own video slamming Millennials in the workplace and in life. Sinek paints a bleak picture of the kids today and the jobs they are heading into. He makes them out to be helpless kids that are addicted to their phones. He even claims that phones should be treated like addictive drugs and alcohol because they release dopamine. You know what else releases dopamine Simon?

Should we get rid of those too?

I’ve been guilty lately of feeling like an old fogey when I start saying “these kids today…” and then I stop and think. What’s the point of what follows that statement? Is it to make me feel smarter and more superior than the generation that follows me? Is it to make them feel inferior or deficient? What is the point?

Here are just a few common quotes I hear from older generations quite a bit regarding Millennials.

“This generation is way too ambitious”

In Sinek’s video he blames the parents for their blind ambition. I don’t know if that’s necessarily true, but if you juxtapose the differences between Gen-X as “slackers” and Millennials as “wild, entitled dreamers” it’s almost like every generation has to be one extreme of this argument. If they have ambition and hope to aspire to be CEO of their own company one day, they are considered un-realistic for not “putting in the time.”  The whole idea of “getting a job at the coffee shop” was considered a negative towards my generation (as we lacked ambition) and amazingly now turned into a suggestion for the current generation (which has too much ambition).  You can’t win Millennials.

“This group is so self-centered and selfish”

This criticism is largely a perception around the way Millennials use social media and as Cathy Hunt (@art_cathyhunt) calls it, “selfie-shaming.”  Older generations see tons of kids taking pictures of themselves and quickly assume it is self-centeredness. While I can’t dismiss what that looks like on the surface level, I will say that I’ve come to know more and more kids from this generation that are extremely generous with their time and energy. They are being raised in a globally-connected world unlike the previous generations and they are seeing that they have to do something about to keep us all from self-destructing under melted ice caps.

I love how we want younger generations to go through and learn the things that we were taught, almost like a right of passage (or sufferance). But let me ask you a question: When was the last time you balanced a checkbook? When was the last time you wrote in cursive? Was it when you signed the checkbook? There’s any number of these types of remarks when it comes to the current state of education.  The truth is, they should be learning how to balance a budget and save for their future, since the previous generations will soak up anything left from that old savings account known as “social security.” (remember, you were warned about sweeping generalizations)

“But if they can’t do cursive how will they read historical documents? Plus, I hear it helps with their brain development.”

Why isolate historical documents written in English here? Because it fits YOUR narrative. There are also historical documents written in Hebrew, but I don’t see older generations bemoaning that they should learn Hebrew. The second part of this statement is dripping with some truth. I do agree that there are positive connections between brain development and physical fine-motor movement, but why stop at cursive? I love the sketch-noting movement for this very reason. I’m sure somewhere in 39 A.D. there was a Gen-A person complaining about how the “millennials” at that time weren’t learning sanskrit and calligraphy any more.

“They are on their phones way too much”

When I was a kid growing up in the 80’s, I heard this EXACT same argument for when my sister would spend hours on the phone talking to her boyfriend. In actually though, it wasn’t talking. It was more like listening to each other breathe. Back then, you were limited by a cord that confined you to a room, now you can move anywhere and actually exercise, shop, and many other things while talking (i.e. texting) on the phone. Our phones are also alarm clocks, flashlights, radios, computers, cameras, and many other things. If you combine all the time you are on all those other devices, it would probably equate to the amount of time they are on their phone.  At least now they are moving, right?

“…but it makes them anti-social”

Yes, we do need to teach kids AND adults about appropriate times to have face to face conversation and when to be on your phone.

I’ve seen this photo on the right making the rounds on social media the past couple of years showing that antisocial behavior is not new. It’s been happening for decades, except now the news is on our phones not on a giant piece of highly flammable carbon. That said, I do not think this is an accurate side-by-side comparison as newspapers don’t make beeping or vibrating sounds or notify you to look at them. As with anything in life, balance is the key.

“They just need to learn how to boil an egg and hammer a nail.”

Do you remember Home Ec? I remember learning how to sew a pillow and how to make a wooden race car for boy scouts. I enjoyed the hands-on aspect of this, but have no earthly clue how to do that again. At least, not without the help of YouTube. I once heard Brian Smith (@1to1Brian) speak and he said the greatest teachers in the United States are Google and YouTube. While there’s something to be said about the experience of trying, do we really need to spend an entire year learning how to boil an egg? Is that really preparing our kids for their future? If we are going to complain about them not doing enough hands on things in school, we should push for more robotics programs as that’s where their future lies.

I could go on and on, but you get the point. I think it’s time for the sport of Millennial-bashing to stop. It’s just not productive.

Rather than bash them, take a moment to be empathic and see the world they are inheriting from their point of view.

The next time you catch yourself saying, “these kids today….” stop and actually think.  Rather than criticizing how they don’t do things that emulate your childhood, think about all the great things they will do to help you in your senior years.

Because like it or not, they are going to be the ones to take care of us in the decades to come.