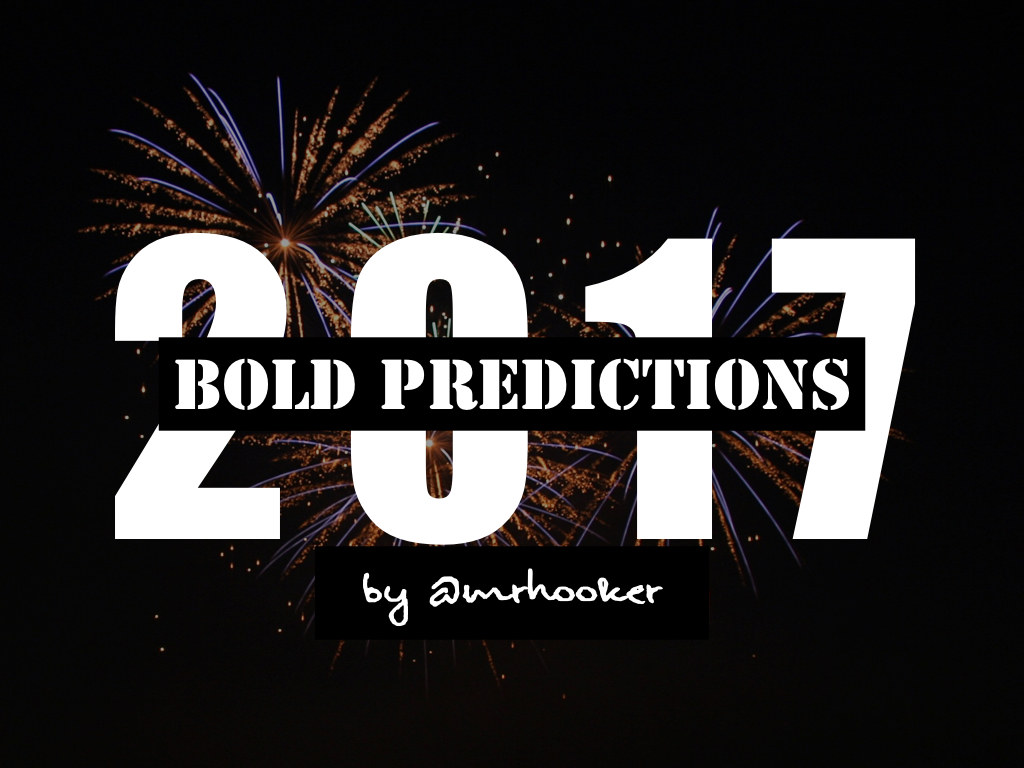 Every year I embark on an expedition to either look brilliant or embarrass myself. (Let’s be honest, that’s more like every day in my life) Since 2013 I’ve set out to make a series of predictions, mostly in the Ed Tech world, that are bold. Now, let’s look at the definition of “bold” below before we get started.

While all of these certainly can be applied, I’m going to focus on the final definition and say that some of these predictions stretch the usual limits of conventional thought or action. Last year for example, I predicted that schools would start to implement self-driving buses.  As crazy as this may sound, about a month after the prediction, a company in Perth, Australia, began to pilot the self-driving bus in their community.  It’s only a matter of time before schools use them right?

You get the idea. Some of these are crazy, others actually just make sense, and some I just wish would happen.  So, with that in mind and stressing that this is a “no judgement” zone, let’s proceed:

The immersive dual-language movement has been going on for decades. Why not treat coding as a foreign language? If we really believe that we are preparing kids for a global society, then why not teach them a language many of them will find useful later in life? This does not mean that learning an actual foreign language is any less important, it’s just that we should probably start to value coding and programming on that same level in schools. One sign that this would become a reality would be if a school district actually gave a language credit to those learning to program and code. Talk about taking “hour of code” to the next level!

I’m not even touching the political side of this, but instead, let’s focus on the medium to which our future president will use to communicate the State of the Union with the masses. I get the feeling that Twitter will not be enough for him in the future. I mean, either they’ll have to change their limit of 140 characters (not likely) or he’ll choose a different way of communicating. Enter SnapChat! What a great way to make a bold statement and then have it disappear (sort of) just a few seconds later. Does this sound all that crazy considering where we are today with social media, politics and the recent election?

Every year, iPadpalooza tries to center our attention around a certain theme. Last year we let the “Learning be with us” via a Star Wars-focused theme centered around looking into the future. This year, we take the PokemonGo phenomenon and flip it on its head with our “Learning on the GO” theme. I mean, what good is it to have all of these mobile devices in schools when kids are forced to sit in desks in rows learning the same traditional content the same traditional way? During this year’s event, there will be a whole lotta shakin’ going on with sessions centered around the theme and even a new type of session called a “Walk n’ Talk” where attendees will actually walk around the campus with a presenter sharing an idea. You’ll want to have a good pair of walking shoes before you join us this summer!

Someone will invent a PokemonGO type app for education

Speaking of PokemonGO, it’s only a matter of time before someone invents an app that has some of the same addictive…er…engaging pieces of the widely popular Niantic app. I know there already is a PokemonEdu Facebook group and Twitter hashtag centered around using the characters from the app in an edu setting, but I’m talking something bigger here.

Imagine it.  As a teacher, you have access to a platform that allows you to upload little learning nuggets into a platform.  Students then actually get up and physically leave the classroom to discover these learning nuggets. Working in teams, they put the nuggets together and get certain badges for completing certain challenges. There could even be time limits, based on the class schedule, so you don’t just have kids wandering the halls all day. It’s like taking the APPmazing Race to a whole other level….hmmmmm….

I’m always reading stuff about “Big Data” and hearing about some fancy things happening with the IBM Watson project, but in truth, I find data to be extremely boring in its traditional, spreadsheet-focused format. I equate it to going and getting a physical. You don’t want to do it, but you need to if you really want to improve your health. Let’s face it, unless you are an accountant or testing coordinator, you’d rather find something else to do with your time rather than pouring over hundreds of color-coded graphs.

But this year, I think that will change. Now, I’m cheating a little bit here as I’ve been privy to a new program (called CatchOn) that actually puts usage data in a simple, clean, fantasy-football-like format. Gone are the days of me logging into different programs to look up usage statistics and figure out the ROI of a particular program. In this not-so-distant future, we’ll actually be able to see everything that’s being used on a district or school level right on our phone and then adjust accordingly. As someone who delivers professional learning in my district, being able to see this data instantly and beautifully would be powerful in steering what we need to help train teachers on or what we need to get rid of. Now that would be sexy (and save us money)!

For the past couple of years, there have been several one-off ideas of using some sort of mixed reality in the classroom. Maybe it’s virtual through programs like Google Expeditions or Nearpod VR, or maybe it’s augmented like using the Aurasma app to see hidden things (something I attempted to do with my book series). Either way, mixing realities can provide a powerful way to engage students into certain content areas and up until now, it’s largely been seen as a niche or fun side activity. As witnessed by this recent Kickstarter called the ZapBox, it’s not too hard to see a future where the holograms actually do pop up on the desk so you can interact with them. Now, if only they can invent a way to create virtual versions of those paper footballs that I used to flick across the classroom.

Piggy backing on the VR concept and expanding into pop culture, I see hollywood grabbing onto the VR the concept and expanding it to the viewer. Now, as someone attending a VR-enhanced movie, you put on the VR goggles, much like you do now with 3D glasses, and are instantly in the middle of the movie. You look around at all the characters around you and actually sit in the middle of the room where the action is taking place. Imagine sitting in a car from Fast and Furious 15 as it launches out of a plane and lands on a boat! Or imagine sitting in the living room during Halloween Part 13 and instead of yelling at the screen for the actor to turn around, you can actually turn around as the killer approaches? Doing it in a movie theater gives everyone the same shared experience and you could even make movies more “Choose your own adventure-like” where half the audience goes down one hallway and the rest go down the other. Sound crazy or genius? I’m not sure where I fall on this yet, but hope it happens.

The Classroom becomes “Smart” with Frank

With devices like Google Home and Amazon’s Alexa really taking off in the consumer market, it doesn’t seem that far-fetched that we would soon see an educational version of these tools. I think it should be called something like “Frank”. Frank would be like a fact-checking teacher’s assistant that all the students could also use. “Frank, when was the battle of 1812?” or “What is Bohr’s law?” or maybe “What is my teacher’s favorite treat?”  All of these could be useful in saving time in the classroom and help dive into even deeper learning and higher Bloom’s level thinking. However, I imagine it might also come with a lot of new classroom management issues.  But hey, for every challenge comes an opportunity, right Frank?

I finally publish my first children’s book…and this time I mean it!

Yes, I know this was on last year’s predictions, but I sort of had that whole Mobile Learning Mindset book series to finish first. With that series finally complete, I’m ready to embark on a new journey. I’ve got a lot of good ideas for a tech-centered children’s book that will definitely be some sort of mixed reality book too. It might even come with it’s own pair of VR goggles attached on the back. Like a virtual pop-up book of sorts. Now, if only I can find a publisher willing to take a risk….

There you have it.  A few bold and bolder predictions that may happen this year. What do you think? What do you predict? Add your comments below and maybe together, we can make the future a better place for learning too!

2 comments on “Bold Predictions Sure to Go Wrong in 2017”