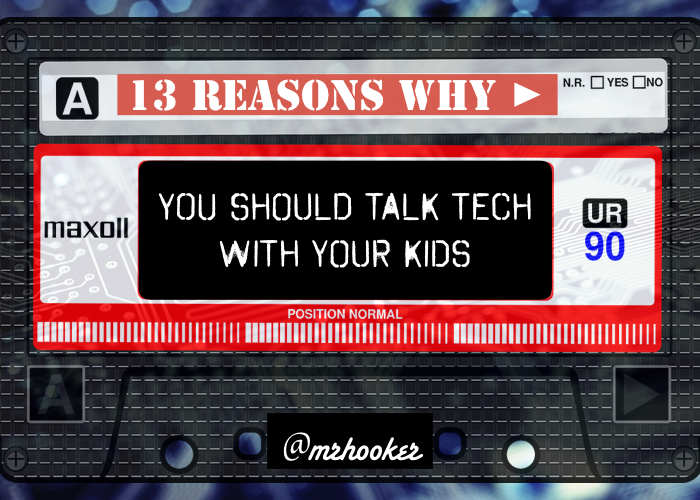 The Netflix phenomenon “13 Reasons Why” based on the Jay Asher novel of the same name has captivated the teens of the nation. There are countries banning it and others applauding it because of its awareness (and graphic nature) of teen suicide, sexual assault and “slut shaming.” The National Association of School Psychologists (NASP) even released a white paper about the show.  I asked my Facebook friends what their thoughts were on the series. The responses ranged from this:

The reality is each child is different and this is ultimately an entertainment series, albeit a dark one. The fervor around this show does highlight a larger issue when it comes to modern media and our kids….we parents don’t understand it and as a result, don’t want to talk to them about it.

Here are my 13 reasons why you should “talk tech” with your kids:

Kids are getting smart phones earlier and earlier in life. Whether you give your kid a phone in 1st grade or 8th grade, there needs to be some level of discussion around the responsibility of such a device. One mom I spoke with recently gave her daughter a responsibility test by giving her an old iPhone with wireless access only. She explained that she expected it to be plugged charged every night and to know where it is at all times. If she was able to do this for 6 months, then she earned the responsibility to own a working phone. Within 2 weeks, her daughter had lost it. We need to remember the financial and social responsibility around these devices and have a discussion BEFORE we hand them the power of the world at their fingertips.

2. Give them room to grow

When we give our child a bicycle, we put training wheels on them so they won’t fall until they learn their balance. The same should be true with technology BUT we also don’t want to keep the training wheels on too long. If you do, the second they turn 18 and leave your house, the training wheels come off and they fall down for the first time without your support. Another analogy a student shared is “social media is like water, you can either teach us to swim or we will drown.” If your teen is interested in social media, don’t just let them run wild with multiple accounts, but also don’t shut them out completely as they’ll never learn how to swim in that world.

So now your kid has a device and a social media account almost immediately they get into some mischief. It might be a good time to talk about the 24-hour rule. The Federal Aviation Administration (FAA) instituted a “24-hour rule” when it came to an air traffic controller making a mistake. If they make a mistake (that didn’t result in a fatality) they have 24 hours to admit and report the mistake without any punishment. The thinking being that the FAA can learn from the mistakes if they are reported. Instituting a similar rule with kids could come in handy when it comes to reporting wrong-doings and learning from them. The alternative would be NOT reporting something they did wrong for fear of punishment which doesn’t give them the opportunity to discuss and learn from the mistake. In the show 13 Reasons Why, many of the kids have drama in their life that they don’t feel like they can discuss with their parents.

Creating some household rules with input from your entire family is important for them to take on ownership. You might have to massage in some common sense rules covertly, but if your kids have input in the rules and punishments, they’ll be more likely to follow them.

5. Rules are a two-way street

Don’t forget that household rules apply to everyone in the household if they are to truly have meaning. If you have a rule of “no technology” at the table, that should apply to mom and dad too. I used to struggle with this for years and had an awakening moment when my daughters told me that they thought I’d rather pay attention to my phone than them.

When my niece started her SnapChat account in 2015, I wasn’t sure what it was and how it worked. (I could argue that’s still the case)  However, I asked her to show me the features and the ideology behind it. I then used that moment of me as learner and her as teacher to flip the script.  This was an opportunity to share my wisdom and life experience with her while she shared her social media experience with me. Never pass up the opportunity to have these discussions with kids. Letting them teach you something also opens up their receptors to your words of wisdom.

You’d be surprised what kids have to say when I ask them, “If you wanted me to tell your parents something about social media, what would you want me to tell them?” The response is generally the same, “They share too much.” Parents can be equally guilty of oversharing too much information online as kids. Have a discussion with your kids about when, what and why you should share images, posts, and links on your social media accounts. You might be surprised with what they have to say.

When the SnapChat phenomenon launched, there was a tremendous amount of excitement around the idea that photos would magically disappear within seconds. Of course this was immediately proven false by the ability to take screen shots on phones. One thing I shared with my niece was the fact that photos don’t magically travel from phone to phone(see images below). They go from phone to internet to server to internet and then back down to phone. Along that path an image is captured and retained on that server. Always a good reminder that nothing shared digitally is truly temporary. In the show, one of the many reasons for the young girl’s suicide revolves around the fact that there is an inappropriate image of her making the rounds.

In his TED talk, Dr. Russell Foster mentions that teenagers need 9-hours of sleep at a minimum but many get less than 6. Part of what affects that sleep is the circadian rhythms that are upset by bright lights and screens. A child that doesn’t get enough sleep is prone to frustration, anxiety and ultimately, depression. Making a house rule of “no devices in the bedroom” can help with this as there is less temptation to check in with friends and have late night texting conversations between friends.

10. Ask about their interests

The show highlights the fact that parents are generally too busy to chat with their kids except for a few drive-by conversations at dinner or breakfast. Keeping involved in your child’s interests on more than a passing basis will help build a stronger relationship and also alert you when there is a change or sudden lack of interest in a hobby or sport that they previously were gangbusters about.

Recent research about teens (especially girls) shows that some are affected emotionally by the attention (or lack there of) of their posts. If they dont’ get enough “likes” or “hearts” or “favorites” on their social media posts, then you must not be important. I’ve spoken with some teens who mention that they’ll pull a photo off Instagram if it doesn’t get enough likes right away. There is a lot of social pressure already in the world today, adding a layer of social media pressure can cause teens to do or post things they shouldn’t which could add even more drama to their lives. A lack of self-worth can lead to depression, so it’s an important conversation to have with your kids when they enter this world.

In my interview with Devorah Heitner (author of the book Screenwise), she mentions a story about an 11-year old girl being completely distraught because of her friend’s lack of response to a text message. In today’s age of instant-gratification, we all tend to lack patience when waiting for someone to respond. In the case of the 11-year old, she started to send multiple messages asking for a response, each message adding stress to her life that her friend wasn’t happy with her. After a couple of hours and a complete melt-down, she gets a response – “My parents don’t let me text during dinner.” One thing I liked about the show was that it really highlighted the lack of empathy for the main character. It’s something that becomes even more important in today’s fast-paced world.

There is a lot of research out there about the balance of our connected lives with our non-connected lives. Professor David Levy at University of Washington actually has a course on “Mindful Tech” where he teaches his students how to mediate, reflect and just “be”. There are some tremendous mental health benefits associated with movement, the outdoors, and sitting and reflecting on a day gone by. When my youngest was 6 months old, I remember vividly feeding her a bottle and checking Twitter on my phone at the same time. I was missing one of the most important things in my life and it was right in front of me just to stay connected.  While it’s important to talk with kids about meaningful use of technology, we also need to help them train their brain to be still and enjoy the “now”.

Discussing these 13 reasons may or may not help your child cope with a social-media, tech-crazed world. But I can tell you one thing for sure, you never know until you try.