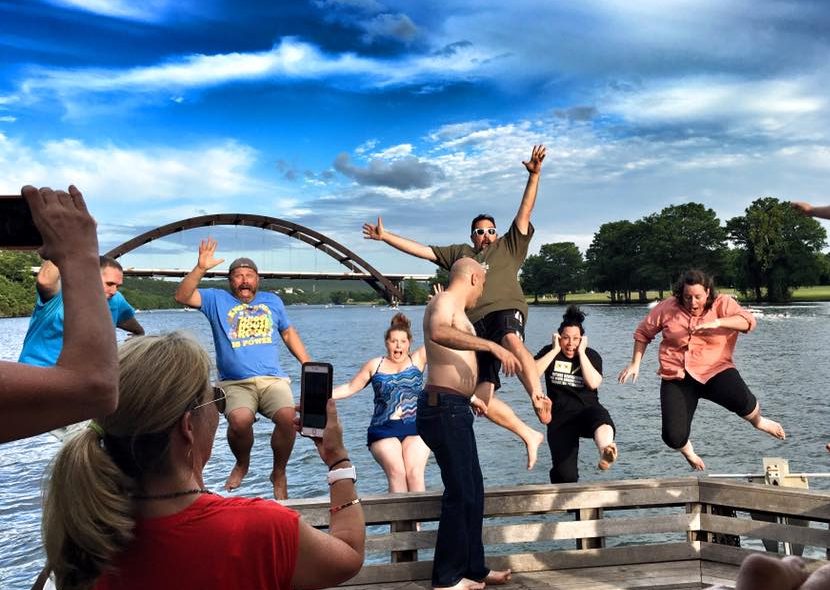 During his mini-keynote, Derrick Brown (@DAB427) claimed that we were all “just living in a Hooker’s dream.”  While I’m honored by his statement, I can tell you this entire experience has far exceeded any dream I could have dreamt. I can also tell you that this dream wasn’t just mine, but a shared dream amongst teams of dedicated educators that I’ve had the pleasure of working with because of this event.

This past week at the ending of our 6th annual learning festival, I announced that it would be the last iPadpalooza main event. This decision was not made in haste and has involved countless of hours of discussion, counseling, and, in my case, even some tears. But, before we dive into what comes next, I decided to write this post as part explanation, part reflection, part appreciation, part therapy (for me), and part teaser (for what’s next).

In 2011, we had launched our iPad 1:1 and wanted to hold an event that would bring teachers together to share and learn from each other. Since other districts in the area were doing it, we decided we could open it up to outside educators as well. The thought of holding an “iConference” was kicked around but sounded boring and overdone. One of my amazing iVengers (Marianna Ricketson) said at a meeting in early 2012 that we should name it iPadpalooza as a way of making it sound more fun. So we bought the domain and set a date without any clue as to what we were going to actually do. (Hey, sometimes, you just have to take a risk and put it out there)

Also at that point, I added the tagline that “It’s not a conference…it’s a learning festival” to make attendees aware of what they were attending would not be a normal educational conference. So, on June 19, 2012, we partnered with TCEA to host our single-day event and even had some film students create this promotional video (below). As a fun side note, I had to reach out and chat with Norman Greenbaum to get his permission to use his song in the video. He’s a groovy dude.

The truth behind the lie

Following a successful first year, we wanted to make the next year even bigger and expand it to two days. So I hopped on the phone with Sir Ken Robinson’s people to try and convince him that he needed to come to our learning festival. When he said he’d never heard of it, I lied. I told him that it’s a global event that is attended by 1000 educators from all over the country and the world. He and his people agreed to do the keynote, and even though in the first year we only had 400 attendees, when he showed up, so did 1000 people from all over the country and the world. So….it wasn’t necessarily a lie, it just wasn’t true…yet.

Getting educators to attend professional learning during their off-time can be extremely tricky. While ideally, people would just come to improve their craft, there is also some pressure on those providing the learning to make sure it’s worth their time. When I was a classroom teacher, I always thought the best trainings I attended gave me some choice and allowed time to collaborate and be hands-on with activities rather than sitting in a room for several hours being talked at. When I attended conferences, I took notes of the parts I liked, and the ones I didn’t. Cramming sessions in with 5 minute breaks left no time for reflection and collaborating. Also, as I attended events like TEDx, SXSW, and even ACLFest (a music festival), the idea to create a festival atmosphere kept creeping into my head and those on my team.

The learning festival ideology is centered around the concept that learning can be fun (even for adults) and that learning should be an event…an experience if you will. From the moment you walk in until the moment you leave, you should be a part of the experience. Taking the traditional conference concept and shaking it up with live music, food trucks, t-shirts, contests, film festivals, and unique session types helps make the learning more festival-like.

It’s more than just a name

We knew when we named the event “iPadpalooza” that the name immediately excluded certain groups of educators (those without iPads). While we began the event as a way for teachers to share iPad resources, education, devices and technology integration has evolved. Indeed, our session titles in the early days were also centered around the device rather than learning. Sessions like “50 apps in 50 minutes” were popular when we began, but as the festival evolved, we noticed a stronger push to focus deeper on learning strategies with and without technology.  Whatever our next iteration will be, we want to make sure that all adults (and students) have an opportunity to experience the Learning Festival-feel regardless of what device their district may have purchased.

6 years – by the numbers

Here’s a look at a few numbers of iPadpalooza over the the last 6 years:

Before Sir Ken, Tony Vincent took a chance and decided to open up our inaugural event in 2012. (I was actually the closer for that event). Without Tony, our event wouldn’t have had the initial credibility to get off the ground. I’m forever grateful to him and the work he brings to education. Other featured keynotes included Sugata Mitra, Guy Kawasaki, Adam Bellow, “iPad Magician” Simon Pierro, Cathy Hunt, Eric Whitacre, Kevin Honeycutt , Austin Kleon and Jason Silva.  Also, in 2014, just to be a little different (and to make @techchef4u happy), we had the band Blue October close out our event.

Besides the above, we’ve hosted nearly a hundred “celebrities” from the education world, many of whom have been roped into doing a mini-keynote over the years. Here’s just a few names that have generously given us some of their educational expertise over the years:  Tom Murray, Christian Long, David Jakes, George Couros, Kerry Gallagher, Dan Ryder, Amy Burvall, Dean Shareski (and his daughter this year!), Audrey O’Clair, Wes Fryer & Shelly Fryer, Felix & Judy Jacomino, Adam Phyall, Amy Mayer, Greg Kulowiec, Andrew Wallace, Cathy Yenca & Tim Yenca,  Lisa Johnson, Greg Garner, Don Goble, Kyle Pace, Phil Hintz, Kyle Pierce, Leo Brehm, Chris Parker, Michelle Cordy, Jennie Magiera, Scott Meech, Tracy Clark, Cori Coburn, Rafranz Davis, Kathy Schrock, Monica Burns, Derrick Brown, Todd Nesloney, Jon Samuelson, Matt Gomez, Reshan Richards, Julie Willcott, Richard Wells, Rabbi Michael Cohen, Brianna Hodges, Carolyn Foote, Brett Salakas, Jona Nalder, Matt Miller, Holly Moore,  Joan Gore, Janet Corder, Kacy Mitchell, Steve Dembo, Lucas Loughmiller, and Chris Coleman just to name a few. (Apologies if I left anyone off this list!) So much talent has graced the halls of Westlake High School over the years and I can honestly say you would be lucky to have any of the above as keynote speakers at your event. There were also countless other rock-star teachers that have been a part of the 509 presenters that have shared their wisdom at our events.  Check out the last couple of mini-keynotathons and other featured speakers on the iPadpalooza YouTube channel .

Events around the event

One of the things that really makes our festival different is the thought, time, and energy put into events happening during and around the main event. The APPMazing Race and Youth Film Festival both kicked off in 2013. In 2014 we added the iLead Academy and in 2015 the Prepalooza Learnshops. This final year, we also added our first ever Ed Tech Poetry Slam at the Spider House in Austin (Shout-out to Lisa Johnson for the idea!)  These events around the event really make it a nearly 24/7 experience in learning, connection, fun, and collaboration.

Other ‘paloozas and the Learning Festival Network

In 2014 I was approached by Kari Gerhart and Caroline Little about the possibility of bringing iPadpalooza to Minnesota. And thus, the iPadpalooza spin-off events were born. A little bonus history here, it was around this time that someone, either Caroline or possibly Reshan Richards coined the term “Godfather” for me – owing to my Sicilian background.

All told there have been over a dozen spin-off events with Minnesota, East Texas, and South Texas being the longest running. In 2016, we went international and became the first iPadpalooza in Australia.  While the main event is over, we still support our spin-off events and hope many more will pop up over the years.

Speaking of spin-offs, there were several events created that were “inspired by” the spirit of iPadpalooza. Events like iEngage-Berwyn, Miami Device and others took pieces and parts of iPadpalooza to spice up their own event. In the coming years, we hope to fold these and other spin-off events, into our Learning Festival Network to support them in any way we can.

In 2014, I decided that instead of doing the traditional sponsor thank you speech at the beginning and end of the event, that I would turn it into a rap song. I also tried to set the Guinness World Record of “most synchronized light show” in history by turning off the lights and controlling everyone’s iPads with Nearpod as I sang my version of LMFAO’s “Party Rock”.  While it worked, Guinness sadly failed to show to recognize the achievement.

The following year, I tried my hand at a parody of Eminem with “iPadpalooza Yourself” (sang to “Lose Yourself”) but realized that this was becoming a one-trick pony and I needed to push myself.

If you haven’t figured it out yet, a lot of my inspiration comes from talking and collaborating with others.

Enter Felix and Judy Jacomino.  With their input, we starting working on a different way to thank the sponsors….via a “Slow Jam”. Experience it below –

This year I attempted to follow it up with my version of Car pool karaoke, which was fun…but the slow jam will always be my favorite.  And their ending of this year’s event with the “Ed Tech Musical Review” will go down in history as an epically funny way to look at trends in Ed Tech.

These events can’t happen without dedicated staff willing to do the dirty work from running around fixing projectors to handling prima dona keynote speakers. I’ve been blessed with an amazing team here at Eanes ISD. They work their tail off year after year for this event and always with a smile on their face. Without my amazing team of Ed Techs, a.k.a. iVengers, none of this would be even remotely possible. The ideas for this event come from the collective brain power of this group, not just me. I’m excited to have them on board for what comes next….

While iPadpalooza sails off into the sunset, I can promise you there will be something else coming. We are already cooking up ideas for a prototype event next summer with our internal staff that will keep some of the same features of iPadpalooza but also open up some other thoughts and ideas. But why stop at just one event? There are also plans for a SUPER SECRET idea (my BHAG – Big Hairy Audacious Goal) that I can promise you will be a one-of-a-kind experience.

Thank you all for being on board this voyage for learning over the past six years.

Here’s to the next dream!

10 comments on “The Dream That Was….iPadpalooza”