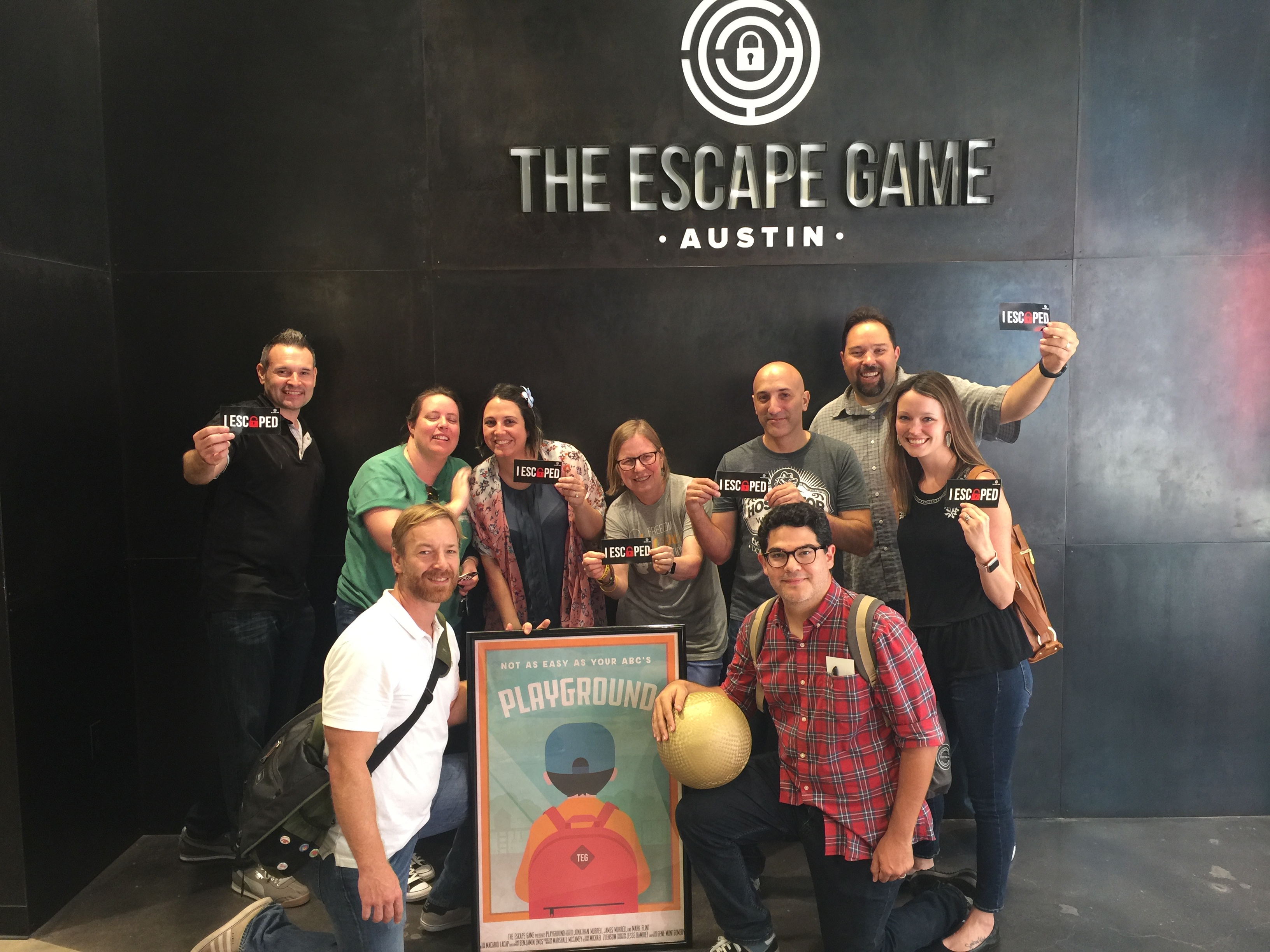 I’ve been in education for almost 20 years and some of the campuses I’ve worked for have made attempts to do a “retreat” as a way of team-building and goal-setting. When it comes to retreats run by public education, we are a bit limited in scope. As we are funded by tax payers, we can’t take our employees on a boat cruise to Hawaii or a weekend in Vegas. Private companies have been hosting get-away retreats for years as a way of celebrating past successes and setting goals and benchmarks for the future. In general, the anatomy of a retreat is made up of the following items:

While I am , I have never attempted to host a retreat.  Sure, we’ve gathered at my house for happy hour or gone out to lunch together, but generally, these are social gatherings (which are necessary from time to time).  We’ve also done quite a bit of revamping of our meeting structure to make it more retreat-like (more on that later), but still not technically a retreat. With the pressure mounting on what would be our first ever retreat, I felt that we needed a mixture of the following:

Adding those elements into the previous anatomy of a retreat, I had a mission. And since I do my best thinking with others, I brought in a couple of team members, Tim Yenca (@mryenca) and Jennifer Flood (@floodedu) to help build some of the structures of the retreat.

Finding places to meet around Austin isn’t a problem.  Finding FREE places to meet that also cultivate creativity is an issue. So rather than just meeting at a local coffee shop, I contacted Joshua Baer (@joshuabaer), head honcho at Capital Factory – the epicenter of entrepreneurs and start-up companies in the city.  Josh was kind enough to set us up in the “Willie Room” on the 16th floor of Capital Factory (located in the Omni downtown).  What I love about this space is not only the breathtaking views, but also the openness of the space and proximity to other start-up companies working in the same space. that we have access to for free.  With our base location set-up, it was time to build the agenda.

During the retreat, we working on getting to know each other better. The first thing I sent the group was a pre-survey that asked them a few basic questions.  Some of these were for future activities, but for the retreat specifically, I asked the team to identify the following:

Using this information, I printed out cards that read “FEAR” or “PLACE TO VISIT” with their answers on the back. We used this to play a pictionary-meets-charades version of the Guess Who? game. Splitting the group into two teams, each team member took turns either acting or drawing out the answer on the back of the card. The team had 1-minute to guess the answer and if they got it right, they got bonus points for identifying the correct Ed Tech who said the particular item.  While there were a lot of cherished moments during this activity, one of my faves was rookie Ed Tech Chris Hanson (@tejashanson) doing a flip to demonstrate the app FlipGrid in charade form.

This game could have gone on for a couple of hours, but after a few rounds and my “Who’s line is it anyway?” type scoring, we ended in a tie and then went through the remaining cards to guess who said what. This activity was a great way to start out the retreat and it really highlighted the unique-ness of each of us, including our strengths and weaknesses and ways in which we can support each other. Finding out that Ed Tech Debbie Smith (@dsmitheisd) had a fear of small spaces made it particularly interesting for an upcoming challenge where we all crammed into an elevator together.

This team is composed of visionary thinkers and ideators with a wide variety of expertise. While it’s important that we create and share some common team goals, I wanted to use some time during the retreat for the team to reflect on individual goals as well. I set up this next portion to help the team answer the following questions:

We then gathered in teams (elementary and secondary) to discuss our individual goals and using district goals to guide the creation of one or two team goals for us this year. I think that third question above is one that I often struggle with. I love creating goals and ideas, but going back and checking on their success (or failure) is often a missed step.  I’m hoping these goals guide each of us individually and as a team, and that at next year’s retreat, we can check in and see how successful we were in accomplishing them.

Another benefit of hosting the meeting in Capital Factory (besides the free food and beverages) was the VIP tour that we got of the complex for one of our breaks. One stop on the tour was the Virtual Reality Room. We each got to participate in a wide variety of games and simulations. I was immediately blown away with how far these VR simulations have come in recent years. In talking with the resident VR resident (who went by the name “Justin”), it was clear to see the educational impact a VR environment could provide to students and their learning experiences. One thing that was even more compelling was the idea that students could create and program their own worlds, which is certainly an area we want to investigate bringing into our schools in the future.

I’ve been experimenting on ideas to get our team to cross-collaborate more often. One of the benefits to having campus-based Ed Techs is that we are able to have a lot of just-in-time learning opportunities for staff on campuses. However, this does create more silos when it comes to the team sharing and collaborating on ideas. To battle this isolationism, I’m testing out something new that I call the “Ed Tech ShareCase“.  The concept is that one Ed Tech is the campus Lead and two other Ed Techs collaborate with them as assistants so to speak.  They collaborate on a project or professional learning experience for the campus and then go there to help deliver it.  My initial goal is for the team to do this a couple of times throughout the year in an effort to build cross-collaboration. Then, during our monthly meetings, Ed Techs will not share their own work, but instead the work of others that they are supporting.

Going on an Adventure!

With some goal-setting and team-building under our belts, and a much needed lunch break, we set out for our next challenge. Using the EventZee app that we’ve used at past iPadpalooza events for photo-hunts, I created a city-wide scavenger hunt for the team to complete. My goal for this part of the retreat was not just getting everyone up and moving around our fabulous city, but also getting breaking up the teams into groups that don’t get to collaborate often. A couple of days before this challenge, I actually walked the course myself as I wanted the hunt to end in a specific final location. (see below). I perched myself on top of a tall parking garage structure to see the teams walking towards various clues throughout the city and sent them occasional alerts when their time was running out. I love the scavenger hunt concept for the competitiveness and collaborative problem-solving aspects. Plus the walking makes for a great “after lunch” activity.

The final stop during our retreat was the Escape Game Austin. Having never been a part of an escape room experience I didn’t know what to expect, but this ending event really brought our team together and as a great way to wrap up the retreat. The rooms/games you can choose from vary in size (4 to 12 people) are complex and really encourage collaboration, communication and problem-solving. The particular room we chose was called “Playground” and actually involved several elements from a school (ironically enough). Once I heard about escape rooms, I’ve always wanted to do one with this team.  I brag to anyone that listens to me about how clever and collaborative our team is and how we would escape without an issue despite the 11%-15% success rate of most teams.
I’m happy to share we escaped with 10+ minutes to spare!

The retreat was a major success in accomplishing the goals we set forth at the beginning. While there were a couple of activities we didn’t have time to accomplish, it did a great job of getting us all on the same page and also gave us much fodder to harass each other for the rest of the year.  If you are planning a retreat, think about the experience and what you hope your team to gain out of it. And what ever you do, don’t just make it a meeting only longer. Otherwise, you may have your team trying to escape!