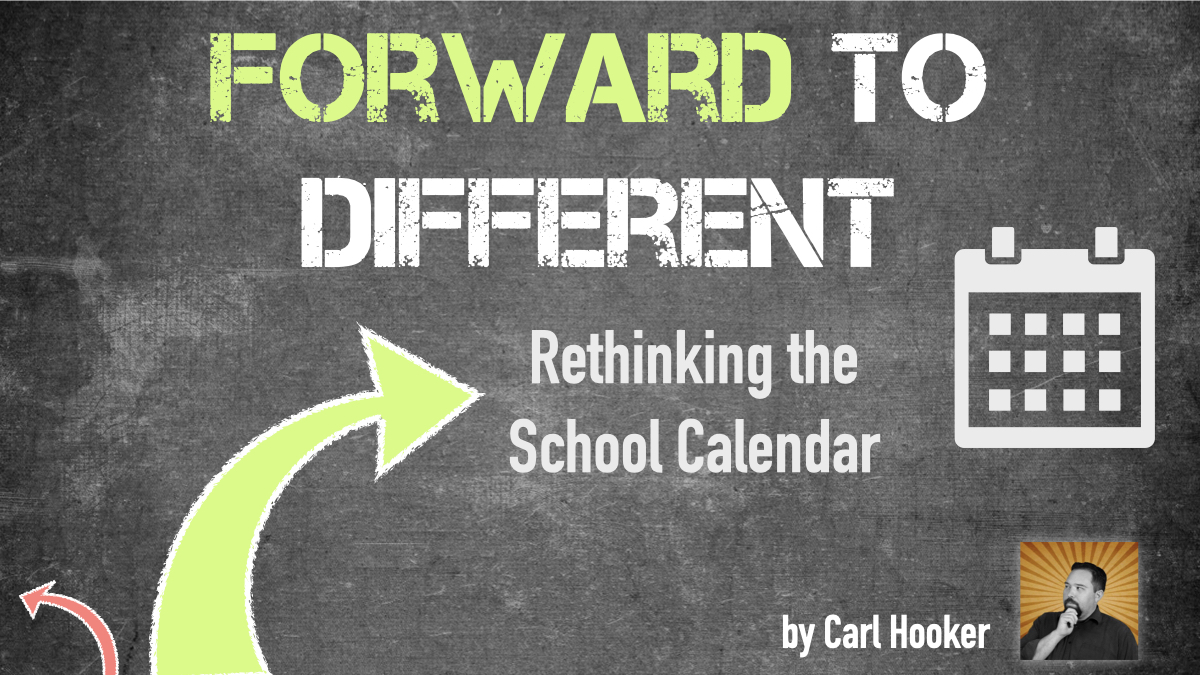 Editor’s Note: This the first in a series of blog posts reimagining how schools should move going forward. Taking to account the current state of K-12 schools, the increase in teachers and leaders leaving the field, and the tools we have available to us. Check out the overview post here.

There is a long-standing belief that the school calendar was built around the agrarian calendar. Summers are off for kids in farming when in actuality, they would be most needed in the spring (for planting) and in the fall (for harvesting). Like many urban legends, this myth has become somewhat of a talking point narrative as to why a majority of U.S. schools have summer off.

The truth is, our current “traditional” school calendar was set up as a compromise between rural and urban areas. Prior to the invention of air conditioning, keeping kids cooped up in sweltering buildings didn’t make much sense. So, it was agreed at the end of the 19th century that students take time off in the hot months of summer. The belief was that this would allow for kids to do other enriching activities (thus summer camps were born) and teachers could do some professional development.

With this traditional calendar come some other side-effects that are still deep rooted in education today. One side effect is a deadline, based on birth date, to determine which kids are locked into certain grade levels. These grade levels then build basic assessments of knowledge and skills based on an average. Assessments take a pre-determined marker as the average and then say that the average student should be above that preset line.

Entire economies are built around summers off with travel and family vacation. Mom and dad could plan to take a couple of weeks off from work to travel to see Marty Moose. Sure, many students experience the “summer slide”, but this has been the way of doing business in schools for over a century. But it doesn’t have to be. Below are all the different ways we could do school if we move forward to different.

Let’s start with the one we know. 180 days of instruction. 12 weeks off in the summer. Students distributed based on age into grade levels and the year is split up into semesters, quarters, or trimesters. This has been the tried and true model since the late 1880’s. Some of the pros of the traditional calendar include a concentrated time frame for professional development. Another is the financial savings of not operating air conditioning of a school building during the hottest months. And of course, teachers do need time off to recharge their batteries, especially after these past couple of years.

The downside of the traditional calendar can be seen in schools today. At-risk students tend to suffer a bigger “slide” during the summer. Those that need the most academic support often don’t have access to it. Those with a higher socio-economic status can provide tutoring and/or enrichment camps. The gap between the haves and have-nots continues to widen in this model.

Professional development is also a challenge. Teachers are often bribed with extra pay (much deserved) or days off (also much deserved) to attend training in the summer. With those days held so sacred, much of the required training (like blood-born pathogens) occupies a teacher’s calendar. When actual professional learning takes place, it can’t be implemented right away because of the long break.

In this model, the days are split into either 60/20 (days on/off) or 45/15. Some models still have 180 days, but most countries add in a few more days as the United States has one of the shortest academic calendars in the world.

In this model, there isn’t a long summer break but instead several breaks spread out through the year. Students are still grouped based on age in the traditional Year-Round model and the year is usually split into quarters or trimesters in an 11-month system.

Just a quick visual check of the models above shows the differences when you spread the academic time throughout the year. Cons of this model generally come from those that don’t want to lose their summer or from schools trying to save money in the summer by closing down buildings and saving on electricity. Sports camps (especially football) also feel the squeeze when summer isn’t 60+ days long. Parents would need child care options, but that is also an issue in the summer. If all schools had a similar schedule, pop-up camps and other enrichment type businesses could emerge for those parents that need a place to physically house their children during the work day.

The are many pros to this model, including a smaller summer gap for students to fall behind. With more frequent gaps, teachers and students get time to recharge their batteries and reduce stress levels. Professional learning can be ongoing and throughout the year. Vacations now have more options for travel, including “off-peak” times that don’t include summer.

Students struggling academically don’t have to wait an entire year before summer school arrives to help them recover. There can be opportunities provided by teaching staff during breaks (for an additional stipend) to help support those students that need it. Teachers can assess their students’ needs and spend quality time adjusting lessons as needed, rather than doing it during lengthy after school or weekend times.

More breaks throughout the year could also help teachers when it comes to the daily errands of life. Getting oil changes, doctors appointments, tire replacements, vet visits, etc. get kicked to the summer or take days off in the traditional model. School might lose some savings from having their buildings operating during more summer months, but they also have more breaks to update and fix parts of the school.

This model would be the first step into a different direction. Some private schools, charters and even a few public institutions are using this model now in the U.S. It would take federal and state guidance to make this model the norm and breaking us out of the 1800’s. That said, if we switch to year round calendars, other options, like those below, become more possible.

There will likely always be a marker to denote where a student is on the academic spectrum. But that marker should be based on their learning growth, not their age. The traditional school calendar keeps the age-based grade level system locked in place. It takes a lot to advance a student or retain a student an entire year, often affecting the student socially and emotionally in the process.

In a year round scenario, students could jump up to a different level in between breaks rather than wait for the summer break. Would this be disruptive to some classroom environments with already established norms? Yes. But if enough students earned the move up, a new section could be formed and another dissolved to balance costs.

Staggering and mixing students based on ability can increase diversity and differentiation of learning. In a true multi-track model, certain cohorts of students would be off while other students remain “on”. This means you could have more students enrolled in a school than the traditional capacity as well.

The challenges of this model, besides logistics and traditionalism, are that they school year is constantly resetting every break. All the other traditional benefits of the current calendar are also affected like state-testing, athletics, graduation events, parent conferences, etc. Teachers and support staff would have to be adept and flexible when it comes to instruction, making a traditional “lecture-based” model more difficult. Grading systems would need to pivot to a more standards-based approach as well since learning is rated based on mastery of a topic rather than getting a good grade on a homework assignment or quiz.

This type of model certainly moves a lot of cheese, but it also could be the most beneficial to student learning and true personalization. A project-based school would have much better success attempting a model like this than a traditional school system. Now, if we really wanted to move to something different, this last model could be it.

Educators shudder at the word “hybrid” these days as they harken back to the beginning of the pandemic when they had to teach kids online and in-person simultaneously. That is not the version of hybrid I’m referring to here.

In a year-round hybrid model, school would exist in two simultaneous models. Students would follow a multi-track year round in-person schedule supplemented at times with an online experience. Teachers wouldn’t be teaching these online components in real-time. The classes would be project or challenge-based and students would be able to determine their own pathway during off-time.

Vacations could still happen. Students can log in as often as they want or until they mastered their objective. This new version of homework would be less about practice and more about deeper understanding. Worksheets replaced with world-building and connecting.

Students could attend classes outside of their geographic area (hint – future blog post coming on this). During their in-person “off time” they could learn another language, master math objectives, or design an app for their future business. This calendar looks the most messy of all as the online component would happen during various quarters or trimesters potentially. Here’s a look at what that might entail for a student.

In the above model, a student attends year round in-person school, potentially jumping up levels in various subject areas between breaks. Meanwhile, they are working on additional online learning either in an area they are passionate about or in an area where they need extra support.

As with in-person school, there would need to be some built in breaks for online learning. These “Off line” times could coincide with in-person breaks so that students could achieve true “down time”. An online advisor/mentor would help them through this part of their school day and help them connect with the right resources and instructors as needed.

Time is a limited resource

No matter what calendar or ideology a school chooses, balancing academic time and down time is a challenge. There is no, one-size-fits-all scenario in education, but creating calendars and possibly online components that allow for flexibility is a step towards true personalized learning. There are many permutations of the methods I’ve suggested above that exist, but for reasons of traditionalism, they never take hold and achieve wide-spread adoption. It’s going to take leadership at the state or federal level to truly make that happen.

Please share your own thoughts in the comments below. What am I missing? What more could we do as we head Forward to Different?