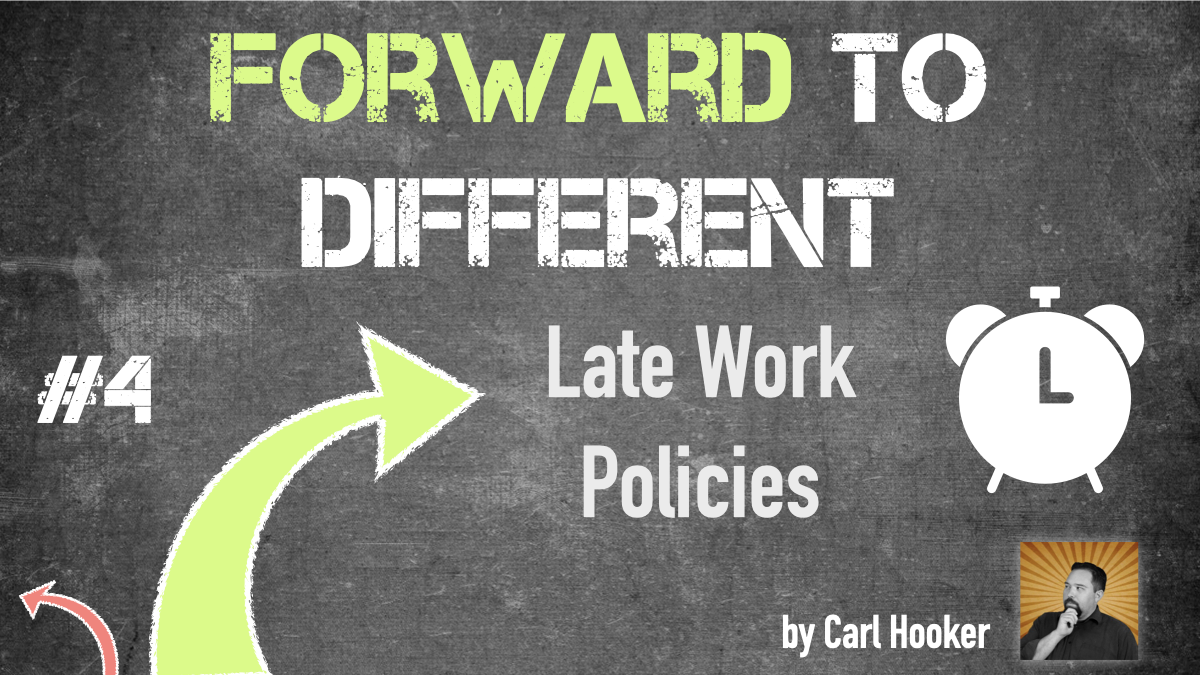 This past week, we received a message from our child’s teacher that we needed to sign the 4th Grade Grading/Behavior policy form. As we looked through the contract we noticed the following section about late work:

This raised all sorts of questions in our minds as parents and the practicality of using an academic measure (like grades) to penalize a behavioral issue (turning work in late). Before we go any further, I want to say that my daughter’s teacher is extremely supportive of the students in her class and will give them many reminders to turn in late work. This policy is a DISTRICT policy, not her belief.

I decided to post this question on Twitter to see what the teaching universe would have to say and well…it kicked up quite the hornet’s nest. As of this post, it has 185 comments and counting. (check out the full thread here, but be warned…)

As the comments and suggestions grew in the thread, battle lines were being drawn. It became clear to me that this is another institutional norm in education that we might want to re-consider when going “Forward to Different“, thus this post. What follows are summaries of the main arguments both FOR and AGAINST doing this followed by some options for helping students with their executive functioning/time management skills without punishing their grades.

The arguments FOR deducting a grade for late work

It teaches them responsibility and self-discipline. At some points the students need to learn the consequences of their actions and what better way to do this than hitting them where it hurts the most; their grade. Are their other ways we can “grade” behavior, sure, but those don’t affect the kid as much as seeing their “A” go to a “B” because they were a day late on the assignment.

There are deadlines and consequences in the real world. When you are late turning in work, your boss gets mad and sends you an angry email. Do it enough times, and you could get demoted or even fired. If you don’t turn in your taxes on time, you pay a penalty. If you don’t pay your bills on time, you could be without electricity. The real world has deadlines with often harsh penalties. Using grades teaches this to kids while their frontal lobes are developing.

Not doing this teaches kids it’s ok to be a slacker. If you don’t have any penalties or consequences for late work, students can turn stuff in all the way through graduation (and even after). All this teaches them is they can blow past deadlines with no repercussions, which isn’t true in life. It encourages procrastination in students.

It makes the work more important. Without penalties for missed deadlines, it means the work isn’t that important. Not having these deductions lessens the importance of the work itself. If the student never turns in the work, then how can teachers access them on the skill? Students with great study habits can become lazy when they realize doing the work on time isn’t really that important.

Teachers have a lot of work to grade and need a deadline. This mostly applies to secondary teachers who can often have up to 180 students a day pass through their classroom door. Having hard and fast deadlines makes grading all those papers much more manageable. Allowing kids to turn in work whenever they please makes the process much more cumbersome and hard to manage on the teacher-grading side of things.

The arguments AGAINST deducting grades for late work

Grades should be used to show mastery of learning. This was by far the most mentioned response to my tweet. In a “perfect world”, we are using grades to measure the growth and mastery of student learning. Adding in “timeliness” to the equation skews that measure.

As a parent, if I see my daughter is getting a failing grade in math, I might hire a math tutor to help her. However, what if she is actually fine with math but can’t turn anything in on time. I got the tutor for the grade but in actually I should get her a tutor to teach her time management skills.

Responsibility and executive functioning should be graded separately than academic growth. Utilize a separate “graded” section that covers soft skills so we can also measure growth on that front. Having two separate “measured” sections of the report card give much more information to the student and parent in terms of what areas need improvement. Maybe you are doing high quality work in Language Arts and deserve the “A” but you turn in every paper late (which authors do all the time – btw) which results in you getting a “C” in time management. That is more effective than blending the two together.

This doesn’t address the behavior. In fact, in some instances, it might increase it and negatively affect their self-esteem. Students that habitually turn in late work may give up because their grades are tanking. Address the behavior and come up with strategies to help fix it rather than just docking their grade across the board.

Schools should exist for learning, NOT just for preparing kids for employment or higher ed. In theory, schools shouldn’t exist just so we can make sure kids get good grades in college or that they turn in their work to their bosses on time. Using lack of time management to punish grades shifts the focus from academic growth to “playing the game of school.” This opens up a whole other discussion about grading, but I’ll save that for a future post.

The system rewards organization over knowledge and understanding. This creates a mis-interpretation of mastery. It rewards students who finish their home work on time, which assumes that they must have a better understanding of the academic concept. However, if you are disorganized, yet understand the concept well, it doesn’t matter in the grade book.

Punishing kids for late work via grades can cause lasting damage/anxiety to a student. In the thread, several adults shared stories about the anxiety this caused them during school and later in life. While some say “kids just need to suck it up and get the work done on time” that’s really a one-size-fits-all approach that doesn’t differentiate for students. Damaging self-esteem and raising unnecessary anxiety shouldn’t be the goal or outcome when it comes to learning (or late work).

This policy isn’t equitable or inclusive. It fails to take into account students’ home life, their own learning preferences, commute time, access to technology and parental support. Perhaps a student has to work extra hours at home to make ends meet or there is not where they can go to sit and focus. This assumes that all students have a great, supportive home life, when in reality, many of our underserved communities do not.

Instead of punishing for late work, give bonus points for turning work in early or on time. If it’s a big project and you get it done early, perhaps a little point bump is in order. This is a fine line as you don’t want students rushing through their work, but it shifts the focus from a negative (punishment) to a positive (reward). One issue with this option is it still means the grade doesn’t accurately reflect their learning.

Use this as an opportunity to teach them how to dialogue and communicate. When you are late with a bill or rent, do you just not pay it? No, you reach out to the company to ask for an extension or explain your situation. Life happens and it’s happening to these kids at home as well. Encourage them to have open communication when it appears they are going to miss their deadline. Many teachers on the thread mentioned they would often forgive some late work if the student talked to them about it first.

Teach the students to reflect on their own time management. When a student does turn in an assignment late, this is an opportunity to talk with them about time management. Have them reflect (written, video, audio recording) about why they turned the work in late and what they could do better next time. Sometimes, it might be extenuating circumstances, but usually it was just them getting distracting with something else that commanded their attention. Reflecting on the issue helps them notice their own behavior more so than just docking points off a grade.

Allot time during the week for students to finish up late work. In elementary school there is often a “Fun Friday” where students have time to work on passion projects or play games that teach intrapersonal skills. Taking this concrete experience away from a student in elementary can have more of an impact than a grade which is more abstract. One commenter mentioned her 3rd grade son missed his Fun Friday once and never turned in a late assignment again. However, now that he’s in 8th grade, which has a points penalty policy, he just gives up and doesn’t care about getting his work done.

In secondary schools, many students have a “home room” or “advisory” period to complete missing work and ask for support. Providing this additional time might be the thing a struggling student needs to focus on mastery of the skill rather than just rushing to turn something in on time.

Have a “late slip” for work not turned in on time. When a student misses a deadline, give them a late slip. The late slip has to be taken home and signed/acknowledged to encourage discussion around why the work was late. At that point, work must be turned in with the signed late slip, but no points are removed for academic mastery.

It’s clear to me that this is a hot-button issue in education with no “perfect solution.” I truly understand both sides of the argument here. After reading the (now) 192 responses on this thread I can tell people have severe emotional attachment to penalizing or not penalizing students for late work. To me, it really comes down to this question: What is best for kids and how can we teach them to be their best selves as adults?

Can we teach them time management and executive functioning skills without penalizing grades? YES.

Will it take more work, time and energy by the teacher and parent? YES. At least at the beginning as we front-load students with the skills to manage their time best.

We have to remember that sometimes, what is right isn’t always what is easiest. I think that’s the case here. I appreciate all that contributed to this important dialogue and hope that if nothing else, this sparks a conversation on your campus or district about late work policies. We can’t get better if we aren’t open to the idea of change.