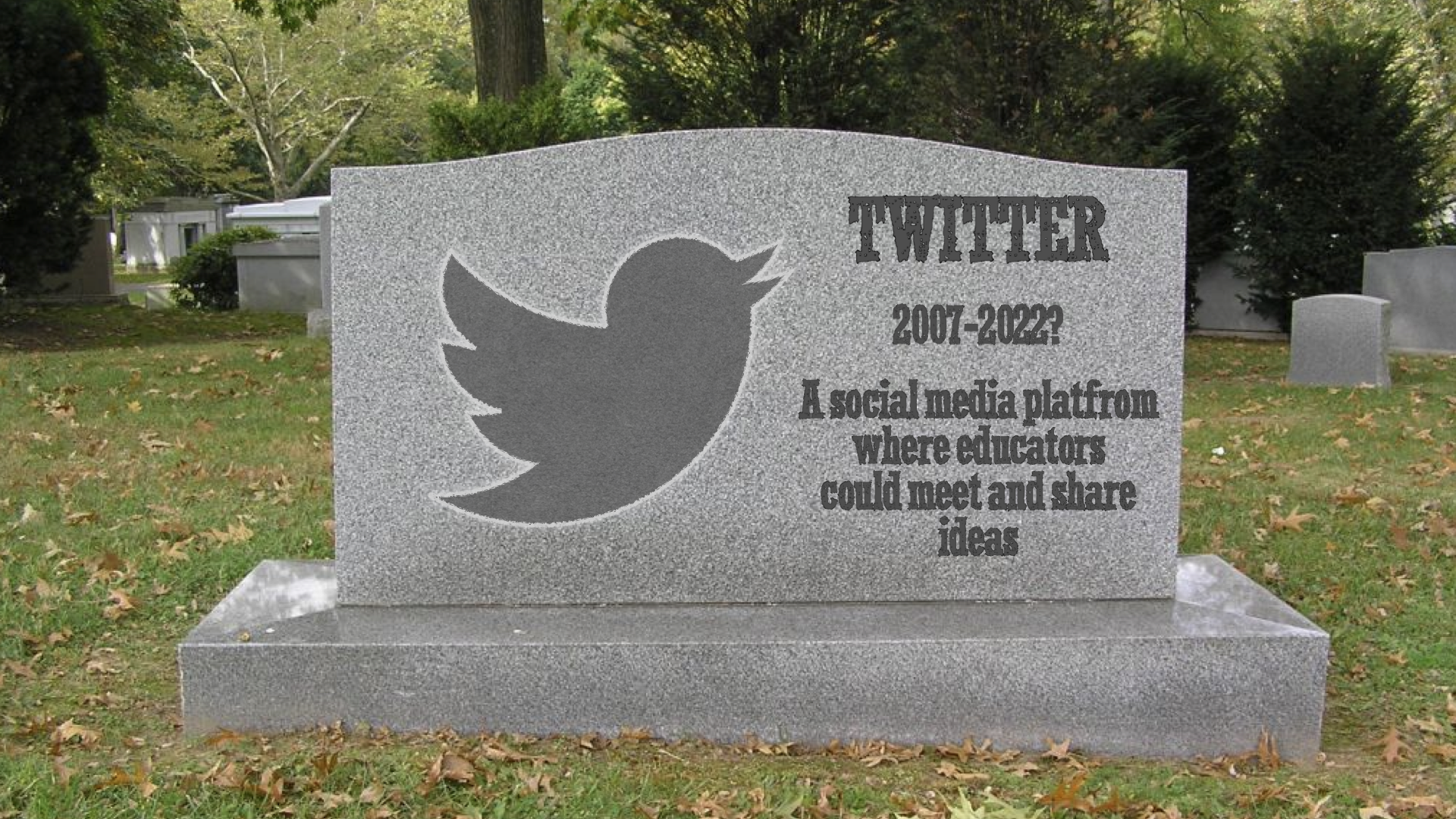 In case you have been living under a digital rock the last couple of weeks, you might have missed the circus that is the Elon Musk take over of Twitter. Educators have been scrambling and theorizing what will become of the platform after some interesting changes since the takeover.

Somewhat ironically, I posed the question on Twitter if people thought it would die or if it was just going through some changes. The responses (many in gif or meme form) varied as you might imagine. Some think it might be wise to proceed with caution:

Others prepared for the worst:

While still others cautioned against getting to pulled into the drama of the shake up:

I tend to be cautiously optimistic but regardless of the eventual outcome, it has caused me to reflect on my own Twitter journey. I’ve been a member of the platform since it blew up here in Austin at the SXSW event in 2007. That’s 15 years of being a part of the social platform that started out as just a stream of ideas and celebrity lurking. Over the years, like everything in technology, it has evolved. Improved ad-tracking for revenue and algorithms that bring only certain people you follow to your attention more often aren’t surprising changes.

However, just as the platform has changed, so have the users. Many younger educators have been flocking to TikTok and Instagram for the past few years and several administrators have found a platform like LinkedIn to be more their pace.

For me, Twitter remains one of my go-to resources for trending news and connections with others. I definitely give it credit for helping launch my personal brand and many of the spoils of my current role as an educational consultant and speaker. However, I’ve found myself drifting away from the platform the last couple of years prior to the Musk takeover.

Why use social media?

Sometime around the 2016 election, social media sites like Facebook and Twitter became toxic places to share ideas and thoughts. If they weren’t toxic, they were echo chambers that didn’t invite professional discourse or discussion. Educators have been attacked for sharing controversial ideas like “Critical Thinking” or for sharing activities from their students that capture independence and free-thinking. Librarians in particular have been targeted by groups recently when it comes to what books they put on their shelves. The truth is, Twitter has become somewhat full of land mines.

Add to this the recent debacle with Eli Lilly and Company’s fake verified account and educators have to wonder if the juice is still worth the squeeze. That said, I still value the connections that can be made over social media…if you can sort through the noise. Aside from the toxic trolls that lurk online, there are algorithms, targeted ad-marketing, bots, and spammy inboxes messages to sort through to get to real content. It’s becoming cumbersome to use.

The power of a global PLN

Once you navigate the trolls and noise, you become aware of the power of being connected with virtually anyone in the world. Looking for help with your virtual Vietnam project? Trying to connect with a class in South America? Twitter is still the go-to resource for many educators as of this writing. It’s fast and easy to connect on and its use of hashtags to organize posts and chats is unmatched.

This connection and who you follow are the most important parts of using twitter as a professional educator. Facebook offers some of this with its specialized groups. The problem is this presents a bit of conflict between educators seeking to keep their personal lives personal. Maintaining two different accounts could be a solution, but you still have to navigate spam, ads, and other noise. The artificial intelligence is so powerful that once while having a conversation about visiting Utah, I opened up my Facebook app and saw all sorts of ads telling me where to go when I visit. Yes, “they” are listening.

Staying connected after the conference ends

One of my most memorable times as a Twitter user came in 2009. I was attending Alan November’s BLC conference in Boston when I stumbled into a lobby full of Twitter educators that I had been following. Even though I didn’t know these “edu-celebrities”, I was excited to meet the actual people that I had been following. Say what you will about these folks (here’s a great write-up on edu-celebrities), but they have an impact on me and my teaching.

When I attend a conference, I often gravitate towards sessions that are presented by those that I follow. I’ve seen their written ideas or videos but now I want to see them do their thing. Most conferences provide an app that include some sort of social feature. Using the app, I connect with other educators at the event in the hopes of continuing to learn from them. However, these apps are only temporarily social. Most of the activity comes a week before and ends a week after the event is over. Alas, I find myself deleting the temp-social app off my phone usually a few weeks after the event ends.

Why not have a social platform that is focused on education?

Facebook is for friends and finding former high school sweethearts. LinkedIn is for people looking for work or hiring for a business. Nextdoor is for neighbors complaining about loud banging noises in the middle of the night or missing pets. There really isn’t a dedicated modern space for educators to connect.

Yes, there have been (and still are) social platforms for educators. Ning was one of the first platforms to try this before it became corporate. Other sites like Classroom2.0 still exist although many aren’t very active or have limitations. Facebook groups can be a good adhoc way to gather but groups like the Principal’s Desk with over 200,000 members quickly become overwhelming.

A platform built by educators for educators

Last November, I met with a group of like-minded educators to discuss the pros and cons of social media and the vitriol that seemed to be increasing towards educators and educational leaders. Add to that, the seemingly endless stream of bots, data mining, and artificial intelligence that sucks us into “doom scrolling” rather than productive conversation and connection. We discussed many of the platforms mentioned in this post and decided that the “perfect” platform for modern educators didn’t exist.

So we decided to build it ourselves.

I know what you’re thinking. I’ve heard it before, even recently from someone I consider a dear friend.

Maybe we don’t need another one, maybe we just need a different one. One that helps educators by aligning with their wants and needs. One that helps us stay connected after the conference ends. A organic platform that isn’t controlled by AI but instead run by human intelligence.

And so, K12Leaders was born. A social platform built by educators for educators. There’s no data-mining, just organic conversations. We’ve created spaces for educators looking to earn some extra income (our Edugigging community) while remaining in the classroom. There’s a space to host virtual book studies with embedded Zoom video. Some groups are centered around in-person events like the upcoming NYSCATE conference. We even made a group from my Virtual Trivia Nights (next one coming this Thursday!).

Being a part of building something special

I have to admit, it’s kind of fun being a part of the early stages of a social platform. As a group, we have the power to decide the direction of how the space grows. Our early adopters (nearly 1000 members) have helped shape and mold the space. One new feature request was a “conference events calendar” where you can search for dates, event types, and locations to see what conference you should attend next. There are lots of other features we are thinking about, but before we do too much, we want and need more K12Leaders.

Disclaimer: This platform is not Twitter, Facebook, or LinkedIn. It’s our space (not MySpace) to collaborate, share, grow, learn, and connect outside of the very public social platforms out there. It is content and connection-driven. Still not convinced? Sign up and kick the virtual tires. If nothing else, see what it’s like being a part of a social community at the beginning.

Once you get in there, look me up and connect. I’m @Carl. (Another advantage to getting in early means you choose your preferred handle before it’s gone.)

I hope to see you online as we build this new social journey together.

0 comments on “If Twitter Dies, Where Do Educators Go?”