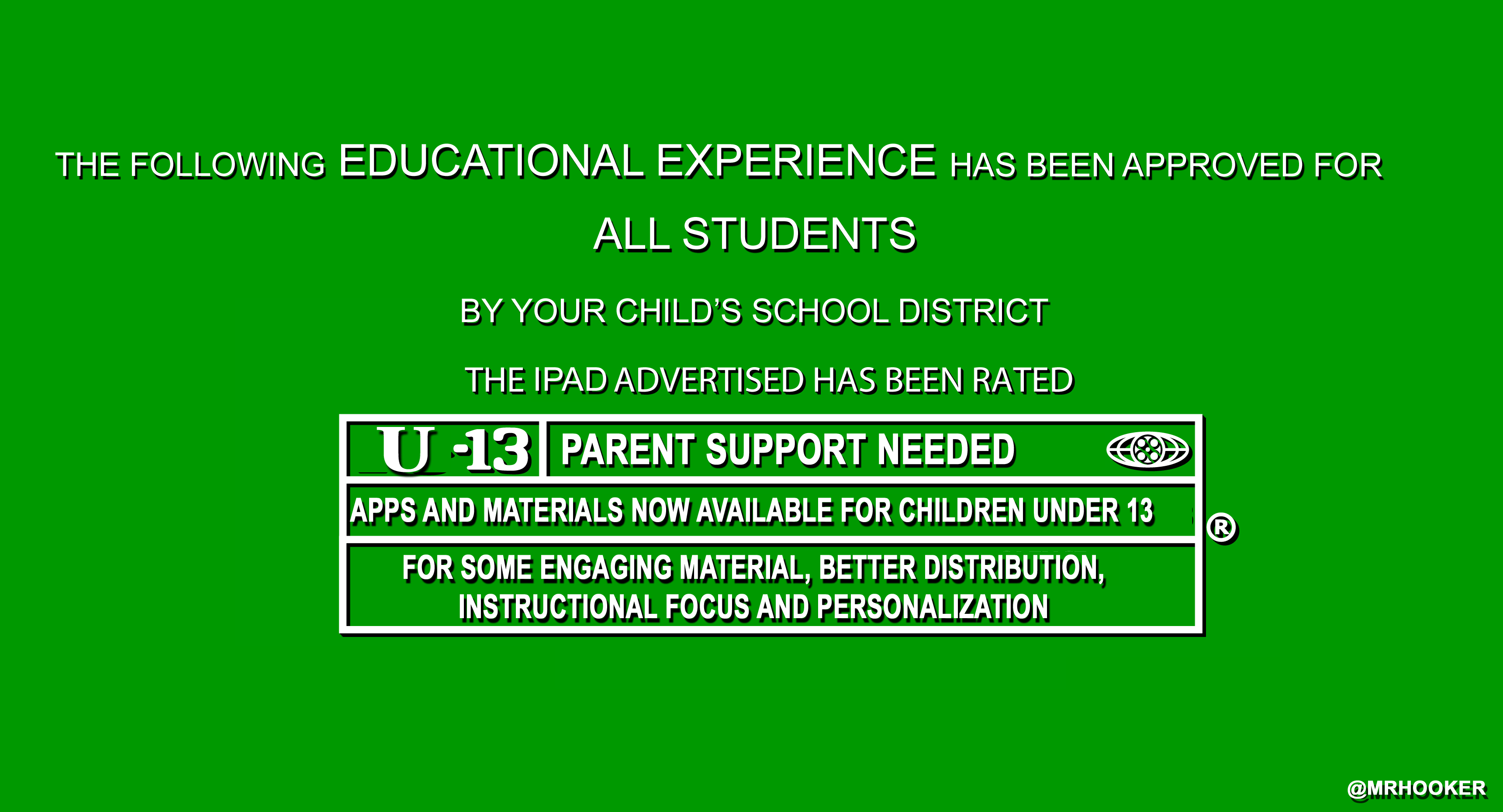 As students fill the hallways of our schools on their first day back, there is a major change afoot for those kids under the age of 13.  Students in the pre-teen realm have always had less options when it came to personalization and use of certain websites/social media.  While some of those rules still apply when it comes to the web, Apple’s new system of allowing districts to issue Apple IDs for those students under the age of 13 (with parental consent) means that the days of every elementary students having the same standardized iPad are in the past.  Combining that with the new deployment system and (in our case) an MDM like Casper, and we are finally starting to see some of the real powerful potential of the 1:1 iPad platform.  While I know there will be some glitches (there always are in technology), I’m looking forward to the improvements listed here this year for our K-6 students.

For the past 2 years, our elementary students have been living in the 1:1 world when it comes to devices, but haven’t really gotten the full-fledged personalized experience of their older counter-parts when it comes to apps.  Because we couldn’t have individual Apple IDs on each iPad, we used Apple Configurator to provision “images” to sets of iPads at every grade level. This was a painfully arduous process that entailed having a Support Tech go classroom to classroom with a Macbook and provision the images to each iPad.  With the amount of time and man-power it took to accomplish this, we basically had time for one app-refresh cycle every year.  Besides the inefficiency of this model, we also had several times when iPads would get “hung up” during app refresh and have to be completely wiped, losing important student work that hadn’t been backed up.  Now that every student will have an Apple ID, we can “push” apps out to students over the air (OTA).  If a classroom wants an app, they contact our MDM campus manager who loads the app and pushes it out to the class overnight.  If it’s a free app, the kids can even download it themselves!

Since we basically had two groups (K-2 and 3-5), that meant front-loading the images with pretty much every app we would think to use for the school year.  The resulting images were somewhat heavy (taking up over 6GB of the 16GB space) and many were unnecessary depending on your grade.  Here’s our example list of apps for elementary last year. You could have 3rd graders looking at 5th grade apps that they didn’t even need. While we’ve really focused on productive apps vs. consumptive ones, we at least knew that all kids would have the tools they needed to create a finished product.  Now that we can now push apps over the air, that means starting with a much leaner set of core apps to start (nearly all “productive” apps) and adding those content or grade-level based consumptive apps as needed.  One drawback of not having a set image on them is that iPads are essentially naked to begin the year until the students have their Apple IDs set up.  Enter the always clever Janet Couvillion. She’s an Ed Tech at one of our elementary campuses and she created this tremendous Thinglink about all things you can do on an iPad with only basic apps: 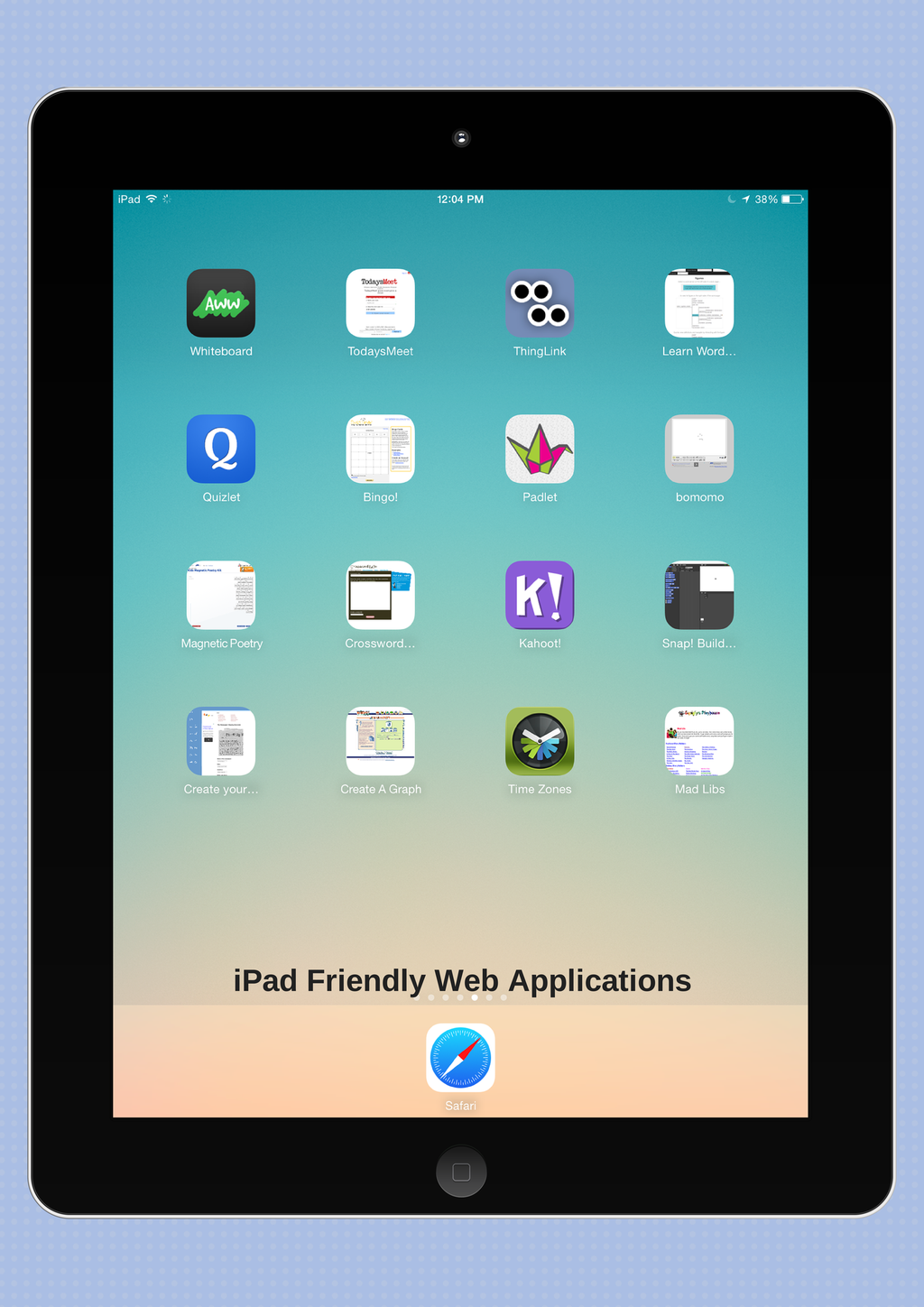 We utilize eBackpack as our web-based and app-based content distribution system.  However, we’ve also found some successes using iTunesU at the upper grades when it comes to quickly creating courses for students.  Now that our students under the age of 13 have Apple IDs, we can have them enroll in a class course at the beginning of the year that a teacher can use to push out content as it becomes relevant. We can also provision specific iBooks or class sets of iBooks to students based on their Apple IDs, something not possible in the past.

Another potential bonus of all of this is the new Casper Focus feature we had a kindergarten teacher test for us last year.  With all iPads in this new system and each student with an Apple ID, a teacher can now “control” or “lock-down” all the iPads in his/her class into a specific app.  While I’m not a big fan of the lock-down control model when it comes to teaching and learning, I do know there is a time and place when this might need to happen from time to time.  With state and national testing moving to an online platform, we’ll need to have this ability going forward.  This year we’ll be pilot testing the ACT Aspire test on iPads for students in grades 4-9 and we’ll also be piloting using a Desmos Calculator app during our 8th Grade Algebra State assessment.  None of this would be possible without this new system in place without individually going to each iPad and enabling Guided Access.

In order to make this system work, we have to really rely on parent support.  They have to go through the online consent and Apple ID creation process for us to be able to utilize all the advantages listed above.  As a parent, the advantages to this program versus making your own Apple ID are many (here’s a Parent Guide from Apple).  They’ll be able see what apps their students are purchasing.  With their students being in the Under 13 program they’ll have less advertisements and data mining to worry about.  As a parent of a new kindergarten student, I was excited to not only set up her Apple ID because we can now mirror the apps she’s getting at school and put them on our devices at home to help with her learning.  I’ve always been a believer in the concept of a village raising the child and in our ever-increasing online world, the lines between home and school are no longer clearly defined.  This process gives us as a district another opportunity to communicate about the education of their child, which can in the end only be a good thing.

To help introduce parents to this process I made this somewhat silly 3.5 minute video (below) along with some instructions for them on their end.

The future is bright and no longer just for those born before 2001!