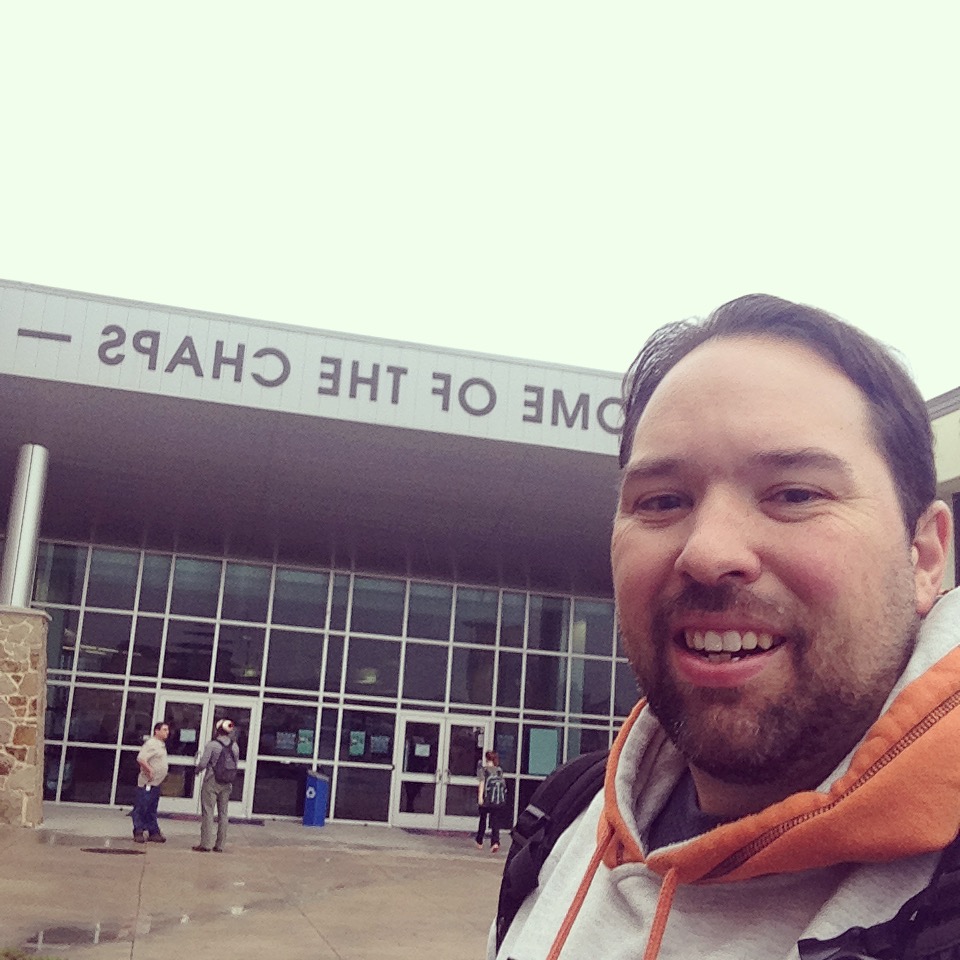 I’ve been blessed to experience amazing professional development from around the world.  I’ve had incredible, powerful conversations with people in my PLN via social media that help me learn and grow.  All that said, yesterday’s #Student4aDay Challenge was the most eye-opening and possibly most life-altering experience for me as an administrator in a public school.  What follows is my reflection on the day and some major “Aha’s” that I hope will guide both the future of professional development for our teachers but also the lives of our students. For those of you that want a play-by-play recap of the day, check out the hashtag #Student4aDay on twitter.

I blogged out my predictions and a little bit of the background for this challenge in this post, but the gist is I wanted to “be” a 10th grade student for a day.  My main goal was to see what student life is like in this 1:1 mobile world at a highly successful place like Westlake High School.  I was also curious about how they interacted with the teacher and each other, the desks they had to sit in, how they used technology, and generally, what their day felt like.

I “borrowed” this schedule from one particular student who agreed to let me shadow her. However, because we had a pre-scheduled site visit, I needed to do take both 4th and 5th period off.  It worked out well since World History had a sub and were going to just watch a video. I also had a AP US History teacher request I visit her class at 7th period instead of going to choir.  Since I was feeling under the weather and my singing voice was not up to snuff, I took advantage of the opportunity to see her Humanities course in action.

I made 5 predictions (or hypotheses) about how the day would go.  Here’s how they turned out:

1. Kids will be on their phones between classes – SOMEWHAT TRUE – There were a few kids texting or listening to music or even talking on their phones (rarely), but for the most part, kids were talking to each other.  They were having conversations about a certain class, a movie, a game, or what they were doing after school.  I assume some talked about relationships too, but they tended to quiet down when I got close.

2. My lack of a healthy singing voice will hurt me in choir – FALSE – Since I swapped out Choir for US History, this one never came to pass.

3. The desks will hurt my back- TRUE – I suffer from mild back issues, but sitting in these torture contraptions was getting to be down right painful by the end of the day.  I found myself fidgeting in them, turning to the side, slouching over, and generally just constantly shifting from one “cheek” to the other.

4. Technology use will be a mixed bag – TRUE – In the English class it was extremely hands on, with the teacher using Nearpod to engage student questions about Catcher in the Rye and even have us draw what we thought Holden Caulfield looked like.  Of course, the two computer lab courses heavily used technology as well. Most classes used the projector at a minimum, however one class, Geometry, had a long term sub and so he was relegated to only using the dry erase board.  No technology (except for calculators) were allowed out in that class.

5. My “real job” will affect my job as a student – I did miss 5th period for a meeting and during US History I was asked to help trouble-shoot with a Nearpod issue.  I tried to claim I was just a regular high school kid, but the class cleverly remarked that most kids could help troubleshoot technology, so I should too. Well-played…..

Class I was best at:

Interactive Media – of course!  The class was at the end of a Photoshop project designing a an advertising poster for the college of their choice to recruit students.  I observed several students working collaboratively on their posters (and some procrastinating). I came up with my Matthew McConaughey -University of Texas concept (pictured left) and nearly finished it within the 50 minute class period.  One of the quotes of the day came when a fellow-student called out another student for procrastinating to which she responded with “I’m not a ne’er-do-well!”

Class I was worst at:

Chemistry – This was a mixture of style and content. I’ve always been a big fan of science and when I think about my favorite high school teachers, science usually comes to mind because it’s so hands-on.  However, this particular class on this day was a review class, so it was very direct-teach over concepts I haven’t had to remember since…frankly….the last time I was in high school chemistry. (Quick! What’s Avogadro’s number?)  The students had been over this more recently, but my memory was shaky.  So much so that I failed the 2-question quiz over a couple of simple molecular concepts. 🙁

I could probably write a blog post on each class I was in and the overall student life.  However, I’m going to try and summarize what I discovered during this day in four major “AHA” moments.

AHA #1 – The schedule is overwhelming

From the amount of time you have (50 minutes) in class to the amount of time you have in passing period (6 minutes), the day flew by without much time for deep thought or reflection.  I realize that giving teenagers too much transition could spell trouble, but I barely had a second to digest what I had learned before abruptly moving to the next subject. And in the classes (like English and US History) where we were starting to have a good, deep discussion on a topic, we were interrupted by the bell.  I can really see the benefits of having some sort of hybrid block-schedule after a day like today.  In the end, I was completely exhausted at the end of the day and, strangely enough, just wanted to go home and play video games.

AHA #2 – The technology may have changed, but the kids haven’t

Sure they were on their phones during passing periods and occasionally they’d listen to music when done with an assignment, but for the most part, the kids were kids.  Typical teenagers with angst and hopes and dreams (channeling my inner-Caulfield here).  In the chemistry class, there were one or two students that tended to answer every question, while the rest of us (including me) blankly stared at the board. In between classes I even got into a spirited conversation with a 16-year old about how good the latest Tell Tale Walking Dead game is. The girls giggled and the boys sighed at times, but in general, the kids were respectful and attentive no matter what the subject. (save for a couple of girls I noticed texting under their desks during Geometry). One kid did try to use his camera on his phone to take a picture of notes on the board to which another kid called him lazy.  His response was priceless – “That’s not being lazy, it’s being efficient.”

AHA #3 – How much of this content will be relevant in later life?

I can understand that taking courses like Geometry and Chemistry and Business Infrastructure Management give you the ground work for some basic life skills.  However, I can honestly say I’ve NEVER used Avogadro’s number (6.02×1023 for those of you dying to know) in my real life. In fact the last time I used it was 24 years ago when I was a sophomore taking Chemistry.  Why do we feel compelled to still teach the “4 core” subject areas every year in high school?  Is it because this is what we’ve always done?  I can see it being useful to those with a real interest in Chemistry or Calculus or Poetry but why force it on every student?

I’ve written in the past that technology is the “Great Amplifier” when it comes to teaching.  It can make a good teacher great and a bad teacher terrible.  In the classes I felt most engaged were the ones where technology was “invisible” in a sense and the focus was on the content and the discussion. I can tell you almost verbatim things I learned about Thomas Nast political cartoons based on the student discussion but I can barely remember what mathematical equation I was told in Geometry.  The biggest difference in those classes was both the style in which the teacher facilitated discussion but also the physical configuration of the classroom.  Desks in rows tends to imply that it’s all about focusing on the teacher (always exceptions to this too, as I discovered in the tremendously engaging English class).  Desks with the ability to turn or face each other made the center of the room the focus, a place where ideas could be shared and discussed without judgment.

All in all, I have learned a lot from this day, much of which I hope to apply and help steer changes in the classrooms and schools for kids in the coming years to make it more about student-centered, personalized learning. It’s been an eye-opening experience that I hope others in my district (and in other districts) will attempt.  I even reached out to some law-makers on Twitter to invite them in to do the same.  It was both a humbling and frustrating experience that I was honored to be able to attempt and it will live with me forever.

Now, if you’ll excuse me, I’m going to go home and play some video games.

Editor’s note: Tracie Simetal took on the #student4aday challenge as well and live-blogged her results on this Google Doc.  Kudos to Tracie and any other administrators willing to take this on!

Update: The Austin American-Statemen ran a report on this experiment and posted it here: http://www.statesman.com/news/news/local/administrator-spends-eye-opening-day-as-student/nkHWG/

14 comments on “Eye-Opening Reflections on the #Student4aDay Challenge”