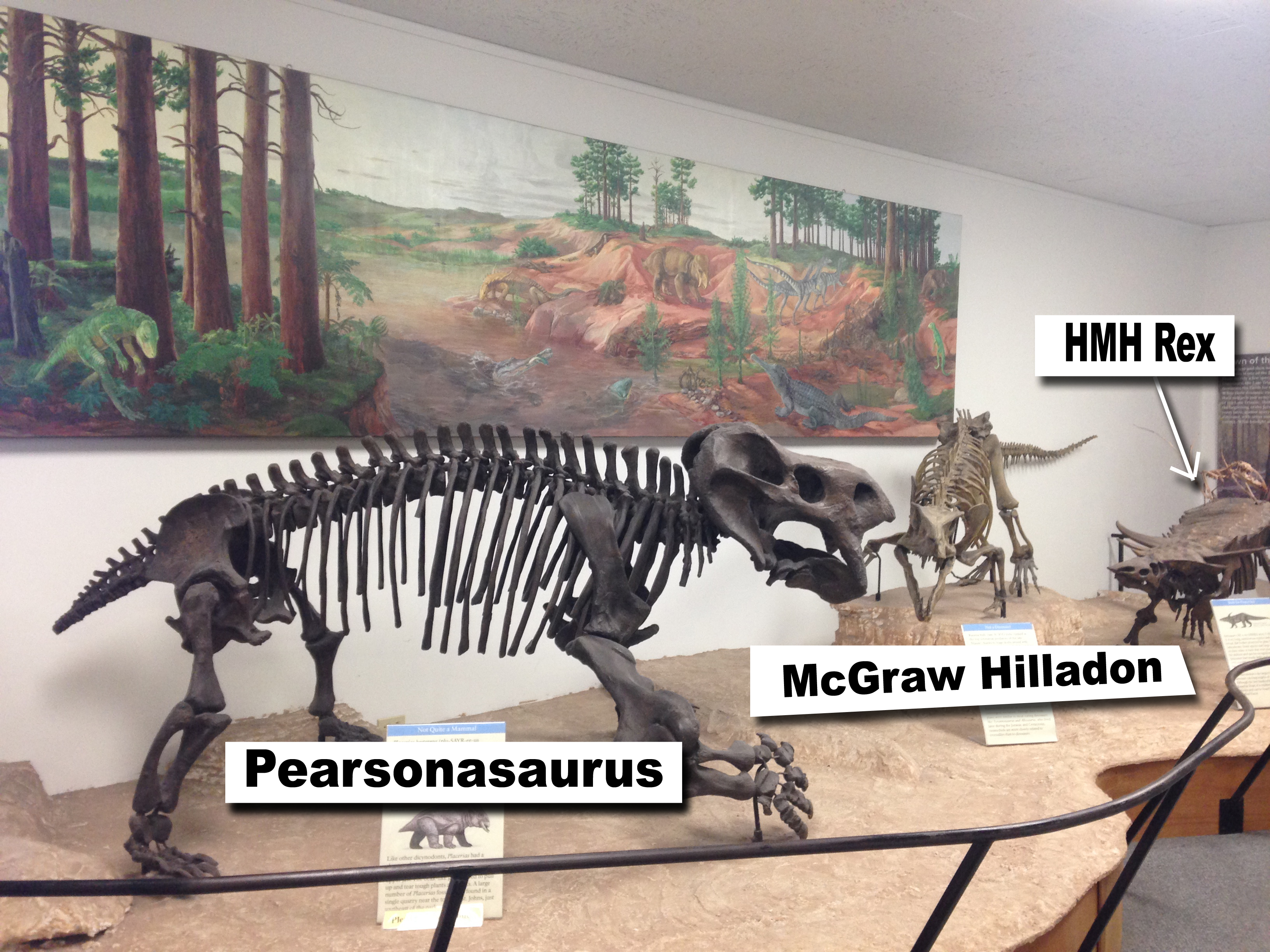 My daughters love talking about dinosaurs.  This summer we visited the dinosaur park in Cabazon, CA (made famous by Pee Wee’s Big Adventure) just so they could climb inside a dinosaur. I’ve shown my oldest the original Jurassic Park (not the scary parts) and she has begun to ask me, “Daddy, what happened to the dinosaurs?  Are there still some around? Did they become birds?”

Lots of questions and lots of theories but it’s made me think about our own educational landscape and the changes that have been happening dramatically the last 5-7 years when it comes to mobility, social media and content creation.  We still have a lot of dinosaurs walking the earth in education, namely the major textbook companies. What is going to happen to them?  Will they go extinct or evolve?

Today, I attended a State Board of Education session on “Educating the Digital Generation.”  I was pleased to see many educators like Scott Floyd (@woscholar) and superintendents like Randy Moczygemba (@rmocyzgembanb) present to share their frustrations and concerns around the digital textbook industry. (You can view their testimony here: http://www.house.state.tx.us/video-audio/)

However, being that textbook publishing is a big business in education, the major textbook companies were also given time to not only defend their platforms, but also ask for more support.  The SBOE in Texas has some progressive members that support digital learning in schools but they also have some that seem to be steeped in learning from prehistoric times.  One such board member mentioned that “kids are stupid” when it comes to social media and that “using the slide rule is better for learning math than a graphing calculator.”

What does all of this mean for major textbook companies? I have an outlook for them, and judging by recent events, their future is bleak.  Let’s look at some signs that spell the demise of the “Big 3” (Pearson, HMH, and McGraw Hill) as well as the massive educational asteroid that will ultimately wipe them out.

With the government’s recent push for more Open Educational Resources (OER) and the already massively available “flexbooks” through sites like CK12.org, we no longer have to purchase an expensive, unreliable online textbook from a major company.  Instead of spending millions upon millions of dollars on textbooks, districts can instead dedicate that money towards staffing, technology, and paid online resources that will actually help kids with learning.  In Texas, we have our Instructional Materials Allotment (IMA) which allows for “local control” of funds so districts can choose what they want to purchase when it comes to instructional materials.  However, the most recent statistics show that 93% of those dollars are spent on traditional textbook resources, mainly from the Big 3.  Why is that the case if there is still local control?  Primarily it’s the “safe” thing to do.  No district wants to stick their neck out too far to purchase something not vetted or…*gasp*…perhaps even save that money for other instructional uses.

In addition to the OER resources out there, teachers and schools are sharing more than ever before.  Take a look at the hundreds of twitter chats happening online daily centered around education to see the explosion of sharing that is taking place.  Some of this sharing comes in the form of “paid sharing” via a program like TeachersPayTeachers.com.  I don’t begrudge an already underpaid teacher trying to make a buck (although profiting off other underpaid teachers is a slight concern), I do think the more open we are, the better the learning will be for our students.  I recently listened to Tim Berners-Lee, the “Father of the world wide web”, on the TED stage talking about how if he had made the internet cost money, it would have never turned into the great collective network that it is today. I think if we freely share resources and best practices, that crowd sourced content will ultimately make the Textbook-destroying asteroid even bigger.

MYOT (Make Your Own Textbook)

Ok, so a bit of a play on words of the BYOD (Bring Your Own Device) movement in Ed Tech, but when you take the OER resources and the crowd-sourced content being shared, why not just get the best teachers in the district or region and have them create their own book?  It’s not about the book, it’s about the learning standards right?  Paying teachers even HALF of what we pay textbook companies to make a better book, would not only save a district thousands, but also create a better product that is ultimately district-owned.  We’ve started down this road with the Texas History adoption, and during today’s state testimony, many districts reported successfully building and deploying their own “textbooks”.   I see this as the next evolution in content provision and can even see it further evolving to where kids start to create their own textbook.  After all, teaching the material is the best way to learn right? The meteor is approaching….

Some of the dinosaurs did indeed evolve and survived.  Those smaller mammals that were more nimble (i.e. smaller content publishers) survived and even thrived following the extinction level event.  When working with the Big 3, you must realize that they are publishers, not programmers.  I can’t begin to tell you the amount of man hours wasted with data uploads, failed ebook downloads, incorrect content, and massive lack of technical design when it comes to digital textbooks from the larger providers.  While I won’t mention names I can tell you that one company even creates a “bridge” product to connect it’s multiple products and product teams. Another when asked directly about integration with our student information system (SIS), stated that they “never mentioned it would be seamless.”

While you would think an eTextbook would save money, in many cases, because of how they are bundled, these cost districts almost the same amount of money.  In many ways these companies take fat checks from schools and districts all over the land to cover their massive bottom-lines, not to better serve districts.  The smaller, more nimble companies, on the other hand, start with programming and build a better project based on client feedback (that client being the teachers and students).

The Final Explosion and Aftermath –

Several districts here in Texas have started to join forces to fight these behemoths and their poor practices and heavy costs.  We’ve pleaded with them to join up with a company like Clever, which handles the automation of data from SIS to textbook company (at NO COST to the school or district).  Two of the three major textbook companies have told me that we “don’t need that kind of integration” or “sure it’s free for you, but it costs us.”  The fact that a company that gets millions of dollars from districts actually has the gall to say that is appalling.

And so, with this global killer approaching their industry, it’s obvious that the only thing keeping them alive is their sheer size and girth.  But like the dinosaurs, those that don’t evolve will become extinct.  And in some ways, maybe the educational world will be a better place because of it.

5 comments on “How Did the Textbook Go Extinct?”