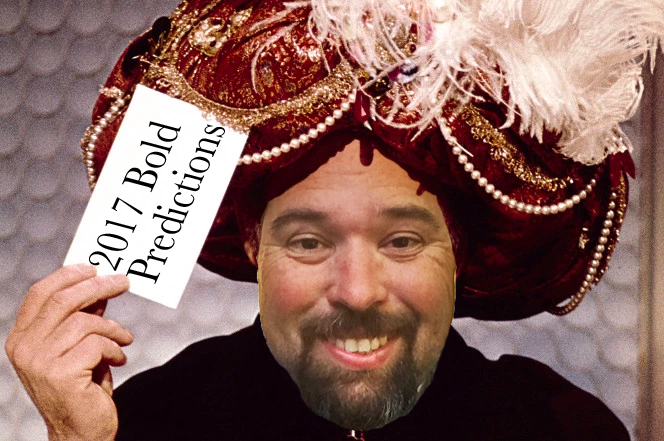 This marks the 5th year I’ve laid out a series of bold predictions around education and technology. Some years I’ve hit it out of the park (like in 2015 when I predicted Pearson would lose it’s massive testing contract in Texas) and others I’ve totally flubbed (like in 2013 when I said a non-Apple tablet would lead in educational sales).

Going back over the 30+ predictions I’ve made, I would say that about half of them have now come true. So while I may not be a Carnac the Magnificent, I’d say I’m just a step above Miss Cleo.

Let’s take a look back at this year’s predictions and see how close they came to becoming a reality.

Prediction: A Dual-Language school will open with coding as the second language

Outcome: Nailed it! (sort of)

More and more coding is getting integrating into the curriculum and not just become a thing to do on Fridays or for one hour in December. That said, we are still a long ways away from it truly being thought of as a second language. The state of Texas did pass a law this year that  counts coding as a foreign language credit, but only if a student has attempted and been unsuccessful in a traditional foreign language course. (See item 74.12.(b)(5)(B)(iv) buried deep in the TEA rules). However, some schools have now started to embrace coding as a second language and some schools (like Willmore Elementary in California) have started their own “Coding Immersion” programs in elementary.

Prediction: The POTUS will use SnapChat to give the State of the Union

I may have been stretching it but if you think back, I wrote this post prior to Trump taking office. Little did I know how he would utilize social media (Twitter specifically) to press forward not only his agenda but also some crazy tweets early in the morning to insult random people in the press. Thinking back at this first year in his presidency, I don’t know how far-fetched it would be for him to tweet out the next #sotu rather than deliver it. And who thought this was a good idea?

Prediction: The Learning “Movement” will take center stage at this year’s iPadpalooza

We did take a stab at some “walk n’ talk” sessions and of course with the APPMazing Race, had people running all over the place. However, with this year being the LAST year of iPadpalooza, I will say that in the future the movement will shift more towards “learning” as we prepare to launch the next iteration of the Learning Festival formerly known as iPadpalooza. (stay tuned to http://theLearningFestival.com for more news coming in 2018)

Prediction: Someone will invent a PokemonGO type app for education

Much like the PokemonGO movement, this idea had legs early, but hen fizzled out. However, as you may see with a later prediction, this could be a possibility in our future.

There have been a slew of companies trying to make headway in this arena around Ed Tech tools lately.  The one I mentioned in this piece last year (CatchOn) has grown leaps and bounds and is now receiving almost a Terabyte of data from over 10 Billion data points. All that data is taking us from this exploratory phase of Ed Tech towards a more robust and meaningful approach to how we use learning technology and applications in our school. I’m excited for the future, even if it’s not sexy…yet.

Outcome: Still a ways off

My excitement for mixing virtual and augmented worlds in our classrooms may still be way off base, but I think the concept still makes some sense. We have static classrooms with dynamic devices, why not have kids explore Mars while walking across the hall or visit Egyptian tombs while drawing hieroglyphics in Art class? The possibilities are endless.

Outcome: It’s here…just not mainstream yet

A couple of months after I made this prediction I was made aware of the documentary “Clouds Over Sidra“.  This film was created for the United Nations with the intention of making government officials “feel” what it was like to be a 12-year old girl growing up in a Zaatari Refugee Camp in Jordan. The responses from U.N. Officials were overwhelming, not only from the story but from the immersion into Sidra’s world via Virtual Reality. While this has all sorts of real-world applications, like the documentary, I’m curious to how this could affect education for the better. And more importantly, how long until George Lucas re-releases Star Wars in VR? I can’t wait to be sitting inside the Millennium Falcon next to Han and Chewy.

In this prediction I joked about a future classroom where much of the “low-hanging fruit” were taken care of by a digital teaching assistant called Frank. Much like Alexa and Google Home, Frank can respond to questions but also control various aspects of the classroom (imagine automated attendance!?). With the Internet of Things (I.O.T.) still in the early stages of consumer use, we likely wouldn’t see this in our classrooms for a few more years. In the meantime, we’ll have to settle for using our fingers to type out important internet searches like “When was the battle of 1812?”

Prediction: I finally publish my first children’s book…and this time I mean it!

For the last couple of years, I’ve ended with this threat…er….prediction. It took me a couple of years of motivation, but I finally found both the story and the medium with which I want to create my first children’s book. (Check out my “7 Strange Things You Didn’t Know You Could Do in Keynote” post for a hint)  While I haven’t published the book yet, it’s about half-way finished and should be ready for release in the Spring of 2018. Stay tuned for more details on that and if anyone knows of a good children’s book publisher…send them my way.

So that wraps up another year of bold predictions. I have to say that this past year was my best year so far, but I don’t want to start patting myself on the back quite yet. Now it’s time for me to go into my private bunker and strategize what will make 2018 list. Flying school buses? Self-tying tennis shoes? Tune in to find out.

Until then, see you on the other side.