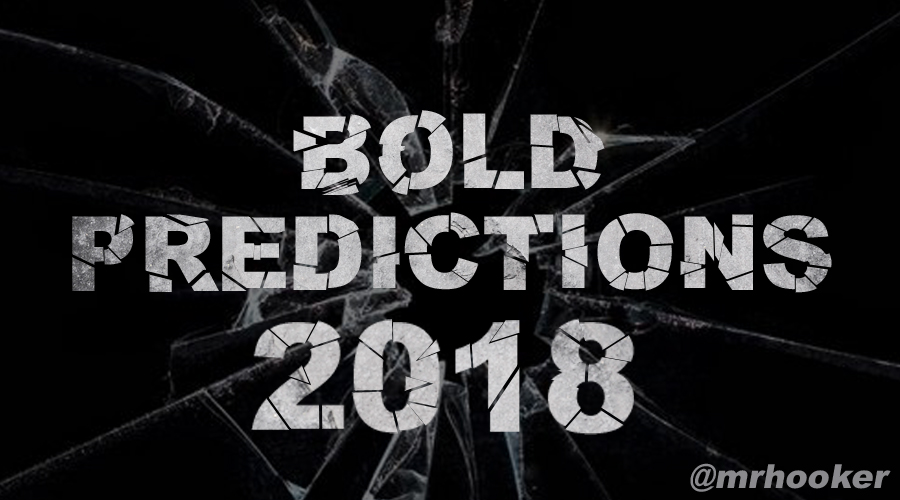 Tim Ferriss, the renowned and often maligned podcaster and author, doesn’t make resolutions for the new year. Instead, he likes to reflect on the year that has been and look at what events in his life brings him joy and what events do not. Using that data, he then makes sure to schedule more of what brings him joy in the year to come. Not all of us have that freedom, but I do like the intent behind his reasoning in doing so.

For me, I too don’t make resolutions, I make predictions. Predictions that are not always that likely to come true, but may not be that far-fetched when it comes to technology and our classrooms. Consumerism and pop-culture certainly play a huge role in the creation of this list. For instance, the Netflix series Black Mirror and the book Ready Player One definitely had some influence on this year’s list as both propose alternate, but possible futures.

As Tim does, it’s always good to go back and reflect before moving forward. If you would like to go back and look at the previous 5 years worth of predictions, look here. While I try and stick to education and technology’s influence on learning, I do sometimes stray to the world of pop-culture, politics, and everyday life.

And with that, I present this year’s bold predictions sure to go wrong in 2018:

AR will help us “see” students’ level of engagement

A few years back, the Melon Band was looking for funding on Kickstarter and I wondered what the possibilities would be for kids in school.  The premise- you can actually see what your focus looks like via an app on your smartphone. Now extrapolate that technology out a few years and add a level of augmented reality. I predict there will be a future where the teacher can hold up their phone or a tablet and instantly see what the level of student engagement is in their class.  I bet with some upgrades, you could even change your voice to the Charlie Brown teacher voice, “Wah wah wah wahhhhh” and watch their engagement tank.

In a future world where you need to be adaptable in an unpredictable work force, being badged as an expert in several different areas could be highly marketable. Rather than spending 4 years working on one field of study, why not spend a few weeks or months getting credentialed as an HTML5 coder or a social media guru? The other benefit (besides saving more than a trillion dollars in student loan debt), would be that current employees could use badging to continue to grow, learn and improve on their craft as well as other topics they are passionate about. The flexibility and targeted focus of micro-credentials could help a company improve in areas where they have weaknesses not by hiring more people, but by improving their existing work force.

A school will fully implement AI to help with learning disabilities

Sugata Mitra had the idea of putting a “computer in the wall” to help kids teach themselves through student agency back in 2005. While this concept showed that kids with proper motivation can learn just about anything, there were still some holes to fill. With artificial intelligence and enough data points, we could get to a future where schools and classrooms can immediately learn a student’s behaviors and preferences that help them learn. The role of the teacher would be more of a project manager and instructional designer for each student in their class as they use the data to create experiences that help their students expand their future ready skills both as an individual and as a member of team.

My friend and colleague Tim Yenca (@mryenca) just returned from a trip to Disney World and recounted his experience with the Pandora ride there. The ride involves the use of virtual reality goggles and physical experiences (such as the feel of the beast you are riding actually breathing on your legs) to immerse the player into the world. With improving VR technologies and high-end resolution, it’s only a matter of time before that experience is combined with some of haptic suit (via Ready Player One) to have your students truly experience an event in history. Imagine, being in the theater when President Lincoln was assassinated? Or being on the ground when the troops stormed the beaches at Normandy? That’s the kind of experience that you can’t get from reading a textbook.

Really? Is this that hard to envision in today’s political climate?

This year #EdTechPoetrySlam becomes a thing

Shout out to Lisa Johnson (@techchef4u) for getting this idea started at the last iPadpalooza when we took 12 speakers from around the country and threw them on stage for 3 minutes without anything (no props!) except their words and microphone. I’ll admit this isn’t that bold of a prediction as I know there will be a version of this at Tech & Learning Live in Chicago (May 11) and also a soon-to-be announced exclusive after hours event during this year’s ISTE. Stay tuned for more details on that….

A ride-sharing app for parents will be invented

I have to give credit for this to my own local group of amazing community parents who brought up the need for this at a recent tech talk. Our students have tons of after school activities that they attend. You see a parent pick up their own kid to take them to the same place you are going with your kid after school. Rather than having parents play chauffeur to their kids and never have time to run other errands, why not coordinate all of that in an Uber-meets-NextDoor type app? This app would allow parents in a community to coordinate driving kids to similar activities thus cutting back on traffic and helping connect people with similar interests. Of course, the old fashioned way to do this would be just to go talk to another parent about this, but who does that these days?

Oprah will run for President

Just making sure you were still paying attention, but she did deliver a powerful Golden Globes speech!

Drones in education could be a thing

While the rules and regulations around drones seem to be ever-changing and all over the map, the role of these devices in our future is certainly going to be disruptive. Knowing that these devices will play a part, what do we need to teach kids about it? How can we use this technology to give us a different view on learning? This is more than a lesson on how to build a drone for sure. The sky’s the limit….(get it?)

“The Learning Festival” aka LearnFest launches with some unexpected twists

This past year was the last of our iPadpalooza event. The rebranding of this event into “LearnFest” has been a long time coming and this year will only feature a smaller prototype version of the event (LearnFest launches to the public in June of 2019).  That said, there are a couple of ideas we’ll be trying that I can promise you have NEVER been done at a conference or learning event. Keep alert for special invites to this year’s event by following the @TheLearnFest twitter account or this blog.

My new children’s book gets a publisher and is actually published!

This is less a prediction and more of a call for help.  Maybe I should launch it on Kickstarter….

A Boba Fett movie will be announced

Just making sure you read until the end. It’s been rumored but this is the year it becomes official! 🙂

0 comments on “Bold Predictions Sure to Go Wrong in 2018”