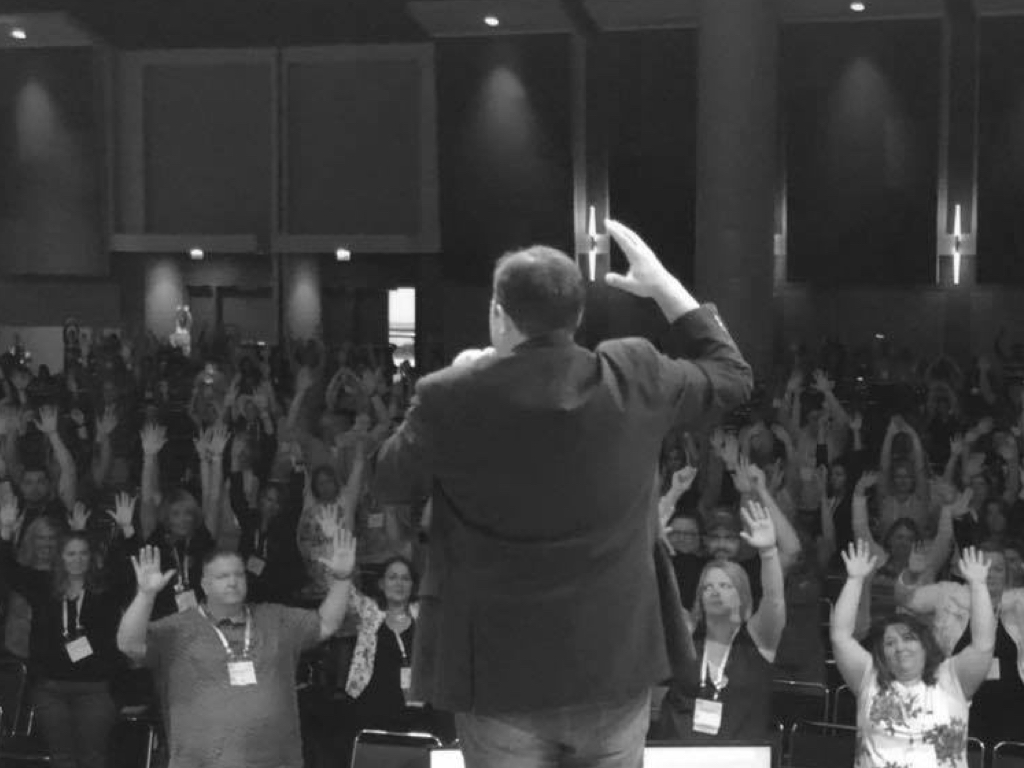 I spent the past 21 years in education as a teacher and administrator. During that time I spent a great deal of my efforts on bringing high quality professional learning to our staff and community. In many cases, the professional learning events we provided would have not been possible without the help and support of an amazing team of educational technologists and coaches. While surveys and reviews of our work was always very positive, I started to learn during my career that sometimes, teachers need a change of voice and perspective to inspire them.

In 2011, I remember Dean Shareski being in Austin for a TEC-SIG event. I’d followed Dean on twitter like thousands of other educators and had been a part of his highly engaging conference sessions. When our librarian (Carolyn Foote – a superstar in her own right) told me that Dean was willing to come in a day early and do some training with staff, I jumped on the opportunity.

Dean spent the entire day at Westlake High School training teachers on digital literacy, creativity and the importance of building a good network. While these were all things that Carolyn and I had been preaching to staff for years, there was something magical that happened when Dean said it. The staff lit up with ideas and began to come to us inspired to try new things.

As I left that day, I remembered two things that have stuck with me and are now the driving force in my new career as an educational consultant and speaker:

Over the years, I’ve been lucky enough to get to know Dean better as well as many other educators that travel the world making an impact on education through story-telling, resource-sharing, and idea-inspiring professional learning. As someone who now does this for a living, I hold that responsibility with the upmost importance. A district is putting their trust in me to not only align with their vision, but also inspire their staff to grow, innovate and learn.

Our district had run several extremely successful professional learning events with iPadpalooza and LearnFestATX. These events brought in speakers and ideas from all over the world. Our staff were exposed to some of the greatest minds and most passionate educators I had ever met. As we were gearing up for our 2018 Professional Learning Conference (an internal-only event required of all staff to attend at the beginning of the school year), we debated who to bring in as a keynote speaker. In the past we had brought in a mixed bag of speakers. Some were inspirational (like Angela Maiers) and others were not as well received for a variety of reasons.

When we surveyed the staff the number one reason why they didn’t respond well to certain speakers, the top reason was a lack of authenticity. They felt as they were being sold an idea that either they weren’t ready for or felt like they didn’t have the support for (see my reason #1 above on timing). One staff member even wrote in her review of a particular speaker that she felt like she was “listening to a used car salesman”. Those reviews and the feelings of staff have greatly affected the way I do things when handed a microphone and a stage, but also really put the pressure on me and my team to bring in the best speaker possible. One that was authentic and would inspire as well as someone who truly cared about being on stage and sharing their story.

Enter Tom Murray. I’d gotten to know Tom over the years through my work with his organization Future Ready Schools. He and I share similar beliefs and approaches when it comes to making the most of your opportunity on stage in front of a school staff. As we are friends, I didn’t want to introduce him as I felt like that could affect perceptions of the staff (“oh, it’s one of Carl’s friends), and wanted to see how they would take him without any background. One of the trademark moments of many of Tom’s talks is a part where he talks about “misunderstood song lyrics” and how what we communicate can sometimes be misread. While I’ve seen him do it a bunch of times, it culminates with the crowd singing Bon Jovi’s Living on a Prayer with extreme enthusiasm.

Knowing my staff as well as I thought I did, I bet Tom back stage that there was NO WAY the staff would respond to this. Needless to say, I completely lost my bet. Not only did they respond to him, his message, and his story, when the Bon Jovi part came, they stood up and sang. And not just the next lyric, they sang the ENTIRE SONG!(See below) Later, I came on stage as Tom received one of the first standing ovations I can ever remember our staff giving.  I told the crowd that he was my friend, but if he didn’t do well, I was going to claim I didn’t know him :).

Tom, Dean, Angela, and others have spent thousands of hours working on their craft as orators of information. They truly embrace the opportunity to share with staff from all over the world. They provide an authentic and different voice that schools need when the timing is right. This blog isn’t necessarily a tribute to them, but more of a reflection of an “awakening” I had while being in their presence as well as the many amazing speakers we had hosted over the years.

Having someone who agrees with your vision and can effectively articulate your message is a powerful thing. If the timing is right and the staff is ready to hear the message, brining in the right outside voice can have a positive impact on your learning culture for years to come. And most importantly, as teachers take ownership of that message, it will ultimately impact the learning of thousands of kids in classrooms in your school.

School districts spend millions on technology and flexible furniture, but the hardest thing to change is pedagogy and culture. Do not feel like you have to do it all by yourself. Bring in authentic voices to help you light a fire behind your vision and use them as a catalyst for the change your striving for.

I for one am glad we did with Dean, Tom and Angela. Their impact and support over the years is still with me and I will forever be grateful to them for both inspiring me and seeing the power of this work.

About to watch my first Hooker keynote. @mrhooker #ties16 pic.twitter.com/r3w3kUdrjT

Interested in bringing Carl in as an outside voice for your next event? Reach out here: Mrhook.it/speak