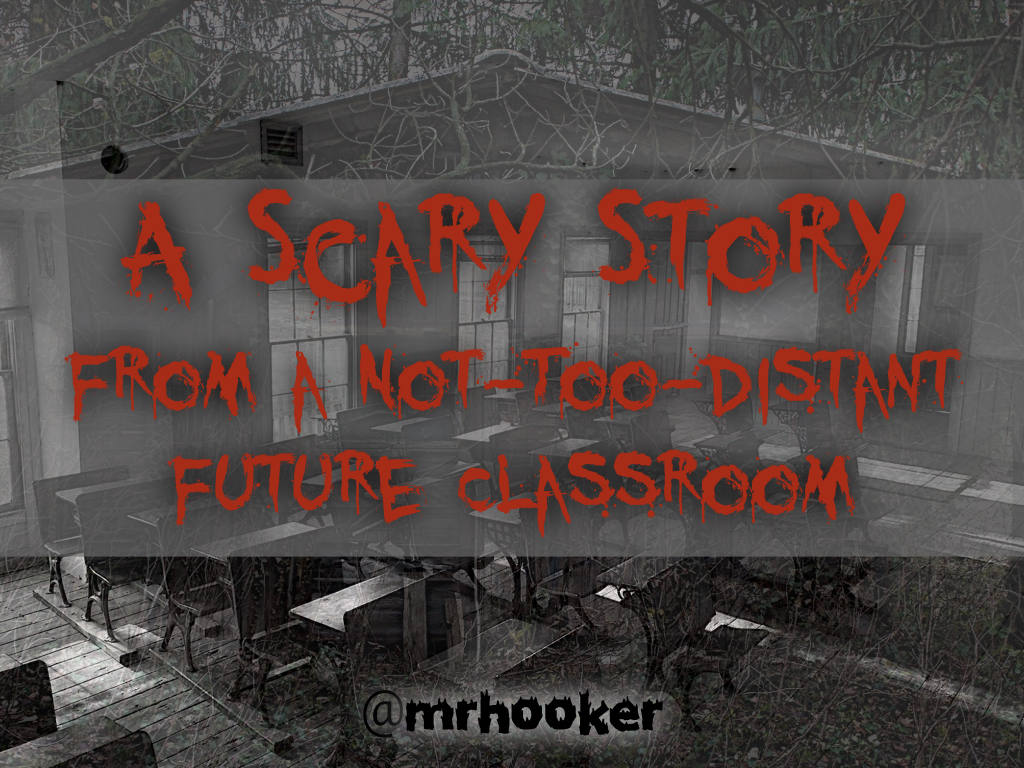 As Ms. Shannon entered her learning studio with the familiar ‘whoosh’ sound of the automatic doors opening, she noticed something different about her students.

It wasn’t the dried blood pouring from their ears or the vampire-like teeth they seemed to all be sporting. Being a teacher for 20-plus years, she had become accustomed to kids not following along with the school rules banning any type of costumes or “Halloween attire” from the school. Having fought (and lost) many a battle with parents, she had given up hope in some ways that the kids (or better yet, their parents) would actually honor any type of school rule.

No, what was different was that they all seemed to be actually sitting quietly waiting for some direction.

She dreaded this day.

From her first day as a teacher in 2020, to the present year 2041, she always hated dealing with typical rowdy behaviors from her 3rd/4th grade mixed class on October 31. It became a huge pain to try to keep them engaged in any type of lesson. She tried to have them create their own virtual haunted houses and even used augmented reality to zombify their “Facetagram” profiles. Nothing seemed to work.

They were obedient kids, but their boredom tolerance was almost non-existent. She felt as if she had to always entertain them and on Halloween, when they had visions of ‘safe-for-school’ candy dancing in their heads, she knew it would be particularly difficult to keep them engaged in any task.

So, this year, she decided to try something different. Something that would TRULY scare them.

“What? Where? Today? Our parents didn’t get a note, how can we do this?” the students questioned.

“Will it be a virtual field trip?” some pondered as the teacher liked to integrate virtual reality into her lessons regularly.

“No, it will be an ACTUAL field trip,” the teacher responded.

Following some moans and groans, the students slowing rose from their flexible furniture and ambled in zombie-like fashion past the interactive wallpaper at the front of the class (which was currently displaying a misty cemetery setting with headstones that had each of their names).

“Should we take our tablets?” one student asked.

“No, for this you will only need your eyes, your feet, and a snack,” replied the teacher.

As the self-driving bus landed in front of the school, the students filed in with a murmur. There was a mixture of excitement and fear. Usually all field trips had to be approved by parents, and most of these students had never gone anywhere without their parents careful planning. From pre-planned “play dates” when they were 3 and 4 years old, to the cavalcade of TaeKwonDo lessons, Oboe Practice, and Drone Racing League meets, they had all lived extremely scheduled and pre-approved lives.

After a quick flight out of the city, the bus came to rest in the middle of a forest.

“Alright class, everyone out!” the teacher exclaimed.

The students noticed her demeanor had shifted from grumpy to cheerful, which put them all at ease, albeit she seemed to be overly cheerful.

“Students, today you are going to be a part of something you have never experienced. In a few moments, I’m going to leave you alone here in these woods.”

The students shifted uncomfortably in their self-lacing shoes. Some began to look nervously to each of their classmates as if to say, “Do you think this is real?”

“Somewhere, there is a note giving you directions that you’ll have to uncover, but until then, good luck.”

And with that she stepped onto the bus which quickly flew up into low-hanging grey clouds and disappeared.

For what seemed like a lifetime, the students stood still, mouths agape.

“How could she leave us here?” one boy with an interactive t-shirt displaying a 38-year old dancing Billie Ellish commented.

“She’ll be back. I’m sure of it,” a girl with three pig-tails reassured.

After a few minutes, when they realized she wouldn’t be coming back, many of the students began to gather in small groups trying to decide what to do next. One group elected to stay right where they were until their parents came and got them. Another group started to cry and scream from the stress. A third group immediately began looking for the note the teacher had mentioned.

One of the girls in the third group, Sheri, had been a part of “the Scouts” as they had now been named. (Boy and Girl Scouts had been merged in 2036) Sheri had some knowledge of survival skills and immediately took up a leadership position in the group.

“Listen, we can’t wait here for someone to come get us. This is a challenge that we must overcome together. Our teacher is always talking about how we need to collaborate more, think critically, and problem-solve. I think this is a test to see if we can do that,” she stated.

“There are 20 of us here. If we work together, I’m sure we can find the note the teacher mentioned and get out of here.”

“LOOK!!” one of the boys shouted. “There’s an old cabin over there!”

The students gathered closely together as the dilapidated cabin seemed to leer at them behind spider webs and dead vines climbing along the sides of its walls.

“What are you crazy?!? Go into that place? NO WAY” one of the kids commented.

Sheri reassured them,”You don’t really think our teacher would leave us out here with something dangerous? She’d get in so much trouble from our parents. I think this is all an elaborate trick.”

As the words escaped her mouth though, Sheri began to wonder. She had noticed a change lately with Ms. Shannon. She seemed to be getting more and more pail as the year wore on. Her hair, normally perfectly placed, had become disheveled. She seemed stressed. And not just the normal stress that teaching 60 hours a week for a small paycheck had brought upon her life. No, this was different.

As the students huddled together and slowly approached the cabin, a deep fear had crept into all of their brains. They had never done anything without first checking for consent from an adult. A large group of kids decided to stay in the very spot where they had been left by the bus, opting to collect their snacks in a pile and await for their parents or the teacher to come back for them.

The smaller group, led by Sheri, progressed into the cabin. Inside, it was musty. There were strange all-in-one desk looking torture devices set in rows in the room. An old interactive whiteboard from yesteryear hung tilted off one of the walls. What was this place?

One boy named Leo chimed in, “This almost looks like a learning studio. I think they used to call it a ‘classroom’.”

Other students nodded. There were old, sun-bleached bulletin boards on the walls and alphabet letters strung up across the top of the wall (although four letters E,H,L, and P were missing).

At the front of the room was an extremely large desk. The students had never seen a desk of this size. One of them commented, “It almost looks like it could be a teacher’s desk, but teachers don’t have desks anymore so I’m confused.”

On the middle of the desk laid a single sheet of paper.

Sheri, with hands shaking, picked up the note.

You have all lived very scheduled lives. You have amazing skills when it comes to using technology, however, none of you have ever learned how to think or entertain yourselves. So today, I’m going to challenge you.

You have no directions. You can do whatever you want. There are no devices to help guide you out of these woods. You are miles from any resources or Wifi. There is only one way out.

Once you have figured out how to think for yourself, you will be freed from the forest.

A loud SCREAM came from the cabin. The group of kids outside sprawled and ran in all directions.

I wish this tale had a happy ending, but it doesn’t.

The students would never leave those woods.

And to this day, if you ever hover near the old school house planted in the middle of woods, you might hear their confused cries for help and direction as they sadly never figured out how to think for themselves.