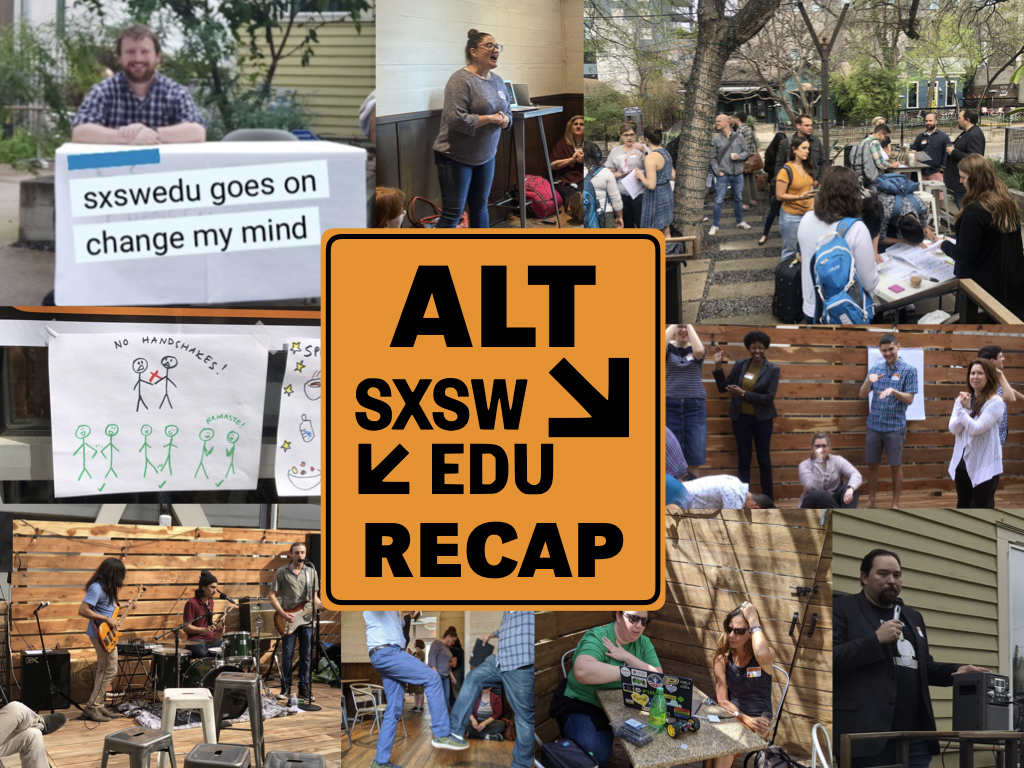 Last Friday was an upsetting day. The conference I had attended for the past 10 years (SXSWedu) announced it was cancelling along with the larger SXSW that often brings thousands of people to Austin and over $356 million dollars in revenue to the city. Whether you agree or disagree with the decision, I was frustrated. I realize that being frustrated at something like a conference cancellation is extremely small in the scope of what is happening around the world, but I’m just being honest. This event was the most diverse conferences I have attended, and selfishly, I looked forward to growing global collaborations and connections as well as the sharing of ideas for learning.

That night, I agreed to meet my friends downtown at their new bar, called Idle Hands, on Rainey Street here in Austin. When I arrived the mood was somber. The service staff were depressed. Uber drivers, stage crew, bands, waiters, bartenders, valets, food trucks and more make a significant amount of their income from the SXSW event and all the subsidiary events that happen before and after it takes place. In the case of one of the bartenders I spoke with, he makes almost half of his yearly income in the span of just a few weeks because of it.

While this was happening, I pulled out my phone to look at see what the reactions were on Twitter, Facebook, and text messages. The responses ranged from “thank god they cancelled it” to those that were now stuck here because of the late cancellation. Many of these people were from overseas.

People like Ryan King from China and Tracy Mehoke from Wisconsin (by way of Abu Dhabi) were here in Austin and now wondering what to do with themselves. Others like Krista Vaught from Florida and Vitor Bruno from Brazil were educators in a similar predicament of having already arrived here and literally collecting their baggage when the announcement came out. These people began to find each other through various social platforms and quickly formed an “EdUnconference” Slack channel as a way to connect and try and coordinate some meet-ups around Austin.

While this was happening, an idea started to rise up in my mind. We have all of these brilliant minds trapped in Austin, but no way for them all to gather. I’ve hosted educational conferences for years in Austin and around the world. While those events take months to plan, I didn’t have that kind of time. I had 72 hours.

I also needed a place. Enter Idle Hands. Like many bars in Austin, their space had been rented out for SXSW, but those sponsors had since dropped out leaving a fully-stocked event space with complete with service staff but missing an important thing….people. I pitched them the idea of hosting “an alternate event” to SXSWedu. They were all for it and excited to help out. The owners of Ranch Hand, a local food truck that had taken up residence in the kitchen of Idle Hands said, “We have nothing to do and would love to have some people to serve!”

I immediately put the news out on Twitter that night.

Within minutes Krista reached out and told me about the Slack channel. Magic started to happen. On Saturday, I got up and bought a domain and built a website out for AltSXSWedu.com. I threw together a quick form for presenters to submit ideas (so quick that I left off the field for people to enter a presentation title!) and an Eventbrite page for people to get their free tickets. By mid-day Sunday we had 20 submissions with over 50 people that were listed as attendees and I started to think…this might actually happen.

On Monday, I met up with Krista and Tracy for the first time in person. We started going over the logistics of what the 2-day event would look like and how we could utilize the space (a former house converted into a bar) to facilitate discussions and learning. I’m the type of person that thinks and creates better collaboratively and having these two share and bounce ideas off of was amazing. Krista agreed to lead the opening session with an activity called “Collaborating with Strangers” and Tracy was going to MC some “Flash Talks” – quick, 5-minute talks with no slides, for anyone that wanted to get up and speak. We had poetry, topic mixers, round-tables, and immersive experiences. Late Monday night some signage was put together and name badges were created.

I reached out to some local vendors like Bulb, Kahoot, Squarecap, Firia Labs and Brainpop to cover items like waters, coffee and snacks for attendees. I contacted good friend Humberto Perez to see if his band MariaBloom and another band could play both days to wrap up the event. All of this happened in less than 48 hours. My INCREDIBLE wife, Renee, who always is so supportive of my crazy creative ideas, was by my side for the next two days helping run registration, logistics and answer questions.

Then Tuesday morning arrived. I didn’t know what to expect. As people started to arrive, I grabbed my portable speaker and started blaring some Stevie Ray Vaughn to welcome our international guests to the event. The learning could not be stopped!

In all, over 120 people would attend and over 30 sessions were shared either face to face or virtually. Using my daughter’s portable karaoke speaker, I kicked off the event by telling everyone that they were not attendees….they were organizers.

We invented the #AltHandShake (photo left)

We argued about educational strategies and theories.

We collaborated on how to address the rapid shift to online learning that was about to take place.

As the event wrapped up on Wednesday afternoon, I was physically exhausted but mentally and emotionally fulfilled. I made connections and learned ideas that I rarely do at a large conference. This event COULD NOT have happened without the support of the amazing companies like those mentioned above and amazing people like Ryan, Tracy, Krista, Renee, Anne, Jami, Humberto, Vitor, Meghdut, Pauline, Anna, Claudio, Carolyn, Al, Nikki, Rebecca, Sarathi, Maru, Suzanne, Reyna, and many, many more that made this event happen.

Minds from all over the world, brought together because of a virus, showing me that learning can’t be stopped even when the world around us is facing uncertainty.

I will cherish the new connections I made, the things I learned and the memories I made for the rest of my life.

We did have a few news agencies come by to see what we were up to. If you’re interested in hearing more, here are links to their stories about AltSXSWedu:

EdSurge – SXSWEdu is Called Off. But the Sessions and Parties Are Still Happening

1 comment on “Because Nothing Can Stop the Learning! An #AltSXSWedu Recap”