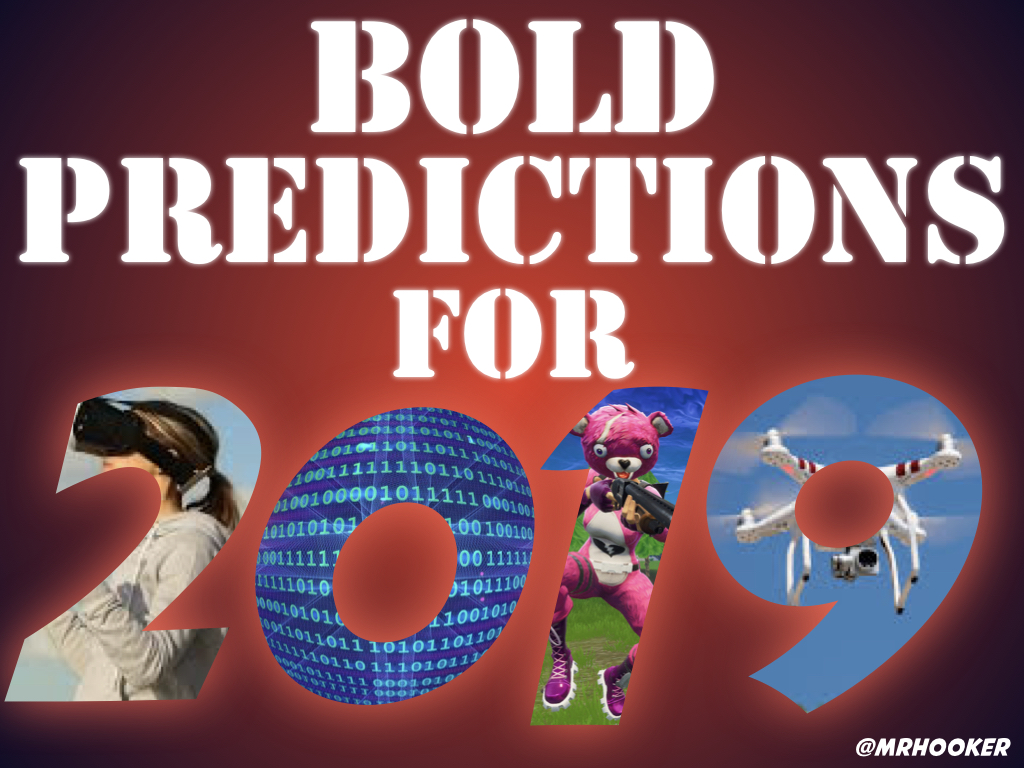 It’s that time of year when we like to make resolutions, change part of our diet, and set out with some goals for our personal and professional selves. For me, this time of year marks an annual tradition of making some bold predictions that I think might come true in the coming year. Last year was by far my most successful year of predictions coming true (or mostly true), so with my new found (false) confidence, I’ve decided to really step it up this year with my prognostications.

I realize that some of this may seem far-reaching, but hey, I said “BOLD” right?  Also, in looking back at some of my previous years, I noticed that my time frame may have been off by a year or two, but they still came true….eventually. (For the record, I don’t count those as accurate predictions)  These predictions are a mix of technology, education, and some fun. Part of what makes this interesting is your feedback, so please drop your bold predictions in the comments below the post. Even if it’s crazy!

This past holiday, my lovely wife surprised me with an Oculus GO VR headset. This all-in-one headset doesn’t require a computer or a phone to use and within a few minutes of use, I immediately become both motion sick and mesmerized with possibilities in Education. Even though the graphics aren’t quite there yet, just the experience of riding on a virtual roller coaster or even looking out the window of a 97-story building immediately immerse you in the world.  Imagine what that could look like in a classroom?  I know that Google Expeditions and Nearpod 360 Cities do some of this, but the world I’m envisioning has interactions with the students. Imaging taking part in the American Revolution or being able to be a member in the audience during Mozart’s “Marriage of Figaro“?  Or better yet….why not put yourself in the shoes of the actual conductor?  With the now lower cost of these all-in-one devices and the mobility (no more lugging around a huge desktop) I can see a near future where Interactive VR plays a role in the learning experiences of our kids.

The Universal Translator will make learning a foreign language obsolete

This past couple of years, Google and other companies have really tried to capitalize on the idea of having a Universal Translator (think Ohura from Star Trek). The current versions of this are still fairly clunky, but I can see a not so distant future where learning a foreign language might not be that important. This doesn’t mean that all those LOTE (Languages Other Than English) teachers will be out of a job though. With an effective universal translator, knowing the culture and customs of foreign lands will become even more important should you accidentally say or gesture the wrong thing.

Ok, so this one is a little morbid, but is it really that far-fetched?  I wrote this post last year about When Smart Homes Attack about how my kids almost froze and starved to death because I changed the wireless router on a snow day. There are a TON of smart home devices coming out of CES this week (including this awesome SMART block of wood) and with the “Internet of Things” taking over homes across the country, there are some inherent dangers. Like imagine someone asking Alexa to play Turn up the Heat by Justin Bieber only to have it accidentally fire up the fireplace or stove? I see a future Black Mirror episode or crime novel in our future where someone hacks the smart home to kill its inhabitants.  (Ok…this is getting way too dark now)

Netflix will launch an EDU Version of its service

I’ve been pitching this to higher-ups at Netflix for the past couple of years, but all my emails and tweets go without a response. It seems to me that this is an opportunity for Netflix to expand its service to the educational market. My daughters already have their own customized channels full of educational content like Bill Nye and Magic School Bus. Netflix even offers one-time educational screening permission for certain programs and movies. We don’t want an educational environment where kids are just mindlessly consuming content, so this would have to be done with some fidelity, but I think there could be a potential use case where the teacher acts as the moderator of customized content for each student under a EDU subscription. Instead of binge watching…there would be binge learning!

It seems that more and more we are facing an internal conflict of too much screen time (remember the smart wood I mentioned earlier?). Associated with us being glued to our screens is the feeling that we are doing too much “nocializing” (going out with friends only to be on your phone the entire time) rather than actual interaction. Don’t believe me? Walk through the airport sometime and see how many strangers are interacting with each other. Our district just went through a lengthly process evaluating our own use of technology in the classroom. The major concerns around screen time in schools is a valid one especially when you couple it with the heavy use of screens at home with kids after school. One of the major outcomes of our research was that we need to really educate and promote the purposeful use of technology in and out of schools. This isn’t just a school problem, it’s a social one. I predict that this year, in response to this, we will see restaurants begin to set up non-device zones for those that choose to not have their devices out. The only exception will be for people using their phone to read this post. (Ha!)

Someone will write a blog/paper using only predictive text

Imagine the world of the future and we can have access to our new home app using a mobile device?  (that was all written with predictive text…scary isn’t it?)  Surely someone will use predictive text to send a love letter, submit a college paper or even write out their wedding vows (see next prediction). Felix Jacomino actually crowd-sourced his predictive text poem a couple of years ago for his Ed Tech Poetry Slam. Here’s an example of a comedian who has re-written the Avengers script using predictive texts using an online tool called botnik. This could be a terribly lame prediction (begin predictive text) but it would also make the best way to play with some friends.  Um….okay?

A couple will get married over Facetime

A couple of years ago I became an ordained online minister in order to be the officiant at my buddy Chris Parker’s wedding. It seems to me, that if for $50 and an online application I can become ordained, then surely some couple out there can be married without being physically in the same location. In doing some quick internet digging, it appears that getting married over the internet is still not legal. However, my guess is that with modern laws being updated all the time and with the hustle and bustle of our modern lifestyles, someone will get married via video chat. Some questions I would have around this would be: Do they have to put it online so there are witnesses? Can the officiant be virutal as well or can they be married by a virtual assistant (A.I.)? How do you kiss the bride? I can hear it now: “Do you have the Ring (camera)?”

There will be a FortniteEDU for schools

Remember when people laughed at the thought of Minecraft ever making its way to the classroom? A Microsoft buy-out later, MinecraftEDU has made it into our schools. Imagine a Battle Royale where you have to solve math problems to get weapons or complete a simile to get a shield potion? Doesn’t seem that far-fetched now does it? If anyone can make this happen, my money would be on Mike Washburn who has already done some work in this space. He was the first educator I can recall showing and presenting the educational values of Minecraft way back when. C’mon Mike! Make it happen!

A SMART toilet will save someone’s life

Yes, these are a thing. It seems hard to imagine, but considering there is now something called “Poo Purri”, it doesn’t seem that far fetched. In fact, Kohler just announced their high-end smart toilets complete with mood lighting and built in speakers. While that’s cool, futurist Michio Kaku predicts in this video that smart toilets have the potential to detect a finite amount of cancer cells before it grows into a tumor. How incredible would that be? Also, I’m posting this because I have some guilt from an earlier prediction claiming that a smart home would kills someone (there’s always a balance, right?) These toilets will have an impact in schools and public sector jobs too as they will have the ability to detect drugs/alcohol in student-athletes or politicians, which could get real interesting…

Last year, as we transitioned from iPadpalooza to LearnFestATX we went into “beta” mode to test out some new concepts to engage adult learners. Admittedly, not all of them were great. However, a few of the ideas were HUGE successes that we plan to feature along with other unique engagement mechanisms this June. From silent disco keynotes to the “What’s HOT in Ed Tech” challenge, this summer’s event in Austin will hit you on all fronts. This year’s theme is “Ready Learner One” with a play on classic video games from our past. So if you’re ready to Dig Dug deeper, be sure to register now as this is should to be a Knock Out!  (FYI – we are also accepting calls for proposals until Feb. 8 – accepted presenters can be part of the fun for FREE)

Largely due to costs and complex programming, robotics has remained an after-school program or secondary elective. However, with new models of robotics like Sphero and Trashbots hitting the market at an affordable price AND coming with easy-to-use curriculum integration tools, this will be the year that robot goes from a “fun Friday” activity to mainstream. I may be cheating a bit on this one as Fred Benitez recently shared some science teachers at our middle school doing that very thing with Sphero and Anatomy:

Third time is a charm right? I’ve had this false prediction on this post for the last two years and I think it’s time to make it happen. I even bought a website for it this past weekend so it better become a reality even if no one buys it. 🙂

There you have it. Twelve different bold predictions (a record for this post) on things I believe will happen during 2019. Like I stated at the beginning, I would love your thoughts on crazy, bold ideas that could happen in our near future as well. Comment below and thanks for reading!

0 comments on “Bold Predictions Sure to Go Wrong for 2019”